Kōki Hirota (廣田 弘毅, Hirota Kōki, 14 February 1878 – 23 December 1948) was a Japanese diplomat and politician who served as the 32nd Prime Minister of Japan from 9 March 1936 to 2 February 1937. Originally his name was Jōtarō (丈太郎). He was executed for war crimes committed during World War II. 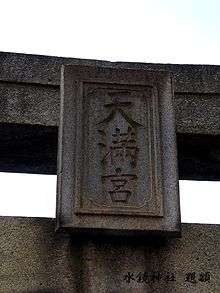 Hirota was born in Kaji-machi dori (鍛冶町通り) in what is now part of Chūō-ku, Fukuoka city, Fukuoka Prefecture. His father was a stonemason whose family name was Tokubei (徳平), and who was adopted into the Hirota family. Tokubei married Take (タケ), a daughter of the president of a Japanese noodle company. On 14 February 1878, the couple had a son, whom Tokubei named Jōtarō (丈太郎). They later had three more children. Tokubei's name is engraved on the epigraph which recognized masons who contributed to the construction of a statue of Emperor Kameyama in Azuma park (東公園) in Fukuoka city.

Hirota's writing was recognized as good from a young age; the name plate of the torii gate of Suikyo Shrine was written by Hirota when he was 11.[1][2] After attending Shuyukan, he continued his education at Tokyo Imperial University and graduated with a law degree. One of his classmates was postwar Prime Minister Shigeru Yoshida.

After graduation, Hirota entered the Ministry of Foreign Affairs to become a career diplomat, and served in a number of overseas posts. In 1923, he became director of the Europe and America Department within the Foreign Ministry. After serving as minister to the Netherlands, he was ambassador to the Soviet Union from 1928 to 1932.

In 1933, Hirota became Foreign Minister in the cabinet of Prime Minister Saitō Makoto, just after Japan withdrew from the League of Nations. He retained the position in the subsequent cabinet of Admiral Okada Keisuke.

As Foreign Minister, Hirota negotiated the purchase of the Chinese Eastern Railway in Manchuria from Russian interests. He also promulgated the Hirota Sangensoku (the Three Principles by Hirota) on 28 October 1935 as the definitive statement of Japan’s position towards China. The three principles were the establishment of a Japan–China–Manchukuo bloc, the organization of a Sino-Japanese common front against the spread of communism, and the suppression of anti-Japanese activities within China.[3] 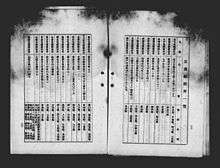 In 1936, with the radical factions within the Japanese military discredited following the 26 February Incident, Hirota was selected to replace Okada as Prime Minister of Japan. Hirota placated the military by reinstating the system by which only active-duty army or navy officers could serve in the Cabinet posts of war minister or navy minister. The military had abused this system in the past to bring down civilian governments.

In terms of foreign policy, the Anti-Comintern Pact with Nazi Germany and Fascist Italy was signed during his premiership. This treaty was the predecessor to the Tripartite Pact of 1940.

Hirota's term lasted for slightly less than a year. He resigned after a disagreement with Hisaichi Terauchi, who was serving as the war minister, over a speech by Kunimatsu Hamada. Kazushige Ugaki was appointed as his successor, but was unable to form the government due to army opposition. In February 1937, Senjūrō Hayashi was appointed to replace Hirota as prime minister.

Hirota soon returned to government service as foreign minister under Hayashi's successor, Prince Konoe Fumimaro. During his second term as foreign minister, Hirota strongly opposed the military's aggression against China, which completely undermined his efforts to create a Japan-China-Manchukuo alliance against the Soviet Union. He also spoke out repeatedly against the escalation of the Second Sino-Japanese War. The military soon tired of his criticism and forced his retirement in 1938.

In 1945, however, Hirota returned to government service to lead Japanese peace negotiations with the Soviet Union. At the time, Japan and the USSR were still under a non-aggression pact, even though the other Allied Powers had all declared war on Japan. Hirota attempted to persuade Joseph Stalin's government to stay out of the war, but he ultimately failed; the Soviet Union declared war on Japan in between the atomic bombings of Hiroshima and Nagasaki. 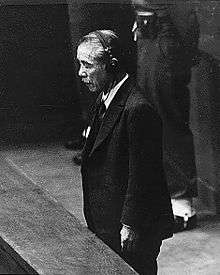 Koki Hirota listening to his death sentence being read by Sir William Webb, 1948

Following Japan's surrender, Hirota was arrested as a Class A war criminal and brought before the International Military Tribunal for the Far East. He offered no defense and was found guilty of the following charges:

He was sentenced to death by hanging, and was executed at Sugamo Prison. The severity of his sentence remains controversial, as Hirota was the only civilian executed as a result of the IMTFE proceedings. It is often stated that the main factor in his death sentence was the fact that he was party to information about what is now known as the Nanjing Massacre, about which he is alleged to have telegraphed to the Japanese embassy in Washington D.C. As foreign minister, Hirota received regular reports from the War Ministry about the military's atrocities, but lacked any authority over the offending military units themselves. Nonetheless, the tribunal condemned Hirota's failure to insist that the Japanese Cabinet act to put an end to the atrocities.[4] Other possible factors in Hirota's sentence included his signing of the Tripartite Alliance, and the antipathy of China's Kuomintang government towards the Hirota Sangensoku, which they viewed as providing justification for Japan's aggression against China in the Second Sino-Japanese War (which began during Hirota's second term as Foreign Minister).