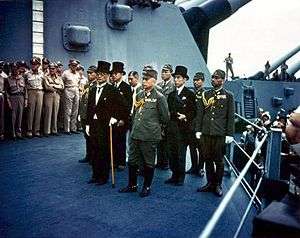 Shigemitsu (with cane) on board USS Missouri, September 2, 1945 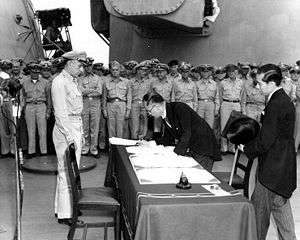 Shigemitsu signs the Japanese Instrument of Surrender at the end of World War II, accompanied by Toshikazu Kase (right)

Mamoru Shigemitsu (重光 葵, Shigemitsu Mamoru, July 29, 1887 – January 26, 1957) was a Japanese diplomat and politician in the Empire of Japan, who served as the Japanese Minister of Foreign Affairs at the end of World War II and later, as the Deputy Prime Minister of Japan.

Shigemitsu was born in what is now part of the city of Bungo-ōno, Ōita Prefecture, Japan. He graduated from the Law School of Tokyo Imperial University in 1907.[1] After World War I, he served in numerous overseas diplomatic assignments, including Germany, the United Kingdom, and briefly as consul at the Japanese consulate in Seattle, Washington in the United States. Following the Mukden Incident, Shigemitsu was active at various European capitals attempting to reduce alarm at Japanese military activities in Manchuria. During the First Shanghai Incident of 1932, he was successful in enlisting the aid of western nations in brokering a cease-fire between the Kuomintang Army and the Imperial Japanese Army. On April 29, 1932, while attending a celebration for the birthday of Emperor Hirohito in Shanghai, a Korean independence activist, Yoon Bong-Gil threw a bomb at a reviewing stand killing General Yoshinori Shirakawa and wounding several others, including Shigemitsu.[2] Shigemitsu lost his right leg in the attack, and walked with an artificial leg and cane for the rest of his life.

Shigemitsu later became ambassador to the Soviet Union, and in 1938 negotiated a settlement of the Russo-Japanese border clash at Changkufeng Hill. He then became Japan's ambassador to the United Kingdom during a period of deteriorating Anglo-Japanese relations, most notably the Tientsin incident of 1939 which pushed Japan to the brink of war with the United Kingdom, until he was recalled home in June, 1941. Shigemitsu was highly critical of the foreign policies of Yōsuke Matsuoka, especially the Tripartite Pact, which he warned would further strengthen anti-Japanese sentiment in the United States. Shigemitsu spent two weeks in Washington, D.C. on the way back, conferring with Ambassador Kichisaburō Nomura, attempting unsuccessfully to arrange for direct face-to-face negotiations between Prime Minister Fumimaro Konoe and US President Franklin Roosevelt.

Shigemitsu's attempts to stave off World War II angered the militarists in Tokyo, and only two days after the attack on Pearl Harbor, Shigemitsu was sidelined with an appointment as ambassador to the Japanese-sponsored Reorganized National Government of China. While in China, Shigemitsu argued that the success of the proposed Greater East Asia Co-Prosperity Sphere depended on the equal treatment of China and other Asian nations with Japan.[3] On April 20, 1943, in a move that was viewed as a sign that Japan might be preparing for a collapse of the Axis Powers, Japan's Prime Minister Hideki Tōjō fired foreign minister Masayuki Tani in favor of Shigemitsu, who had been steadfast in his opposition to the militarists. He was thus foreign minister during the Greater East Asia Conference.[4] The American press often referred to him in headlines as "Shiggy".[5] From July 22, 1944, to April 7, 1945, he served as Minister of Greater East Asia in the Koiso administration, and again briefly in August 1945 in the Higashikuni administration.

Shigemitsu as civilian plenipotentiary, along with General Yoshijirō Umezu, signed the instrument of surrender on September 2, 1945.

Despite Shigemitsu’s well-known opposition to the war, at the insistence of the Soviet Union, he was taken into custody by the Supreme Commander of the Allied Powers and held in Sugamo Prison under charges of war crimes. Despite a signed deposition by Joseph Grew, the former ambassador of the United States to Japan and over the protests of Joseph B. Keenan, the chief prosecutor,[6] Shigemitsu’s case came to trial and he was convicted at the International Military Tribunal for the Far East and was sentenced to 7 years imprisonment on Counts 29, 31, 32 and 33 for waging “an aggressive war”. He was paroled in 1950.

Shigemitsu served as Foreign minister from 1954 until 1956 under the 1st through 3rd Hatoyama administrations. He represented Japan at the 1955 Asian–African Conference held in Indonesia, marking the first return of Japan towards participation in an international conference since the League of Nations. The following year, he addressed the United Nations General Assembly, pledging Japan’s support of the founding principles of the United Nations and formally applying for membership. Japan became the 80th member of the United Nations on December 18, 1956.[7] Shigemitsu also travelled to Moscow in 1956 in an attempt to normalize diplomatic relations and to resolve the Kuril Islands dispute. The visit resulted in the Soviet–Japanese Joint Declaration of 1956.

Shigemitsu died of angina pectoris, aged 69, at his summer home in Yugawara, Kanagawa.