This article is about the transport of cargo by any means. For other uses, see Shipping (disambiguation). 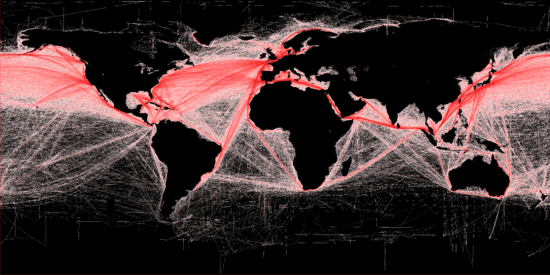 This map of shipping routes illustrates the relative density of commercial shipping in the world's oceans.

Freight transport is the physical process of transporting commodities and merchandise goods and cargo. The term shipping originally referred to transport by sea, but is extended in American English to refer to transport by land or air (International English: "carriage") as well. "Logistics", a term borrowed from the military environment, is also fashionably used in the same sense.

Land or "ground" shipping can be by train or by truck (International English: lorry). In air and sea shipments, ground transport is required to take the cargo from its place of origin to the airport or seaport and then to its destination because it is not always possible to establish a production facility near ports due to limited coastlines of countries. Ground transport is typically more affordable than air, but more expensive than sea especially in developing countries like India and Pakistan, where inland infrastructure is not efficient.

Shipment of cargo by trucks, directly from the shipper's place to the destination, is known as a door to door shipment and more formally as multimodal transport. Trucks and trains make deliveries to sea and air ports where cargo is moved in bulk.

Much shipping is done by actual ships. An individual nation's fleet and the people that crew it are referred to as its merchant navy or merchant marine. Merchant shipping is the lifeblood of the world economy, carrying 90% of international trade with 102,194 commercial ships worldwide. On rivers and canals, barges are often used to carry bulk cargo.

Cargo was transported by air in specialized cargo aircraft and in the luggage compartments of passenger aircraft. Air freight is typically the fastest mode for long distance freight transport, but also the most expensive.

Intermodal freight transport refers to shipments that involve more than one mode. More specifically it usually refers to the use of intermodal shipping containers that are easily transferred between ship, rail and truck.[1] 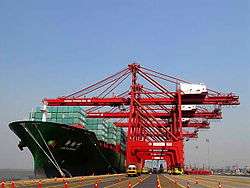