Founded in 1969 to deliver documents between San Francisco and Honolulu, the company expanded its service throughout the world by the late 1970s. The company was primarily interested in offshore and inter-continental deliveries, but the success of FedEx prompted their own intra-US expansion starting in 1983. DHL expanded to countries that could not be served by any other delivery service, including Cuba, the Soviet Union, Eastern Bloc, Iraq, Iran, China, Vietnam and North Korea.

Old DHL logo before its purchase by Deutsche Post AG 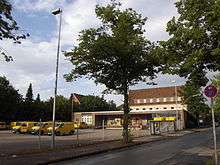 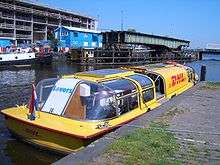 DHL boat in Amsterdam, carrying DHL delivery bicycles on board. 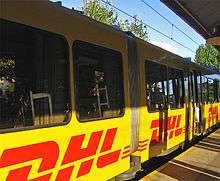 While Larry Hillblom was studying law at University of California, Berkeley's Boalt Hall School of Law in the late 1960s, he accepted a job as a courier for the insurance company Michael's, Poe & Associates (MPA). He started running courier duty between Oakland International Airport and Los Angeles International Airport, picking up packages for the last flight of the day, and returning on the first flight the next morning, up to five times a week.[6]:12

After he graduated, Hillblom met with MPA salesman Adrian Dalsey and they planned to expand MPA's concept of fast delivery to other business enterprises. They flew between Honolulu and Los Angeles, transporting bills of lading for their first client, Seatrain Lines.[6]:17

Hillblom put up a portion of his student loans to start the company, bringing in his two friends Adrian Dalsey and Robert Lynn as partners, with their combined initials of their surnames as the company name (DHL). They shared a Plymouth Duster sedan that they drove around San Francisco to pick up the documents in suitcases, then rushed to the airport to book flights using another relatively new invention, the corporate credit card. As the business took off, they started hiring new couriers to join the company. Their first hires were Max and Blanche Kroll, whose apartment in Hawaii often became a makeshift flophouse for their couriers.

In the 1970s, DHL was an international delivery company, and the only one offering overnight service. The only major competitor in the overnight market was Federal Express (FedEx), which did not open its first international service until 1981, expanding to Toronto, Ontario, Canada. Nevertheless, the domestic market was extremely profitable, and DHL was the third largest courier behind FedEx and the UPS.

All US domestic flights were handled by DHL Airways, Inc. which in 2003 was renamed ASTAR Air Cargo following a management buyout. DHL's first airline still remains with over 550 pilots in service, as of October 2008.[7] 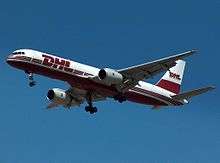 Most of DHL Express' business is incorporated as DHL International GmbH.

Major competitors include FedEx, UPS, TOLL, TNT and national post carriers such as United States Postal Service (USPS) and Royal Mail. However, DHL has a minor partnership with the USPS, which allows DHL to deliver small packages to the recipient through the USPS network known as DHL Global Mail, now known as DHL eCommerce. It is also the sole provider for transferring USPS mail in and out of Iraq and Afghanistan.

DHL offers worldwide services, including deliveries to countries such as Iraq, A, and Myanmar (formerly Burma). As it is German-owned, DHL is not affected by U.S. embargoes or sanctions and will ship to Cuba[25] and North Korea.[26][27] However, there are strict codes for delivering to North Korea, as the country has shaky relations with the West.[26]

As DHL is no longer a United States company, it is not allowed to make domestic flights between U.S. airports. DHL contracts these services to other providers.[20]

DHL has taken measures to control their environmental impact by use of the alternative fuel vehicles. DHL changed vehicles in certain delivery fleets in order to use alternative fuels. Certain new vehicles use compressed natural gas, to which DHL hopes to convert 50% of their vehicles in the future.[28]

On 16 September 2005, DHL won a High Court injunction establishing an exclusion zone around each of its 288 buildings in the UK as well as the homes of its 18,000 UK employees. The firm has been the subject of a campaign of intimidation because of their business with Huntingdon Life Sciences. The judge banned protesters from coming within 50 yards (46 m) of any DHL premises or the homes of their employees as well as any organized demonstration within 100 yards (91 m) unless the police had been given four hours' notice. The injunction also protects anyone doing business with DHL from intimidation.[29]

A Tupolev Tu-204C operated for DHL by Aviastar-TU at Sheremetyevo International Airport in Moscow, Russia.

Deutsche Post owns five airline subsidiaries operating for DHL Express, operating a total of 96 aircraft and another 21 aircraft on orders, which are collectively referred to as DHL Aviation. Additionally, DHL Express is an equal partner in a sixth airline that operates for DHL Express:

For several years, DHL was the primary sponsor of the Porsche RS Spyder Le Mans Prototypes in the International Motor Sports Association American Le Mans Series. DHL also sponsors Ryan Hunter-Reay's #28 IndyCar Series car for Andretti Autosport since 2011. With DHL, Hunter-Reay won the championship for the 2012 IndyCar Series season as well as the 2014 Indianapolis 500. DHL were the main title sponsor of the Jordan Formula One team during 2002. Since then, DHL has become a regular track-side sponsor at various races throughout each year, as well as becoming the 'Official Logistics Partner' of the sport. Since 2007, they also sponsor the DHL Fastest Lap Award for the driver that achieves the most fastest laps in a season.[30]

A Jordan Grand Prix Formula One car at the US Grand Prix at the Indianapolis track.

Manchester United Football Club announced them as their first training kit sponsor in August 2011, agreeing to a four-year deal with DHL reported to be worth £40 million; it is believed to be the first instance of training kit sponsorship in English football.[31][32] In 2014, FC Bayern Munich agreed to a six-year sponsorship deal with DHL.[33] In 2012, the company became the main sponsor of League of Ireland club Bohemian F.C.[34]

DHL is the current title sponsor of the South African Western Cape Rugby Union teams Western Province and the Stormers. This is came into effect on 1 January 2011 for a period of three years.[35]

For the 2011–12 Volvo Ocean Race DHL was one of four race partners providing logistics for this event.[36][37]

Expanding its support to various cultural endeavors, DHL signed as the Official Logistics partner for Cirque du Soleil. DHL transports up to 2000 tones and 80 freight containers utilizing air, sea and land to transport the equipment from one city to the next.[39]

DHL is a major sponsor of Surf Life Saving Australia.