Siddheshwar(IPA:Sid'dhēśvar) or Siddarameswar(IPA:Sid'dha rāmēśvar)) also known as Siddhram was one among the five acharya ("saint") of the Lingayat faith (also known as Veerashaivism). Siddheshwar was a great contributor to Lingayatism religion. He was a great mystic and a Kannada poet who was a part of Basavanna's Veerashaiva revolution during the 12th century. His philosophy was one of service to mankind, the path of karmayoga. Siddarama was instrumental in saving the vachana literature from destruction.

Siddharama (c.1150) claimed to have written 68,000 vachanas out of which only 1379 are available.[1] Along with Basava, Allama Prabhu, Devara Dasimayya and Channabasava, Siddharama is regarded as the most acknowledged and respected poets. Vachanakaras wrote in the genre of Veerashaivas, under Kannada literature from the mystic period. He shares the world view of other vachana poets in his rejection of blind conventions of caste and sex discrimination and emphasis on realization through personal experience. He too borrows Metaphors from diverse spheres of everyday life. Apart from vachanas,he has written several devotional works in tripadi. writing three-line verse, used from the 7th century.

Siddarama was the son of Muddanna and Suggaladevi and the first Social Spiritual guru. As part of Sharana revolution in the 12th century, he encouraged inter-caste marriages. He undertook many irrigation projects for the common good. He saw divinity in every existence of the world.

Shri Siddharameshwara was a historical figure of the 12th century whose "Karmayoga" about his native land, Solapur, turned him into a God-figure in time. There was a great saint Shri Siddarama, who preached the teachings of Shri Basaweshwara. A young girl, inspired by the teachings of this saint wished to marry him. Shri Siddaram denied her but gave permission to marry with his Yogadanda. The same marriage function is celebrated every year on the Makar Sankranti for three days at Bhogi, Sankrant and Kinkrant. The Nandi Dhwajas are presumed as Bride and Groom for the marriage. This festival falls around 14 January every year. A fair popularly known as Gadda Yatra is arranged for fifteen days at this time of the year.

Siddheshwar had gained the "Siddhi". As Solapur was a drought prone area, Shri Siddharameshwar dug a lake with the help of 4000 "Sharanas" to solve the problem of potable water. 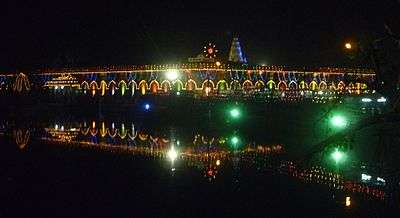 Lord Shiva appeared in the guise of a Jangam Swamiji and called himself Mallinath from Shrishail. The place where Mallinath met Siddharam is known as 'Gurubhet' which is now in front of the Collector's Bungalow in Solapur, Maharashtra. This Jangam requested Siddharama to serve him hot fried tender Jowar. Next he demanded curd-rice in order to sooth the burning sensation in his stomach. Siddharama ran to his home and asked his mother for curd-rice. On his return to the fields, he searched for him, shouting, "Mallayya, Mallayya" did not find him. There he inquired the Kawadi Jangams who were on a pilgrimage to Shrishail. They promised to show him Mallayya. His quest for Mallayya made him determined to go to Shrishail. At Shrishail he was shown the Mallikarjuna Jyotirlinga, but this linga of black stone did not please him. Then he inquired every object and every people about the whereabouts of Mallayya running over the length and breadth of Shrishail. Siddharama began to weep.

His tears were collected in a tank in the ground, which presently became known as Nayan-Kunda. When Siddeshwar reached the brink of a very deep valley called 'Rudrakada' and peeping down he yelled out "Mallayya, Mallayya!, but he did not appear. As Siddharama was about to jump in the valley., Lord Mallikarjun (Mallinath) appeared and caught hold of him by his hands.He visualized Mallayya telling him to return to Sonnalige and work towards making it the second Srishailam. The Lord pacified him and offered 'Vajrakundal' and 'Yoga Danda' which possesses the potential to fulfill all wishes. The Lord Mallinath asked Siddharam to return to Sonnalgie to end grief on earth. The Lord Mallinath assured him that he himself would appear in the form of Shivalinga in Sonnalgie. Shivayogi Siddharama returned to Sonnalgie; the ruler of that time Nannappa and his wife Chamala Devi gave him 5 kosa land as they were told to do by a vision of Lord Shiva. Shivayogi Siddharama consecrated 68 lingas by the holy hands of Jagadguru Kapilasiddha Panditardhya, within the Panch Crosh of Sonnalgie making Sonnalgie a "Kshetra" (holy place).

Siddarama returned to Sonnalige and involved himself in public works. He dug lakes and built temples. He encouraged people to conduct mass weddings, and do other works, which would benefit mankind. Many people joined him in transforming Sonnalige.

Allama Prabhu’s purpose is to make Siddharama worship Ishtalinga.Hence he proposed that Siddharama should accompany him to Kalyana, which was then the home of Basavanna and Ishtalinga worship.At Anubhava Mantapa Allama, Siddarama, Chennabasavanna, Basavanna and others discussed the need for Istalinga.

Siddarama accepted Chennabasavanna as his Guru. Chennabasavanna performed the Istalinga initiation for Siddarama.After his initiation, Siddarama made rapid progress along the path of Shivayoga, and in course of time succeeded Chennabasavanna on Shunya Simhasana, or the pontificial throne. Siddarama participated in various discussions of the Anubhavamantapa. These discourses made him a Shiva yogi. He returned to Sonnalige and entrusted his work to Havinahala Kallaiah. He constructed a cave in the middle of a lake. There he practiced Shiva yoga until he attained his Ikya state.

Shivayogi Siddharama consecrated 68 lingas by the holy hands of Jagadguru Kapilasiddha Panditardhya, within the Panch Crosh of Sonnalgie making Sonnalgie a "Kshetra" (holy place). Siddarama returned to Sonnalige and involved himself in public works. He dug lakes and built temples. He encouraged people to conduct mass weddings, and do other works, which would benefit mankind. Many people joined him in transforming Sonnalige. He returned to Sonnalige and entrusted his work to Havinahala Kallaiah. He constructed a cave in the middle of a lake. There he practiced Shiva yoga until he attained his Ikya state and entombed himself alive.

His influence on several contemporaneous as well as subsequent Sharanas is evident from many sources. His tradition has come down continuously from his time to ours throughout South India. Gifts and charities made in his name by kings and other rulers are recorded in inscriptions. He was an ardent believer in Action. Though he was at first inclined towards visible works such as construction of tanks and temples, installation of Lingas, establishment of alms-housed etc., as calculated to lead him to Heaven, he came later, under Prabhu’s influence, to believe that such philanthropic works by themselves, any more than the possession of the third eye, the daily access to Kailasa and such other yogic accomplishments, would not lead to Mukti. As apparent from his vachanas as well as from his biography by Raghavanka, his mastery of yoga was extraordinary. His meeting with Prabhu proved to be a turning-point in his life, and his yoga was transformed into Shivayoga. Another important stage in his life is the initiation given him by Chennabasavanna. His sojourn at Kalyana gave a new orientation to his life, living as he now did among numerous Sharanas in Basavanna’s Anubhava Mantapa, and the feeling that he was God made way for a spirit of utter submission to God.

Another important point is the citing of Siddharama's vachanas in the inscriptions of the Sevuna period. It is not known under what circumstances these vachanas came to be a part of the Sevuna inscriptions. It is possible that Siddharama's vachanas became very popular and obviously the composers of the inscriptions wanted to enhance the value of them by quoting the vachanas of Siddharama. It is also possible that Siddharama specially wrote these two vachanas as a preamble to gifts made to the temples so that nobody would have the moral courage to go against the purpose of the grant, as it had the sanction of a great saint like Siddharama. Whatever might have been the real purpose of these vachanas, there is no doubt that they were important. Many Sevuna inscriptions contain the vachanas of Siddharama. A town by name Hilli in Akkalkot was another well-known Virasaiva centre. There was a temple here dedicated to Kudala Sangamadeva which attracted pilgrims and devotees from Karnataka and other places.