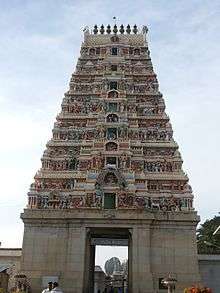 Though called as a temple, it contains Nirvikalpa Shivayoga Samadhi of Tontada Siddalinga, a Great revered Lingayat Saint who flourished during the end of 15th century.

The temple holds annual festivals during Maha Shivaratri and Ugadi.

The temple has a large wooden Chariot (Ratha). The car festival is held on the 7th lunar day of the bright fortnight of Chaitra Masa (March–April).

Sri Siddalingeshwara Swamy a great revered Sharana Saint in the path of Shiva Sharana Parampare of diffusion of Thatva of Life called VACHANAS. He travelled far and wide preaching Sharana faith which is predominantly praying with ATMA LINGA as envisaged by Basavanna, Allamaprabhu and a vast group of learned men and women from all walks of life ( 12th century in present day Bijapur district).

He performed 12 years of penance at a garden belongs to Vokkaligara Nambiyana(Thota) and hence came to be known as Thontada Siddalingeshwara Swamy. He headed the Murugi Mutha and had a large following of disciples some of who wrote on Lingayat faith and philosophy. Hence Yedeyuru is deemed to be a seat of awakened spiritual consciousness.

He travelled far and wide, preached eternal truth and performed many miracles for scores of people irrespective of their caste or creed. His life and values held by him demonstrated the divine powers attained by him to heal the sick and suffering.

He is regarded as one of the greatest Saints of the Sharana Sect in the Lingayat religion.