Basavakalyan is a town in Bidar District of the state of Karnataka, India, and was historically known as Kalyan.

Basavakalyan's history dates back to 3000 years with its name being mentioned in Guru Charitra.

Before India's independence, Basavakalyan was called Kalyani. After independence and division of states on linguistic basis in 1956, Kalyana was renamed as BasavaKalyana in memory of Vishwaguru Basavanna, a great revolutionary who established Anubhava Mantapa (spiritual democracy) in 12th century India.

It was the royal capital of the Western Chalukya (Kalyani Chalukyas) dynasty from 1050 to 1195. Someshvara I (1041-1068) made Kalyana as his capital, recognised as Kalyani Chalukyas to differentiate with Badami Chalukyas. Later ruled by Someshvara II, Vikramaditya VI, Someshvara III, Jagadhekamalla III and Tailapa III. Before this Manyakheta was their capital. During the 10th-12th centuries ruled nearly half of India,[1][2] most of the western Deccan and South India. King Vikramaditya VI had scholars in his court such as Someshwara, Bilhana (poet of Kashmir) and Vigyaneshwara (legal expert).

The earliest examples of the Kalyani Chalukya style are found at Kuknur. The Kalleshvara and Navalinga temples here bear resemblances to early Chalukya group of Aihole and Pattadkal. The Jaina temple at Lakkundi near Gadag forms the next step in the improvement of this style introducing a greater ornamental effect in the treatment of the surface.

The Kalyani style of architecture reached its maturity and culmination in the 12th century. Kasi Vishveshvara at Lakkundi, Mallikarjuna at Kuruvatti and Mahadeva Temple (Itagi) are the finest examples produced by the later Chalukya architects. The Saraswathi and Someshwara temples at Gadag are in a mutilated condition. There are nearly one hundred monuments of the period, scattered all over the Deccan, giving us information about the artistic excellence attained by the later Chalukyas of Kalyani.

Centre of social and religious movement

The centre of a great social and religious movement. In the 12th century, because of the social reformer Basava, it became a seat of learning. Basava, Akka Mahadevi, Channabasavanna, Siddarama and other Sharanas are associated with Basavakalyana. Basava, who fought against casteism and orthodoxy in Hinduism.[3]

Vishwaguru Basavanna was a great revolutionary who established spiritual democracy called "Anubhava Mantapa" in the 12th century in India(Anubhava Mantapa - which is also called as the "FIRST PARLIAMENT OF THE WORLD". Its lead by Saint Allamprabhu), and gave practical solutions to all kind of problems mankind was suffering at that time. His teachings are time tested, scientific and proven. Basava-Tatva is never ending inspiration to achieve the welfare of mankind. 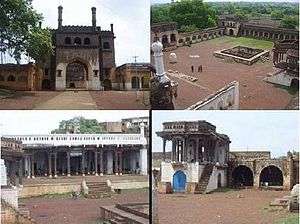 At Jalasangvi, Narayanapura and Shivapura there are temples of the Chalukya dynasty. Basaveshvara temple is at the centre of Basavakalyana. There are some Islamic monuments Moti Mahal, Hydari Mahal, Peeran Durga. And other religious places such as Gachchina Matha, Kambali Matha and Sadananda Matha.

Basavakalyana Fort was constructed by Chalukyas. It includes Jain images on its walls. There is museum in a side fort and there are Jain idols of the 10th-11th century.[4]

There is a Shiva Temple at Narayanpura which dating back to Chalukya times (11th century), 4 km from Basavakalyana.

Basavakalyan city is renowned for its educational heritage. It hosts a big number of educational institutes. Following table names a few of them:

The Basavakalyan City Municipal Council has population of 69,717 of which 36,116 are males while 33,601 are females as per report released by Census India 2011. .[6]kannada language is spoken by the majority of the population. Marathi , Hindi & Lambani are also spoken in the city.