This article is about a historical region in British India. For other uses of the name, see Punjab (disambiguation).

Punjab, also spelled Panjab, was a province of British India. Most of the Punjab region was annexed by the East India Company in 1849, and was one of the last areas of the Indian subcontinent to fall under British control. It comprised five administrative divisions — Delhi, Jullunder, Lahore, Multan and Rawalpindi — and a number of princely states.

The partition of India led to the province being divided into East Punjab and West Punjab, belonging to the newly created Union of India and Dominion of Pakistan respectively.

The Punjab, named for the five rivers by which it is watered, comes from the Persian words "Punj" (Panch in Hindi) meaning "five", and "Ab" meaning "water". The rivers are Jhelum, Chenab, Ravi, Beas and Sutlej, which are all tributaries of the Indus.

Geographically, the province was a triangular tract of country of which the Indus River and its tributary the Sutlej formed the two sides up to their confluence, the base of the triangle in the north being the Lower Himalayan Range between those two rivers. Moreover, the province as constituted under British rule also included a large tract outside these boundaries. Along the northern border, Himalayan ranges divided it from Kashmir and Tibet. On the west it was separated from the North-West Frontier Province by the Indus, until it reached the border of Dera Ghazi Khan District, which was divided from Baluchistan by the Sulaiman Range. To the south lay Sindh and Rajputana, while on the east the rivers Jumna and Tons separated it from the United Provinces.[1]

In present-day India, it included the regions of Punjab, Haryana, Chandigarh, Delhi, and Himachal Pradesh (but excluding the former princely states which were later combined into the Patiala and East Punjab States Union)

In present-day Pakistan, it included the regions of Punjab, Islamabad Capital Territory and Khyber Pakhtunkhwa (until 1901) 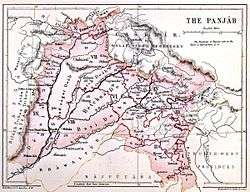 On 21 February 1849, the British defeated the Sikhs at the Battle of Gujrat. Following the victory, the British East India Company (EIC) annexed Punjab on 2 April 1849 and it was made part of the British Raj, at that time administered by the EIC. Lord Dalhousie constituted the Board of Administration by inducting into it the most experienced and seasoned British officers. The members include Sir Henry Lawrence, who had previously worked as British Resident at the Lahore Durbar. Henceforth the Punjab would provide Sikh and Punjabi sepoy regiments to the EIC's armies in India. These soldiers would later help the British to put down the Indian Rebellion of 1857.

Delhi was transferred from the North-Western Provinces (later the United Provinces) to Punjab in 1859. The British colonial government took this action partly to punish the city for the important role that the last Mughal emperor, Bahadur Shah II, and the city as a whole played in the 1857 Rebellion.[2] Sir John Lawrence, then Chief Commissioner, was appointed the first Lieutenant-Governor on 1 January 1859. The territory under the Lieutenant consisted of 29 Districts, grouped under 5 Divisions, and 43 Princely States. Each District was under a Deputy-Commissioner, who reported to the Commissioner of the Division. Each District was subdivided into between three and seven tehsils, each under a tahsildar, assisted by a naib (deputy) tahsildar.[3]

In 1866, the Judicial Commissioner was replaced by a Chief Court. The direct administrative functions of the Government were carried out through the Lieutinent-Governor through the Secretariat, comprising a Chief Secretary, a Secretary and two Under-Secretaries. They were usually members of the Indian Civil Service.[4]

By the late 19th century, however, the Indian nationalist movement took hold in the province. One of the most significant events associated with the movement was the Jallianwala Bagh massacre in 1919. British colonel Reginald Dyer ordered his troops to fire on a group of some 10,000 unarmed Indians who had convened to protest new anti-subversion regulations.[5] Many were killed.

In 1901 the frontier districts beyond the Indus were separated from Punjab and made into a new province: the North-West Frontier Province.

British India's Montagu-Chelmsford Reforms enacted through the Government of India Act 1919 expanded the Punjab Legislative Council and introduced the principle of dyarchy, whereby certain responsibilities such as agriculture, health, education, and local government, were transferred to elected ministers. The first Punjab Legislative Council under the 1919 Act was constituted in 1921, comprising 93 members, seventy per cent to be elected and rest to be nominated.[6] Some of the Indian ministers under the dyarchy scheme were Sir Sheikh Abdul Qadir (Education 1926), Khan Bahadur Chaudhry Sir Shahab-ud-Din (Education 1936) and Lala Hari Kishen Lal.[7][8]

The Government of India Act 1935 introduced provincial autonomy to Punjab replacing the system of dyarchy. It provided for the constitution of Punjab Legislative Assembly of 175 members presided by a Speaker and an executive government responsible to the Assembly. The Unionist Party under Sir Sikandar Hayat Khan formed the government in 1937. Sikandar Hayat Khan was succeeded by Malik Khizar Hayat Tiwana in 1942 who remained the Premier till partition in 1947. Although the term of the Assembly was five years, the Assembly continued for about eight years and its last sitting was held on March 19, 1945.[9]

The Durbar, or assembly of native princes and nobles, convened by Sir John Lawrence at Lahore

The following is a chronological list of Lieutenant-Governors of Punjab Province under British rule.[4] 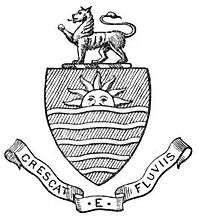 Crescat e Fluviis was the motto used in the Coat of arms for Punjab Province, British India. The language used is Latin.

As per the book History of the Sikhs written by Khushwant Singh, it means Strength from the Rivers.