The Crusader invasion of Egypt (1154–1169) was a series of campaigns undertaken by the Kingdom of Jerusalem to strengthen its position in the Levant by taking advantage of the weakness of Fatimid Egypt.

The war began as part of a succession crisis in the Fatimid Caliphate, which began to crumble under the pressure of Syria and the Crusader states. While one side called for help from Nur ad-Din Zangi, the other called for Crusader assistance. As the war progressed however it became a war of conquest. A number of Syrian campaigns into Egypt were stopped short of total victory by the aggressive campaigning of Amalric I of Jerusalem. Even so, the Crusaders generally speaking did not have things go their way, despite several sackings. A combined Byzantine-Crusader siege of Damietta failed in 1169, the same year that Salah ad-Din, also known as Saladin in the West, took power in Egypt as vizier. In 1171 Saladin became Sultan of Egypt and the Crusaders thereafter turned their attention to the defence of their Kingdom, which, despite being surrounded by Syria and Egypt, held for another 16 years. Later crusades tried to support the Kingdom of Jerusalem by targeting the danger that was Egypt, but to no avail.

Following the capture of Jerusalem by the forces of the First Crusade, the Fatimids of Egypt launched regular raids into Palestine against the Crusaders, while Zengi of Syria launched a series of successful attacks against the Principality of Antioch. The Second Crusade aimed to reverse the gains of Zengi, ironically with an assault on Damascus, Zengi's most powerful rival. The siege failed and forced the Kingdom to turn south for better fortunes.

The Fatimid Caliphate in the 12th century was riddled with internal squabbles. In the 1160s, Power lay not in the hands of the Fatimid Caliph Al-'Āḍid, but in the hands of the Vizier of Egypt, Shawar. The situation in Egypt made it ripe for conquest, either by Crusaders or by the forces of Zengi's successor, Nur ad-Din Zangi. The Crusader capture of Ascalon in 1154 meant that now the Kingdom was at war in two fronts, but Egypt now had an enemy supply base close at hand.

In 1163, Shawar, the ousted Vizier of Egypt called Zengi for support in reinstating him to his former position as the de facto ruler of Egypt. Nur ad-Din agreed to support his cause - an alliance between Syria and Egypt would ensure the demise of the Crusaders. Little did Nur ad-Din realize that, while his plan would succeed, it would not be he who would enjoy such unity.

On May 1164 Shawar became vizier of Egypt. He was however a mere figurehead to Nur ad-Din who had installed his general Shirkuh as ruler of Egypt. Shawar became unsatisfied with this and called upon the enemy of the Sunni Muslims, Amalric I, King of Jerusalem. 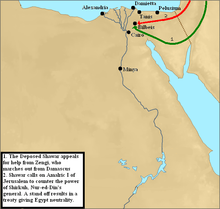 Amalric I had his own designs on Egypt. Therefore, when Shawar invited him into Egypt, he could not turn down such an offer. At Bilbeis, Amalric together with Shawar his Shi'ite ally, besieged Shirkuh. However, Nur ad-Din moved his forces against the Crusader state of Antioch and despite being a Byzantine protectorate (Manuel was in the Balkans) defeated and captured Bohemond III of Antioch and Raymond III of Tripoli at the Battle of Harim. Amalric immediately raced north to rescue his vassal. Even so, Shirkuh evacuated Egypt too so it was a victory for Shawar who retained Egypt. 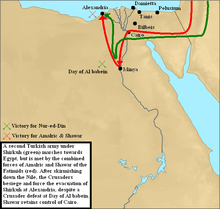 Shawar's rule in Egypt did not last long before Shirkuh returned in 1166 to take back Egypt. Shawar played his Crusader card again and this time Amalric believed an open battle would be able to settle the scores. Unlike Shirkuh, Amalric had naval supremacy in the Mediterranean (though to be fair there were few Syrian ports to the Mediterranean under Nur ad-Din) and took a quick coastal route to Egypt, allowing him to link up with his ally Shawar just as Nur ad-Din's deputy Shirkuh arrived.

At Cairo, the combined Fatimid-Crusader army contemplated the next move while Shirkuh, outside the Pyramids of Giza made an unexpected move for the south. The Fatimid-Crusader army followed to the Battle of al-Babein, where fighting was bloody but inconclusive. Even so, the Crusader-Fatimids pursued the Syrians, whose plan to use Alexandria as a port came to nothing when the Crusader fleet arrived. At Alexandria, the besieged Shirkuh agreed to leave Egypt alone in return for a Crusader withdrawal. Amalric left with a favorable treaty resulting in Egyptian tribute to Jerusalem and a friendly Shawar in control. 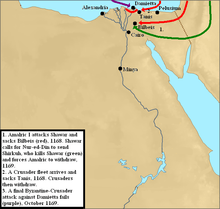 At this point in time the Crusaders should have focused on strengthening their position against Syria, but instead Amalric was tempted by the Hospitaller Knights to attack Egypt and take it. Manuel Komnenos received the idea well. The alliance was still being finalized when Amalric launched a quick attack against Bilbeis in 1168, massacring the population. Shawar appealed to Damascus and Shirkuh returned. When faced with an imminent attack by Amalric, Shawar ordered the burning of his own capital city, Fustat. Shirkuh then fought off Amalric, killed the untrustworthy Shawar, and seized power. Shirkuh himself died two months later and his nephew, Saladin took power as regent.

At Damietta, the Byzantine-Crusader alliance materialized into a siege of the port. The Crusaders attacked late while the Byzantines, after three months abandoned the siege. In 1171, after the death of Caliph Al-Adid, Saladin proclaimed himself Sultan while the Crusaders under Amalric were forced to retreat, having lost many men due to disease and warfare. The Knights Hospitaller became bankrupt after the operation but made a quick recovery financially. The same could not be said for the Kingdom.

The Kingdom of Jerusalem, surrounded by enemies now faced inevitable defeat. Saladin could raise armies potentially numbering 100,000 or more with Syria and Egypt under his control. Nur ad-Din however was still alive until 1174 and Saladin's power in Egypt was seen as a rebellion against his vassalage to Nur ad-Din. After the latter's death Syria and Egypt remained united. A few Crusader victories, notably at Montgisard and a failed Ayyubid siege of Tiberias allowed the Crusaders to stave off defeat until 1187. By 1189 the Crusader realm had been diminished beyond all strength and relied increasingly on politically motivated and inexperienced western reinforcements.

However, after the fall of Jerusalem in 1187, the focus of the Crusaders shifted decisively towards Egypt and less so towards the Levant. This can be seen in the Third Crusade, where Richard the Lionheart recognized the importance of Egypt and twice suggested an invasion of the region. An assault against the Levant could not succeed without the resources and manpower of Egypt, which currently gave the Islamic powers in the region a decisive advantage. The Fourth, Fifth, Seventh, Eighth and Alexandrian Crusades all had Egypt as the intended target.

During the Fifth Crusade (1218-1221) a large force of Crusaders led by the papal legate Pelagio Galvani and John of Brienne took Damietta. The expeditionary force included French, German, Flemish and Austrian crusaders and a Frisian fleet. The army marched on Cairo but was cut off by flooding of the Nile and the campaign ended in disaster with Pelagio forced to surrender with what remained of his army.

During the Seventh Crusade King Louis IX of France invaded Egypt (1249-1250) and after occupying Damietta he marched towards Cairo. However the forces led by Robert I, Count of Artois were defeated at the Battle of Al Mansurah and then King Louis and his main army were defeated at the Battle of Fariskur where his entire army was either killed or captured. The king suffered the humiliation of having to pay an enormous ransom for his freedom.

The temporary victories were followed by defeats, evacuations or negotiations - ultimately amounting to nothing. By 1291, Acre, the last major Crusader fortress in the Holy Land fell to the forces of the Mamluk Sultan of Egypt, and any remaining territories on the mainland were lost over the next decade.