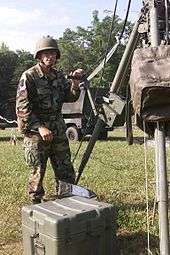 A US Army signaller (25Q) erecting a 30-meter mast antenna 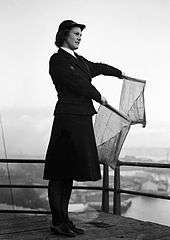 A signaller or signaleer in the armed forces is a specialist soldier, seaman or airman responsible for military communications. Signallers, aka Combat Signallers or signalmen or women, are commonly employed as radio or telephone operators, relaying messages for field commanders at the front line (Army units, Ships or Aircraft), through a chain of command which includes Field headquarters and ultimately governments and non government organisations. Messages are transmitted and received via a communications infrastructure comprising fixed and mobile installations.

In the past, signalling skills have included the use of: Heliograph, Aldis lamp, semaphore flags, "Don R" (Dispatch Riders) and even carrier pigeons.

Modern signallers are responsible for the battlefield voice and data communication and information technology infrastructure, using a variety of media. All types of wire (line), satellite and ionospheric radio communication are employed. These include common radio systems such as HF/VHF radio and UHF/SHF radio (operated in line of sight, for example). Cellular radio and telephone systems such as TETRA are also becoming common.

In addition to day-to-day soldiering, the signaller is required to be competent at a number of skill levels in the following topics:

In an air force, a signaller, an aircrew member, is a person trained to communicate between the aircraft, its base and units in the area of operation, by means of radio or other digital communications.

In the Australian Army, a signaller is often referred derogatorily to as a Chook (Australian Slang for Chicken) by soldiers outside the Signal Corps, because the Morse code used by Signallers has been likened to the chirping of chickens.

In the Canadian Army, a signaller is often referred to as a "Jimmy" in reference to the flag and cap badge feature Mercury (Latin: Mercurius), the winged messenger of the gods, who is referred to by members of the corps as "Jimmy". The origins of this nickname are unclear. According to one explanation, the badge is referred to as "Jimmy" because the image of Mercury was based on the late medieval bronze statue by the Italian sculptor Giambologna, and shortening over time reduced the name Giambologna to "Jimmy". The most widely accepted theory of where the name Jimmy comes from is a Royal Signals boxer, called Jimmy Emblem, who was the British Army Champion in 1924 and represented the Royal Corps of Signals from 1921 to 1924.

Signallers in Canada are responsible for the majority of radio, satellite, telephone, and computer communications within the Canadian military. Trained signallers of the rank of private in Canada are referred to as "Sig" as a replacement for private (i.e. Sig Smith).

In the British Army, signaller may refer to a member of the Royal Corps of Signals specifically to the rank of Signaller (formerly Signalman) or a trained signals specialist in other areas of the army such as the Infantry or Royal Artillery. The rank is equivalent to that of Private.[1]