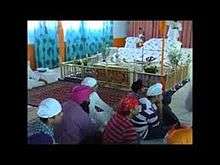 A Sikh temple in Athens

Sikhi in Greece dates back to 1942, when during the Axis occupation of the country, the Sikhs came to the country as a part of Indian volunteer units of the Wehrmacht,and also as soldiers of the British Indian Army.

Even though Sikhs had fought and passed through Greece in both World Wars,in large number as part of the British Indian Army and also in a smaller number as part of the Indian Legion of Adolf Hitler's Wehrmacht. A cemetery of Sikh soldiers of the British Indian Army,still exists in Salonika. It was built in 1920,to bury the bodies of the Sikh soldiers of the First World War.However,The first Sikh community was formed in the 1950s by Sikh immigrants. They worked as farmers or fishermen in the Greek islands. Till the 1970s, the population of Sikhs in Greece was less than 200 people. After the 1970s, Sikh immigrants came to Greece through Turkey. Some of them started their own farm stores and recruited other immigrants to work with them.

In the 1990s the number of immigrants further increased. The Sikh community in Athens formed a small organization for their religious and social needs, which led to the building of Gurudwara Shri Guru Nanak Darbar. They called a granthi, brought some saroops of Guru Granth Sahib and rented a large industrial space that served as the temple. It was known by the Greeks as the "Indian Organization of Tavros, Athens", however the Punjabi characters on the temple board translate to "Sikh Temple Shri Guru Nanak Darbar, Athens".This was done to prevent the possible future attacks on a foreign religious monument.Following Athens' Sikh community, some other Sikh immigrants also made temples in Oinofita, Oropos, Kranidi and Thebes. A large place has been bought by the committee of one of the old Gurdwaras of Oinofita,for the construction of new Gurdwara,outside Schimatari and near to the Military Airport of Tanagra. Even though,a new construction of a Gurdwara needs lot of money,most of needed money has been donated by nearby-living Sikhs as Daswand. The saroop of Guru Granth Sahib was moved from the old building and moved to the new one,even though it is half-completed. It is the only non-rented and bought Gurdwara in Greece. The constructions are supposed to finish almost in May 2017.

The Sikhs are free to wear turbans except when riding motorcycles. They are free to wear the Five Ks except the kirpan in schools and public places. There are still many discrimination against the Sikhs in Greece.

The number of Sikhs living in Greece is estimated to be around 20, 000. Their main centers are Athens, Megara, Chalkida and Psachna.

More than three times, Molotov cocktail bottles have been thrown on the complex of the Athens Gurdwara. A small-scale demonstration was made by the Greek residents of Schimatari-Tanagra,against the building of the new Gurdwara in Schimatari. The police,which was called for help by Sikhs,made the mob to retire but they arrested many builders and charged them for not having certain licenses. The police released them after some hours Also The two gurdwaras in Marathon was attacked with Gunshots with no reported casualty. These are uttered as common by local Sikhs and is believed to be racially motivated crimes and been targeted by right wing and Neo nazi parties.[1]