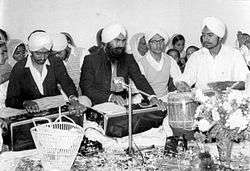 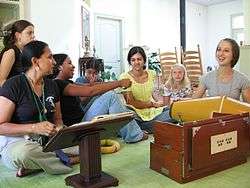 Upper: A kirtan with traditional instruments by Sikh singers in Kenya in the 1960s; Lower: A kirtan singing in progress at a home.

Kirtana (IAST: kīrtana) or Kirtan is a Sanskrit word that means "narrating, reciting, telling, describing" of an idea or story.[1][2] It also refers to a genre of religious performance arts, connoting a musical form of narration or shared recitation, particularly of spiritual or religious ideas.[1]

With roots in the Vedic anukirtana tradition, a Kirtana is a call-and-response style song or chant, set to music, wherein multiple singers recite or describe a legend, or express loving devotion to a deity, or discuss spiritual ideas.[3] It may include dancing or direct expression of bhavas (emotive states) by the singer.[3] Many Kirtana performances are structured to engage the audience where they either repeat the chant,[4] or reply to the call of the singer.[5][6][7]

A person performing kirtana is known as a kirtankara (or kirtankar).[8][9] A Kirtan performance includes an accompaniment of regionally popular musical instruments, such as the harmonium, the veena or ektara (forms of string instruments), the tabla (one-sided drums), the mrdanga or pakhawaj (two-sided drum), flute (forms of woodwind instruments), and karatalas or talas (cymbals).[10] It is a major practice in Vaisnava devotionalism, Sikhism, the Sant traditions and some forms of Buddhism, as well as other religious groups. Kirtana is sometimes accompanied by story-telling and acting. Texts typically cover religious, mythological or social subjects.[11]

Kirtana (Sanskrit: कीर्तन) has Vedic roots and it means "telling, narrating, describing, enumerating, reporting".[1][12] The term is found as Anukirtana (or Anukrti, Anukarana, literally a "re-telling")[13] in the context of Yajna, wherein team recitations of dialogue-style and question-answer riddle hymns were part of the ritual or celebratory dramatic performance.[1] The Sanskrit verses in chapter 13.2 of Shatapatha Brahmana (~800–700 BCE), for example, are written in the form of a riddle play between two actors.[14]

The Vedic sacrifice (yajna) is presented as a kind of drama, with its actors, its dialogues, its portion to be set to music, its interludes, and its climaxes.

The root of Kirtana is kirt (कीर्त्).[16] The root is found in the Samhitas, the Brahmanas and other Vedic literature, as well as the Vedanga and Sutras literature. Kirt, according to Monier-Williams contextually means, "to mention, make mention of, tell, name, call, recite, repeat, relate, declare, communicate, commemorate, celebrate, praise, glorify".[17]

Kirtana, sometimes referred to as sankirtana (literally, "collective performance"),[18] is a call-and-response chanting or musical conversation, a genre of religious performance arts that developed during India's bhakti devotional traditions. However, it is a heterogeneous practice that varies regionally according to Christian Novetzke, and includes varying mixture of different musical instruments, dance, oration, theatre, audience participation and moral narration.[19] In Maharashtra for example, states Novetzke, a Kirtana is a call-and-response style performance, ranging from devotional dancing and singing by a lead singer and audience, to an "intricate scholarly treatise, a social commentary or a philosophical/linguistic exposition", that includes narration, allegory, humor, erudition and entertainment – all an aesthetic part of ranga (beauty, color) of the kirtana.[20]

Kirtan is locally known as Abhang, Samaj Gayan, Haveli Sangeet, Vishnupad, Harikatha.[21] The Vaishnava temples and monasteries of Hinduism in Assam and northeastern, called Satra, have a large worship hall named Kirtan ghar – a name derived from their being used for congregational singing and performance arts.[22] 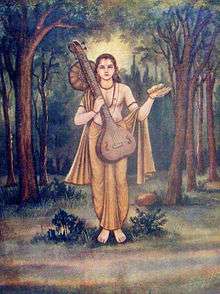 The Vedic sage Narada has been called an early Kirtana singer in the Puranas.[23]

Musical recitation of hymns, mantras and the praise of deities has ancient roots in Hinduism, as evidenced by the Samaveda and other Vedic literature.[24][25]

Kirtana were popularized by the Bhakti movement of medieval era Hinduism, starting with the South Indian Alvars (Vaishnavism) and Nayanars (Shaivism) around the 6th century, which spread in central, northern, western and eastern India particularly after the 12th century, as a social and congregational response to Hindu-Muslim conflicts.[26][27] The foundations of the Kirtana traditions are also found in other Hindu scriptures such as the Bhagavad-gita where Krishna describes multiple paths to spiritual freedom, including karma marga (way of works), jnana marga (way of knowledge) and bhakti marga (way of loving devotion to god). Kirtana relates to the bhakti marga tradition of Hinduism. References to Kirtana as a musical recitation are also found in the Bhagavata Purana, an important Vaishnava text.[28]

Kirtana is often practiced as a kind of theatrical folk song with call-and-response chanting or antiphon. The ancient sage Narada revered as a musical genius, is called a kirtankar (singer of kirtana) in the Padma Purana.[23] The famous story of Prahlada in the Avatara Katha mentions kirtana as one of nine forms of worship, called the nava vidha bhakti[29] along with shravanam (listening), smaranam (remembrance), pada sevanam (service), archanam (offering), vandanam (obeisance), dasyam (servitude), sakhyam (friendship) and atmanivedanam (surrender). The so-called Naradiya Kirtana divides kirtana into five parts:[30] naman (prayers), purvaranga (spiritual lesson based on old epics), chanting, katha or akhyan (exegesis) and a final prayer for universal welfare.

Some Vaishnavism sub-traditions believe in public kirtana performance, with songs and dance. A painting of a 19th-century performance by Chaitanya group in Bengal.

Kirtan as a genre of religious music has been a major part of the Vaishnavism tradition, particularly starting with the Alvars of Sri Vaishnavism sub-tradition between the 7th to 10th century CE.[31] After the 13th-century, two subgenres of kirtana emerged in Vaishnavism, namely the Nama-kirtana wherein the different names or aspects of god (a Vishnu avatar) are extolled, and the Lila- kirtana wherein the deity's life and legends are narrated.[32]

The Varkari saint Namdev (c. 1270–1350) used the kirtana form of singing to praise the glory of god Vithoba, an avatar of Vishnu.[23] Marathi kirtana is typically performed by one or two main performers, called kirtankar, accompanied by harmonium and tabla. It involves singing, acting, dancing, and story-telling.[33][34] It is usually based on poetry of the seven famous saints of Maharashtra; Nivruttinath, Dnyaneshwar, Sopandev, Muktabai, Eknath, Namdev and Tukaram.[35] Jugalbandi Kirtan is performed by two persons, allowing question-answer, dialogue and debate. Performance requires skill in music, dance, comedy, oratory, debate, memory, general knowledge and Sanskrit literature. Training takes place at the Kirtan Kul in Sangli, the Akhil Bharatiya Kirtan Sanstha[36] in Dadar, Mumbai, the Narad Mandir at Sadashiv Peth, Pune and the Kalidas Mahavidyalay in Ramtek, Nagpur as well as at smaller schools in Goa, Beed and Ujjain.

Many Krishna-related kirtana center around his childhood and amorous love stories as a youth.

In the early 16th century CE Chaitanya Mahaprabhu popularized adolescent Krishna based san-kirtana in Bengal, with Hare Krishna mantra and other songs, wherein the love between Radha and Krishna was symbolized as the love between one's soul and God.[37] About the same time, Shankaradeva in Assam inspired Neo-Vaishnavite Bhakti movement that emphasized Advaita Vedanta philosophy within the framework of Bhagavata Purana and Vaishnavism.[38] Shankaradeva helped establish Sattras (Hindu temples and monasteries) with kirtan-ghar (also called Namghar), for singing and dramatic performance of Krishna-related theosophy.[39] Elsewhere, in Vrindavan of Braj region (Mathura), Vallabha launched a Kirtana singing devotional movement around the stories of baby Krishna and his early childhood, in early 16th century.[37]

In Andhra Pradesh,the compositions of Tallapaka Annamacharya, a 14th-century mystic, represent the earliest known music called sankirtana. He wrote in praise of Lord Venkateswara, the deity of Seven Hills in Tirumala, where unbroken worship has been offered for over twelve centuries at the Tirumala Venkateswara Temple.

Annamcharya is believed to be the incarnation of Lord Venkateswara's sword.[40] During his long and prolific career, he reputedly composed and sang 32,000 Sankirtanas and 12 Shatakas (sets of hundred verses). His works were in Telugu and Sanskrit.

A Kirtan and a Bhajan are closely related, with both sharing common aims, subjects, musical themes and being devotional performance arts. A Bhajan is more free form, can be singular melody that is performed by a single singer with or without one and more musical instruments. Kirtan, in contrast, differs in being a more structured team performance, typically with a call and response musical structure, similar to an intimate conversation or gentle sharing of ideas, and it includes two or more musical instruments,[41][7] with roots in the prosody principles of the Vedic era.[42]

Many Kirtan are structured for more audience participation, where the singer calls a spiritual chant, a hymn or a devotional theme such as from Vaishnavism, the audience then responds back by repeating the chant or by chanting back a reply of their shared beliefs.[43][44]

A Kirtan refers to devotional singing in Sikhism.[45][46] It is typically performed at Gurdwaras (Sikh temples), wherein Sikh scriptures and legends are recited in a song, set to a certain raga and accompanied with music. A Shabad Kirtan refers to the musical recitation of the Guru Granth Sahib, the primary scripture in the Sikhism tradition.[47] The Shabad Kirtan is silently listened to by the gathered congregation.[45]

A Kirtan in Sikh history has been the musical analog of Kathas recitation, both preferably performed by ragi jatha, or professional trained performers.[45] A Sikh Kirtan is a religious, aesthetic and social event, usually held in a congregational setting on Sundays or over certain festivals to honor the historical Gurus, but major temples in the Sikh tradition recite Kirtan everyday as a mark of daily bhakti (devotional remembrance) of God's name.[45] The congregational setting is called a Sangat or Satsang, a word that in ancient Indian texts means "like minded individuals, or fellow travelers on a spiritual journey".[48][49]

According to Guy Beck, the music tradition did not develop in early Buddhism possibly because it was considered sensual and inconsistent with its core teachings.[50] Later Buddhism did develop monastic chanting of the canonical literature, particularly in the ritualistic Vajrayana and other Mahayana traditions.[50] Chants, songs and plays about the life of the Buddha by the Buddhists of Bengal were called Buddha-samkirtan.[51]

A ISKCON kirtana performance in Moscow.

Paramhansa Yogananda, a Bengali saint was an early proponent of kirtan in the west, chanting Guru Nanak Dev's Hey Hari Sundara ("Oh God Beautiful") with 3,000 people at Carnegie Hall in 1923.[52] Kirtana became more common with the spread of Gaudiya Vaishnavism by the International Society for Krishna Consciousness's (ISKCON) founder A. C. Bhaktivedanta Swami Prabhupada in the 1960s.[53]

Kirtana singers have appeared in the West, such as Krishna Das, Bhagavan Das, Wah! and Jai Uttal as well as Snatam Kaur, Lokah Music, Deva Premal, Jim Gelcer, Jyoshna, Aindra Das, Gina Sala', and Gaura Vani & As Kindred Spirits. Yoga centers report an increase in attendance at kirtana; according to Pure Music’s Frank Goodman in conversation with Krishna Das in 2006, kirtana has taken on a wider popularity.[54][55]

In the United States case law, the term sankirtana has also been used to refer to evangelical activities of ISKCON.[56] ISKCON had sought the right to perform sankirtana in California airports such as in Los Angeles. The court ruled that while ISKCON has a constitutional rights of protected speech, the Los Angeles airport also has a right to forbid any form of solicitation, out of "a legitimate interest in controlling pedestrian congestion and reducing the risk of fraud and duress attendant to repetitive, in-person solicitation of funds" by all groups including ISKCON.[57]

The male given name Kirtana or Keerthana is used in South India for females as well, particularly in Andhra Pradesh, Karnataka, Kerala and Tamil Nadu.