In geometry a simple polygon /ˈpɒlɪɡɒn/ is a flat shape consisting of straight, non-intersecting line segments or "sides" that are joined pair-wise to form a closed path. If the sides intersect then the polygon is not simple. The qualifier "simple" is frequently omitted, with the above definition then being understood to define a polygon in general.

The definition given above ensures the following properties:

Two edges meeting at a corner are usually required to form an angle that is not straight (180°); otherwise, the collinear line segments will be considered parts of a single side.

Mathematicians typically use "polygon" to refer only to the shape made up by the line segments, not the enclosed region, however some may use "polygon" to refer to a plane figure that is bounded by a closed path, composed of a finite sequence of straight line segments (i.e., by a closed polygonal chain). According to the definition in use, this boundary may or may not form part of the polygon itself.[1]

Simple polygons are also called Jordan polygons, because the Jordan curve theorem can be used to prove that such a polygon divides the plane into two regions, the region inside it and the region outside it. A polygon in the plane is simple if and only if it is topologically equivalent to a circle. Its interior is topologically equivalent to a disk. 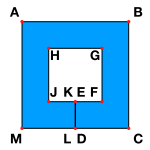 In computational geometry, several important computational tasks involve inputs in the form of a simple polygon; in each of these problems, the distinction between the interior and exterior is crucial in the problem definition.[4]