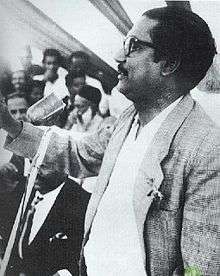 The Six Point Movement was a movement in East Pakistan, spearheaded by Sheikh Mujibur Rahman, which called for greater autonomy for East Pakistan.[1] The movement's main agenda was to realize the six demands put forward by a coalition of Bengali nationalist political parties in 1966, to end the perceived exploitation of East Pakistan by the West Pakistani rulers.

Following the end of British rule in the Indian subcontinent, the new state of Pakistan came into being. The inhabitants of East Pakistan (later Bangladesh) made up the majority of its population, and exports from East Pakistan (such as jute) were a majority of Pakistan's export income. However, East Pakistanis did not feel they had a proportional share of political power and economic benefits within Pakistan. A statistical overview of economic discrimination is shown in this table:

East Pakistan was facing a critical situation after being subjected to continuous discrimination on a regional basis, year after year. As a result, the economists, intelligentsia and the politicians of East Pakistan started to raise questions about this discrimination, giving rise to the historic six-point movement.

The six points are noted as being: