The provisional government was formed in the town of Mujibnagar (formerly Baidyanathtala). Its capital in exile was Calcutta, the capital of the Indian state of West Bengal and the former capital of British India, which hosted thousands of Bangladeshi refugees escaping the 1971 genocide. The provisional government included many defectors from the Pakistani government, foreign service and military; as well as leading intellectuals and cultural figures from East Pakistan. Its chief executive was Tajuddin Ahmad, the first Bangladeshi Prime Minister.

Acting as a wartime administration, the Provisional Government's principal responsibility was coordinating war efforts. With support from India, its military forces waged a successful guerrilla war against Pakistan, securing control of Bangladesh's countryside.[1] A worldwide campaign was undertaken by the Provisional Government to garner support for Bangladesh's independence, genocide victims and refugees. It appointed special envoys and operated representative missions in New Delhi, Washington D.C. and London among many other cities.

The provisional government was established in the town on Baidyanathtala in Meherpur, Kushtia District. Its leaders were administered their oaths at a mango orchard near the site of the Battle of Plassey, in which the British defeated the last independent Nawab of Bengal in 1757.[2] 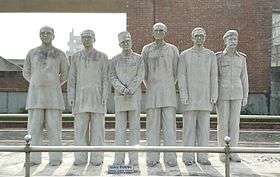 Sculpture of Provisional Government of Bangladesh

The legal basis of the Bangladeshi provisional government was provided by the proclamation of independence issued on 10 April 1971, which served as the interim constitution of Bangladesh until 1972. It declared that Pakistan failed to convene its elected representatives for framing a new constitution on 3 March 1971; and instead launched an "unjust and treacherous war", a reference to the 1971 Bangladesh genocide.[3] As a result, Sheikh Mujibur Rahman, described as the undisputed leader of the 75 million people of East Pakistan, fulfilled aspirations for self-determination by declaring Bangladesh's independence on 26 March 1971.

The proclamation declared Bangladesh as a People's Republic with equality, human dignity and social justice as its fundamental principles.[4]

The interim constitution converted elected Bengali members of Pakistan's national and provincial assemblies into members of the Constituent Assembly of Bangladesh.

The military wing of the provisional government was the Mukti Bahini. The Bangladeshi liberation guerrillas were based in camps on the East Pakistan-India border. In the first months of the war, the Mukti Bahini liberated many districts of Bangladesh; before succumbing to Pakistani onslaughts in the monsoon. The Mukti Bahini secured control of the countryside by November.[1] In December, it joined Indian forces as part of a combined Bangladesh-Indian allied offensive against Pakistan, which resulted in victory.

Many Bengali members of the Civil Service of Pakistan defected to the government of Bangladesh. Dr. Kamal Uddin Siddiqui, Nurul Kader Khan, S. A. Samad, Khondker Asaduzzaman, Dr. Sa'dat Hussain and Dr. Akbar Ali Khan were early leaders of the newly formed Bangladesh Civil Service. The provisional government established an elaborate structure of administrative departments. Yusuf Ali and J. G. Bhowmik served as the chief Relief Commissioners for Bangladeshi refugees. The noted artist Quamrul Hassan served as Director of Art and Design. Calcutta and Agartala were the main centers of the government-in-exile.

The Swadhin Bangla Betar Kendra served as the cultural propaganda wing of the Bangladeshi provisional government.