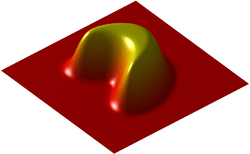 A bump function is a smooth function with compact support. 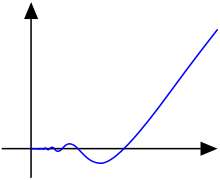 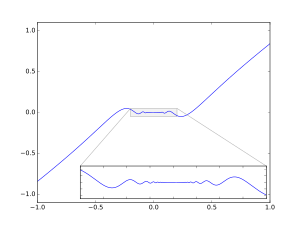 A smooth function that is not analytic.

is continuous, but not differentiable at x = 0, so it is of class C0 but not of class C1.

is differentiable, with derivative

The exponential function is analytic, so, of class C∞. The trigonometric functions are also analytic wherever they are defined.

is smooth, so of class C∞, but it is not analytic at x = ±1, so it is not of class Cω. The function f is an example of a smooth function with compact support.

exist and are continuous, where

is a non-negative integer,

is an integer between 1 and m, each of

is an integer between 1 and n, each of

is an integer between 0 and ℓ, and

These criteria of differentiability can be applied to the transition functions of a differential structure. The resulting space is called a Ck manifold.

If one wishes to start with a coordinate-independent definition of the class Ck, one may start by considering maps between Banach spaces. A map from one Banach space to another is differentiable at a point if there is an affine map which approximates it at that point. The derivative of the map assigns to the point x the linear part of the affine approximation to the map at x. Since the space of linear maps from one Banach space to another is again a Banach space, we may continue this procedure to define higher order derivatives. A map f is of class Ck if it has continuous derivatives up to order k, as before.

Note that Rn is a Banach space for any value of n, so the coordinate-free approach is applicable in this instance. It can be shown that the definition in terms of partial derivatives and the coordinate-free approach are equivalent; that is, a function f is of class Ck by one definition iff it is so by the other definition. [This is not quite right; see the discussion at Fréchet derivative § Finite_dimensions.]

The space of Ck functions

Let D be an open subset of the real line. The set of all Ck functions defined on D and taking real values is a Fréchet vector space with the countable family of seminorms

The set of C∞ functions over D also forms a Fréchet space. One uses the same seminorms as above, except that m is allowed to range over all non-negative integer values.

The above spaces occur naturally in applications where functions having derivatives of certain orders are necessary; however, particularly in the study of partial differential equations, it can sometimes be more fruitful to work instead with the Sobolev spaces.

The terms parametric continuity and geometric continuity (Gn) were introduced by Barsky to show that the smoothness of a curve could be measured by removing restrictions on the speed with which the parameter traces out the curve.[2][3][4]

Parametric continuity is a concept applied to parametric curves describing the smoothness of the parameter's value with distance along the curve.

A curve can be said to have Cn continuity if

is continuous of value throughout the curve.

As an example of a practical application of this concept, a curve describing the motion of an object with a parameter of time, must have C1 continuity for the object to have finite acceleration. For smoother motion, such as that of a camera's path while making a film, higher orders of parametric continuity are required.

Two Bézier curve segments attached that is only C0 continuous.

Two Bézier curve segments attached in such a way that they are C1 continuous.

The various order of parametric continuity can be described as follows:[5] 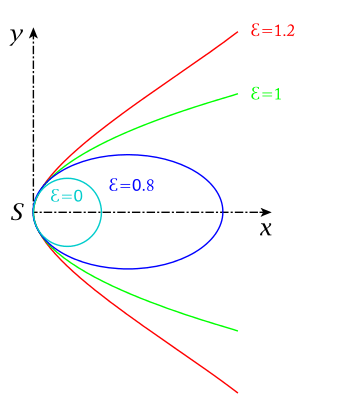 The concept of geometrical or geometric continuity was primarily applied to the conic sections and related shapes by mathematicians such as Leibniz, Kepler, and Poncelet. The concept was an early attempt at describing, through geometry rather than algebra, the concept of continuity as expressed through a parametric function.

The basic idea behind geometric continuity was that the five conic sections were really five different versions of the same shape. An ellipse tends to a circle as the eccentricity approaches zero, or to a parabola as it approaches one; and a hyperbola tends to a parabola as the eccentricity drops toward one; it can also tend to intersecting lines. Thus, there was continuity between the conic sections. These ideas led to other concepts of continuity. For instance, if a circle and a straight line were two expressions of the same shape, perhaps a line could be thought of as a circle of infinite radius. For such to be the case, one would have to make the line closed by allowing the point x = ∞ to be a point on the circle, and for x = +∞ and x = −∞ to be identical. Such ideas were useful in crafting the modern, algebraically defined, idea of the continuity of a function and of ∞.

Smoothness of curves and surfaces

A curve or surface can be described as having Gn continuity, n being the increasing measure of smoothness. Consider the segments either side of a point on a curve:

In general, Gn continuity exists if the curves can be reparameterized to have Cn (parametric) continuity.[6][7] A reparametrization of the curve is geometrically identical to the original; only the parameter is affected.

While it may be obvious that a curve would require G1 continuity to appear smooth, for good aesthetics, such as those aspired to in architecture and sports car design, higher levels of geometric continuity are required. For example, reflections in a car body will not appear smooth unless the body has G2 continuity.

A rounded rectangle (with ninety degree circular arcs at the four corners) has G1 continuity, but does not have G2 continuity. The same is true for a rounded cube, with octants of a sphere at its corners and quarter-cylinders along its edges. If an editable curve with G2 continuity is required, then cubic splines are typically chosen; these curves are frequently used in industrial design.

Smooth functions with given closed support are used in the construction of smooth partitions of unity (see partition of unity and topology glossary); these are essential in the study of smooth manifolds, for example to show that Riemannian metrics can be defined globally starting from their local existence. A simple case is that of a bump function on the real line, that is, a smooth function f that takes the value 0 outside an interval [a,b] and such that

Given a number of overlapping intervals on the line, bump functions can be constructed on each of them, and on semi-infinite intervals (-∞, c] and [d, +∞) to cover the whole line, such that the sum of the functions is always 1.

From what has just been said, partitions of unity don't apply to holomorphic functions; their different behavior relative to existence and analytic continuation is one of the roots of sheaf theory. In contrast, sheaves of smooth functions tend not to carry much topological information.

Smooth maps between smooth manifolds may be defined by means of charts, since the idea of smoothness of function is independent of the particular chart used. If F is a map from an m-manifold M to an n-manifold N, then F is smooth if, for every p ∈ M, there is a chart (U, φ) in M containing p and a chart (V, ψ) in N containing F(p) with F(U) ⊂ V, such that ψ ∘ F ∘ φ−1 is smooth from φ(U) to ψ(V) as a function from Rm to Rn.

Such a map has a first derivative defined on tangent vectors; it gives a fibre-wise linear mapping on the level of tangent bundles.

Smooth functions between subsets of manifolds

There is a corresponding notion of smooth map for arbitrary subsets of manifolds. If f : X → Y is a function whose domain and range are subsets of manifolds X ⊂ M and Y ⊂ N respectively. f is said to be smooth if for all x ∈ X there is an open set U ⊂ M with x ∈ U and a smooth function F : U → N such that F(p) = f(p) for all p ∈ U ∩ X.