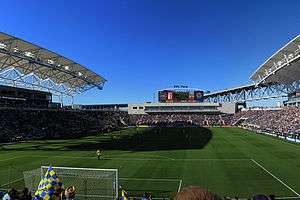 Talen Energy Stadium, home of the Philadelphia Union, is a soccer-specific stadium.

Soccer-specific stadium is a term used mainly in the United States and Canada,[1] to refer to a sports stadium either purpose-built or fundamentally redesigned for soccer and whose primary function is to host soccer matches, as opposed to a multipurpose stadium which is for a variety of sports. A soccer-specific stadium may host other sporting events (such as lacrosse, American football and rugby) and concerts, but the design and purpose of a soccer-specific stadium is primarily for soccer. Some facilities (for example Toyota Park, Toyota Stadium and Mapfre Stadium) have a permanent stage at one end of the stadium used for staging concerts.

A soccer-specific stadium typically has amenities, dimensions and scale suitable for soccer in North America, including a scoreboard, video screen, luxury suites and possibly a roof. The field dimensions are within the range found optimal by FIFA: 110–120 yards (100–110 m) long by 70–80 yards (64–73 m) wide.[2] These soccer field dimensions are wider than the regulation American football field width of 53 1⁄3 yards (48.8 m), or the 65-yard (59 m) width of a Canadian football field. The playing surface should also consist of grass as opposed to artificial turf, since the latter makes players more susceptible to injuries.[3] However, Portland's Providence Park has artificial turf.

Lastly, the seating capacity is generally small enough to provide an intimate setting, between 18,000 and 30,000 for a Major League Soccer franchise,[4] or smaller for minor league soccer teams. This is in comparison to the much larger American football stadiums that mostly range between 60,000 – 80,000 in which the original North American Soccer League teams played at and most MLS teams participated in during the league's inception.[5]

In the 1980s and 1990s, Division I professional soccer leagues in the United States, such as the North American Soccer League and Major League Soccer, primarily used American football fields, many of which were oversized in terms of seating capacity, undersized in terms of width of the soccer pitch, and often used artificial turf (none of which, at the time, were approved for international soccer under FIFA rules). Although many of the baseball parks had smaller capacities, natural grass and a wider field in which to place the pitch, these parks were generally in-use during the summer season, when North American–based soccer leagues, such as Major League Soccer, also hold their seasons.

Soccer-specific stadiums first came into use in the 1990s, after the multi-purpose stadium era.[6][7]

In 2011 Bob Lenarduzzi confirmed that the Vancouver Whitecaps are now committed to BC Place, and that plans for the waterfront stadium have been put on hold.[9]

The term "football-specific stadium" is sometimes used in countries where the sport is known as football rather than soccer, although the term is not common in countries where football is the dominant sport and thus football-specific stadiums are quite common. The term tends to have a slightly different meaning in these countries, usually referring to a stadium without an athletics track surrounding the pitch.