Not to be confused with History of free and open-source software.

In 1997, Eric S. Raymond wrote The Cathedral and the Bazaar. In this book, Raymond makes the distinction between two kinds of software development. The first is the conventional closed-source development. This kind of development method is, according to Raymond, like the building of a cathedral; central planning, tight organization and one process from start to finish. The second is the progressive open-source development, which is more like "a great babbling bazaar of differing agendas and approaches out of which a coherent and stable system could seemingly emerge only by a succession of miracles." The latter analogy points to the discussion involved in an open-source development process.

Differences between the two styles of development, according to Bar & Fogel, are in general the handling (and creation) of bug reports and feature requests, and the constraints under which the programmers are working. In closed-source software development, the programmers are often spending a lot of time dealing with and creating bug reports, as well as handling feature requests. This time is spent on creating and prioritizing further development plans. This leads to part of the development team spending a lot of time on these issues, and not on the actual development. Also, in closed-source projects, the development teams must often work under management-related constraints (such as deadlines, budgets, etc.) that interfere with technical issues of the software. In open-source software development, these issues are solved by integrating the users of the software in the development process, or even letting these users build the system themselves.

Not to be confused with Open-source model. 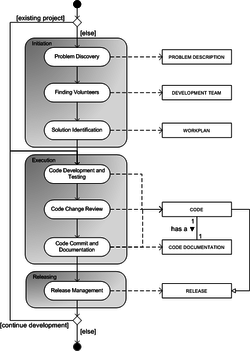 There are several ways in which work on an open-source project can start:

Eric Raymond observed in his essay The Cathedral and the Bazaar that announcing the intent for a project is usually inferior to releasing a working project to the public.

It's a common mistake to start a project when contributing to an existing similar project would be more effective (NIH syndrome). To start a successful project it is very important to investigate what's already there. The process starts with a choice between the adopting of an existing project, or the starting of a new project. If a new project is started, the process goes to the Initiation phase. If an existing project is adopted, the process goes directly to the Execution phase.

Several types of open-source projects exist. First, there is the garden variety of software programs and libraries, which consist of standalone pieces of code. Some might even be dependent on other open-source projects. These projects serve a specified purpose and fill a definite need. Examples of this type of project include the Linux kernel, the Firefox web browser and the Apache OpenOffice office suite of tools.

Other open-source projects, like the BSD derivatives, maintain the source code of an entire operating system, the kernel and all of its core components, in one revision control system; developing the entire system together as a single team. These operating system development projects closely integrate their tools, more so than in the other distribution-based systems.

Finally, there is the book or standalone document project. These items usually do not ship as part of an open-source software package. The Linux Documentation Project hosts many such projects that document various aspects of the GNU/Linux operating system. There are many other examples of this type of open-source project.

It is hard to run an open-source project following a more traditional software development method like the waterfall model, because in these traditional methods it is not allowed to go back to a previous phase. In open-source software development, requirements are rarely gathered before the start of the project; instead they are based on early releases of the software product, as Robbins describes. Besides requirements, often volunteer staff is attracted to help develop the software product based on the early releases of the software. This networking effect is essential according to Abrahamsson et al.: “if the introduced prototype gathers enough attention, it will gradually start to attract more and more developers”. However, Abrahamsson et al. also point out that the community is very harsh, much like the business world of closed-source software: “if you find the customers you survive, but without customers you die”.

Developers and users of an open-source project are not all necessarily working on the project in proximity. They require some electronic means of communications. E-mail is one of the most common forms of communication among open-source developers and users. Often, electronic mailing lists are used to make sure e-mail messages are delivered to all interested parties at once. This ensures that at least one of the members can reply to it. In order to communicate in real time, many projects use an instant messaging method such as IRC. Web forums have recently become a common way for users to get help with problems they encounter when using an open-source product. Wikis have become common as a communication medium for developers and users.

In OSS development the participants, who are mostly volunteers, are distributed amongst different geographic regions so there is need for tools to aid participants to collaborate in the development of source code.

During early 2000s', Concurrent Versions System (CVS) was a prominent example of a source code collaboration tool being used in OSS projects. CVS helps manage the files and codes of a project when several people are working on the project at the same time. CVS allows several people to work on the same file at the same time. This is done by moving the file into the users’ directories and then merging the files when the users are done. CVS also enables one to easily retrieve a previous version of a file. During mid 2000s', The Subversion revision control system (SVN) was created to replace CVS. It is quickly gaining ground as an OSS project version control system.

Many open-source projects are now using distributed revision control systems, which scale better than centralized repositories such as SVN and CVS. Popular examples are git, used by the Linux kernel, and Mercurial, used by the Python programming language.

Most large-scale projects require a bug tracking system to keep track of the status of various issues in the development of the project. Some bug trackers include:

A memory leak tool or memory debugger is a programming tool for finding memory leaks and buffer overflows. A memory leak is a particular kind of unnecessary memory consumption by a computer program, where the program fails to release memory that is no longer needed. Examples of memory leak detection tools used by Mozilla are the XPCOM Memory Leak tools. Validation tools are used to check if pieces of code conform to the specified syntax. An example of a validation tool is Splint.

Refactoring, rewrites and other revamps

Open-source developers sometimes feel that their code requires a revamp. This can be either because the code was written or maintained without proper refactoring (as is often the case if the code was inherited from a previous developer), or because a proposed enhancement or extension of it cannot be cleanly implemented with the existing codebase. Another reason to revamp the code is that the code does not meet the developer's standards.