Louis was born in the town of Marousi, which is now a suburb to the north of Athens, into a poor family. Louis's father sold mineral water in Athens, at the time lacking a central water supply, and his son helped him by transporting it.

After the decision to revive the Olympic Games in 1894, preparations were made to organise the first modern Olympics in Athens. One of the races would be the marathon, an event which had never been held before. It had been suggested by Frenchman Michel Bréal, who was inspired by the legend of the messenger Phidippides, who had run from the town of Marathon to Athens to announce the Athenian victory in the Battle of Marathon.

The Greeks were very enthusiastic about this new event and decided to stage qualifying races for would-be Greek participants. These were organised by an army colonel, Papadiamantopoulos, who had been Louis' commanding officer during his military service (1893–1895). The first qualifying race—the first ever marathon race—was held on 22 March, and was won by Charilaos Vasilakos in 3 hours, 18 minutes. Louis participated in the second qualifying race, two weeks later. Papadiamantopoulos, who knew Louis' running talents, had convinced him to try out. Louis crossed the line in fifth place, behind winner Dimitrios Deligiannis.

The Olympic marathon was run on 10 April (or 29 March by the Julian Calendar then in use in Greece). The Greek public had been very enthusiastic about the Games, but was disappointed in the fact that no track and field event had yet been won by a Greek competitor. The victory in the discus throw, a classical Greek event, by the American Robert Garrett had been particularly painful. Because of its close connection with Greek history, the public desperately yearned for the marathon to be won by one of their countrymen.

In Marathon, Colonel Papadiamantopoulos gave the starting signal for the small field, consisting of thirteen athletes from Greece and four from other nations. The early leader of the race, which led over dusty dirt roads along which throngs of Greeks had gathered to watch, was the Frenchman Albin Lermusiaux, who had earlier placed third in the 1500 metres. In the town of Pikermi, Louis made a stop at a local inn to drink a glass of wine. (Louis' grandson, also Spiridon Louis, said that this is incorrect; that his grandfather's girlfriend gave him half an orange and shortly afterwards he "got a glass of cognac from his future father in law."[2]) After asking for the advantage of the other runners, he confidently declared he would overtake them all before the end.

After 32 km, Lermusiaux was exhausted and abandoned the race. The lead was taken over by Edwin Flack, an Australian who won the 800 and 1500 m races. Louis slowly closed in on Flack. The Australian, not used to running long distances, collapsed a few kilometers onwards, giving Louis the lead.

In the stadium, the atmosphere was tense, especially after a cyclist brought the news that the Australian was in the lead. But another messenger was sent out by the police as soon as Louis moved into the lead, and as the word spread that it was a Greek that led the race, the cry "Hellene, Hellene!" was taken up by thousands of rapturous spectators. When Louis finally arrived in a stadium erupting with joy, two Greek princes – Crown Prince Constantine and Prince George – rushed to meet him and accompanied him on his final lap for a finishing time of 2:58:50. Louis's victory set off wild celebrations, as described in the official report of the Games:

Here the Olympic Victor was received with full honour; the King rose from his seat and congratulated him most warmly on his success. Some of the King’s aides-de-camp, and several members of the Committee went so far as to kiss and embrace the victor, who finally was carried in triumph to the retiring room under the vaulted entrance. The scene witnessed then inside the Stadion cannot be easily described, and even foreigners were carried away by the general enthusiasm.

Reportedly, the king offered Louis any gift he would care to ask of him, and all Louis could think of was a donkey-drawn carriage to help him in his water-carrying business.

Adding to the celebrations, two more Greek runners entered the stadium to finish in second and third place. Third place finisher Spiridon Belokas was later found to have covered part of the course by carriage and was disqualified; his place was taken by the Hungarian Gyula Kellner.

After his victory, Louis received gifts from many countrymen, ranging from jewelry to a lifelong free shave at the barber shop. It is unknown if Louis took all these gifts, although he did take back home the carriage he had asked of the king. He retreated to his hometown, never again competing in running. He lived a quiet life, working as a farmer, and later as a local police officer.

Forty years after his marathon gold, four years before his death, Louis recalled the moments after his victory: "That hour was something unimaginable and it still appears to me in my memory like a dream … Twigs and flowers were raining down on me. Everybody was calling out my name and throwing their hats in the air …"[3] 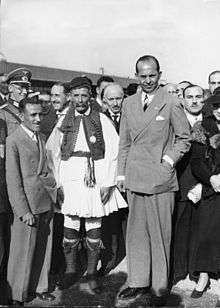 Spyridon Louis with Crown Prince (later king) Paul of Greece in Berlin, during the 1936 Summer Olympics.

In 1926, Louis was arrested on charges of falsifying military documents and was imprisoned. After spending more than a year in jail, he was found not guilty, and was acquitted. The affair predictably caused a press uproar.[1]

His last public appearance came in 1936, when he was invited to be a guest of honour by the organizers of the 1936 Summer Olympics, held in Berlin. After bearing the standard of the Greek team during the opening ceremonies, he was received by Adolf Hitler and offered him an olive branch from Olympia, the birthplace of the Olympic Games, as a symbol of peace.

Several months before the Italian invasion of Greece, Louis died. Many sports clubs in Greece and abroad still carry his name, as does the main stadium at the Athens Olympic Sports Complex, where the 2004 Summer Olympics were held, as well as the road passing outside (Spyros Louis Avenue).

The Jayne Mansfield movie It Happened in Athens is a heavily-fictionalized take on Louis and the marathon. The expression in Greek: "yinomai Louis" (γίνομαι Λούης), translated as "to becοme Louis," means "tο disappear by running fast."[4]

In 2012, a new pair of Vibram FiveFingers called the Spyridon LS was launched in honor of Louis.[5]

The silver cup given to Louis at the first modern Olympic Games staged in Athens in 1896, was sold for £541,250 ($860,000) in London on 18 April 2012, breaking the auction record for Olympic memorabilia. Breal's Silver Cup stands just six inches tall and was offered for sale at Christie's by the grandson of the victor.

Christie's called the auction "heated" and involved six bidders. The auctioneer later confirmed the buyer as the Stavros Niarchos Foundation, which plans to build a major cultural center in Athens, where the Olympic cup will go on display from 2015. Meanwhile, it is displayed at the Athens' Acropolis Museum. The item was sold on the day Britain marked the 100 days' countdown to the 2012 London Olympics.[6]