Eusebius of Vercelli (c. March 2, 283 – August 1, 371) was a bishop and saint in Italy. Along with Athanasius, he affirmed the divinity of Jesus against Arianism.

Eusebius was born in Sardinia, in 283. After his father's martyrdom, he was taken to Rome by his mother. Having received the Ministry of Lectorate, he was a lector in Rome before he became the first bishop in Vercelli (in northern Italy), probably sometime in the early- to mid-340s. He was the first bishop to live in common with the clergy, devoting his best energies to form them in piety and zeal.[2] According to a letter of Ambrose to the congregation in Vercelli two decades after Eusebius' death, the local leaders recognized his piety and thus elected him rather than local candidates (Epistola lxiii, Ad Vercellenses). At some point he led his clergy to form a monastic community modelled on that of the Eastern cenobites (Ambrose, Ep. lxxxi and Serm. lxxxix). For this reason the Canons Regular of St. Augustine honor him along with Augustine as their founder (Proprium Canon. Reg., 16 December).

In 354, Pope Liberius asked Eusebius to join Bishop Lucifer of Cagliari in carrying a request to the Emperor Constantius II at Milan, pleading for the emperor to convoke a council to end the dissentions over the status of Athanasius of Alexandria and the matter of Arianism. The synod was held in Milan in 355. Eusebius attended part of the council, but refused to condemn Athanasius and so was exiled, first to Scythopolis in Syria, under the watchful eye of the Arian bishop Patrophilus, whom Eusebius calls his jailer, then to Cappadocia, and lastly to the Thebaid, in Upper Egypt. Several letters surrounding the council written to or by Eusebius still survive, as do two letters written by him during his exile.

During the reign of Emperor Constantius II, Eusebius was dragged through the streets half naked and persecuted in many ways, but never gave up the Catholic faith.[2]

After the death of Constantius and on the accession of Julian, the exiled bishops were free to return to their sees, in 362. Eusebius passed through Alexandria and there attended Athanasius' synod of 362 which confirmed the divinity of the Holy Ghost and the orthodox doctrine concerning the Incarnation. The synod also agreed both to deal mildly with the repentant bishops who had signed Arianizing creeds under pressure and to impose severe penalties upon the leaders of several of the Arianizing factions.

While still on his way home, Eusebius took the synod's decisions to Antioch and hoped to reconcile the schism there. The church was divided between adherents of Eustathius of Antioch, who had been deposed and exiled by the Arians in 331, and those of the Meletians. Since Meletius' election in 361 was brought about chiefly by the Arians, the Eustathians would not recognize him, although he solemnly proclaimed his orthodox faith after his episcopal consecration. The Alexandrian synod had desired that Eusebius should reconcile the Eustathians with Bishop Meletius, by purging his election of whatever might have been irregular in it, but Eusebius found that Lucifer of Cagliari had also passed that way, and had unilaterally consecrated Paulinus, the leader of the Eustathians, as Bishop of Antioch.

Unable to reconcile the factions, he continued towards home, visiting other churches along the way in the interest of promulgating and enforcing the orthodox faith. Once back in Vercelli in 363, he continued to be a leader with Hilary of Poitiers in defeating Arianism in the Western Church, and was one of the chief opponents of the Arian bishop Auxentius of Milan. He died in 370 or 371. Later legends of his martyrdom have no historical basis. The Roman Catholic Church celebrates his feast on August 2.[3] His former feast day of December 16 roughly coincided with his elevation as bishop. His current feast day roughly coincides with the anniversary of his death. Vercelli Cathedral is dedicated to him. 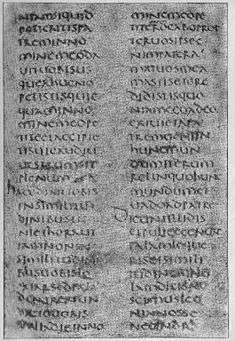 A part of the Codex Vercellensis, believed to have been written by Eusebius in the year 370.

The Catholic Encyclopedia gives the following: three short letters of Eusebius are printed in Migne, Pat.Lat., XII, 947-54 and X, 713-14. Jerome (Of Famous Men, c. lvi, and Epstle li, n. 2) ascribes to him a Latin translation of a commentary on the Psalms, written originally in Greek by Eusebius of Caesarea; but this work has been lost. In the cathedral at Vercelli is preserved the Codex Vercellensis, the earliest manuscript of the old Latin Gospels ("Codex a"), which was believed to have been written by Eusebius, thought now scholars tend to doubt it.[4] It was published by Irico (Milan 1748) and Bianchini (Rome, 1749), and is reprinted in Migne, Patrologia Latina XII, 9-948; a new edition was brought out by Belsheim (Christiania, 1894). Krüger (Lucifer, Bischof von Calaris, Leipzig, 1886, 118-30) ascribes to Eusebius a baptismal oration by Caspari (Quellen sur Geschichte des Taufsymbols, Christiania, 1869, II, 132-40). The confession of faith "Des. Trinitate confessio", P.L., XII, 959-968, sometimes ascribed to Eusebius, is spurious.

A modern edition of his writings is found in the 9th volume of Corpus Christianorum - Series Latina.[5]