The National Plan of Integrated Airport Systems for 2011–2015 categorized it as a primary commercial service airport since it has over 10,000 passenger boardings (enplanements) per year. In 2014 it experienced double-digit growth and handled more than one million passengers and set a passenger record.[4]

Because it is less busy than Tampa, PIE is frequently used by pilots of private planes and executive jets flying to the Tampa Bay Area.

The airport uses "Tampa Bay The Easy Way" as an advertising slogan and Fly2PIE in reference to its three-letter IATA and FAA codes.

The airport is on the west shoreline of Tampa Bay, six miles (10 km) north of St. Petersburg, Florida (the "birthplace of commercial air transportation"). Barely a decade after the pioneer flight of the Wright brothers at Kitty Hawk in 1903, the first tickets for airline travel were sold by the St. Petersburg-Tampa Airboat Line of Tony Jannus to fare-paying passengers. Using a Benoist XIV amphibious aircraft, the inaugural flight took place from a location near the downtown St. Petersburg Pier.[5] Mayor Abram C. Pheil of St. Petersburg and Mae Peabody of Dubuque, Iowa, were the first passengers, flying across the bay to Tampa and, according to a United Press account, reportedly reaching the maximum speed of 75 miles per hour during the flight. Other reports indicate that they reached an altitude of 50 feet (15 m).

This marked the beginning of commercial air transportation anywhere in the world and is commemorated by a replica of the Benoist aircraft and a plaque at the airport terminal baggage claim area. Another replica is displayed at the St. Petersburg Museum of History adjacent to the Pier. Since 1991, the terminal holds the archives of the Florida Aviation Historical Society.[6]

Construction of the airport at its present site started in March 1941. After the attack on Pearl Harbor, the airport was acquired by the United States Army Air Forces, which used it as a military flight training base assigned to Third Air Force.

The 304th Fighter Squadron, a combat training unit of the 337th Fighter Group based P-40 Warhawks and, later, P-51 Mustangs at Pinellas Army Airfield (as it was then known) for the duration of World War II. Antisubmarine patrols against German U-boats in the Gulf of Mexico were also flown from the airfield.

To commemorate the airport's vital role during that conflict, a plaque was dedicated at the airport terminal in 1994 by the P-51 Fighter Pilots Association and Brigadier General James H. Howard, who was the only European Theater fighter pilot to be awarded the Medal of Honor in World War II and later served as the last wartime base commander of Pinellas Army Airfield. A permanent exhibit honoring General Howard is located in the terminal. 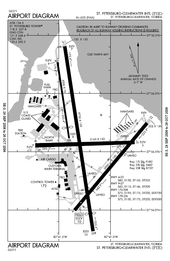 After World War II, the airport property was returned to Pinellas County by the U.S. government to operate as a commercial airport. It was originally called Pinellas International Airport and given the IATA designation, PIE, which it still uses, because PIA was already taken by Peoria International Airport.[7] It was later changed to St. Petersburg–Clearwater International Airport because, according to airport manager "Bobo" Hayes, tourists didn't know where Pinellas county was.[6]

In the 1950s some airlines provided service to both PIE and TPA, such as Delta Air Lines, Eastern Air Lines, National Airlines and Northwest Airlines. The April 1957 Official Airline Guide (OAG) shows 17 airline departures: ten Eastern, six National and one Mackey. Four of those flights were nonstop beyond Florida, including an Eastern Air Lines DC-4 to Chicago and a Lockheed 1049G to Pittsburgh.

With the advent of the Jet age, the airport's runway was extended northward into Tampa Bay and the first commercial jet service to PIE was operated by Northwest Airlines. The greatly increased seating capacities of the Boeing 707 and Douglas DC-8, compared to the propeller-driven DC-6 and DC-7, prompted the Civil Aeronautics Board to approve the consolidation of commercial airline service for the Tampa Bay area at TPA in the early 1960s.

Eastern was the last remaining scheduled air carrier at PIE when it terminated service in 1964. Airline service returned to PIE in the 1970s when Air Florida flew Lockheed Electras out of PIE; in 1982, Northeastern International started DC-8 nonstops to Islip, New York, and in 1983 People Express started nonstops to Newark with Boeing 737s and Boeing 727s. In 1986, Florida Express was operating British Aircraft Corporation BAC One-Eleven twin jets nonstop to its nearby hub in Orlando.[8] In 1987, American Airlines started nonstops to its Raleigh-Durham hub, but by October 1989 PIE again had no scheduled airline service.

American Trans Air, and Southeast Airlines added air service in the mid 1990s but both ceased operations at PIE in 2004, ATA downsizing due to bankruptcy and Southeast going defunct.

In September 2006, Allegiant Air announced significant scheduled service from St. Petersburg–Clearwater to destinations in Iowa, Illinois, Indiana, Michigan, Missouri, New York, Ohio, Pennsylvania, South Carolina, Tennessee, and Virginia. Since then, Allegiant has grown its destination count to and from PIE to 21 airports across the eastern U.S. In February, the Lansing, Michigan service shifted to Grand Rapids, Michigan, with four weekly flights.

Also, the airport recently completed a US$22 million renovation, including, among other things, expanding the gate sizes, new plumbing, and building loading bridges, as the previous system required all passengers to walk across the tarmac to/from the gate. These improvements played a significant roll in the airport luring passenger flights to and from the airport.[9]

In January 2015 Silver Airways announced it was beginning service to PIE, but in March the company had cancelled its plans.[10] 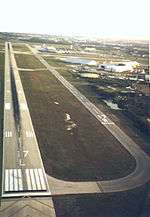 Along with scheduled passenger and charter airlines and military flight operations, United Parcel Service / UPS Airlines, other air cargo, general/corporate aviation are also major activities, with UPS conducting extensive Boeing 757. The entire tract of the airport is designated as a Foreign Trade Zone (FTZ) and a large Airport Industrial Park developed in the 1980s is a major center of commerce. The airport and its tenants employ over 3,000 people and have an economic benefit of more than $400 million yearly to the Tampa Bay area.

The airport has a 24-hour airport rescue and fire-fighting (ARFF) department (Index C), along with operations, facilities, engineering, security, and administrative personnel.

St. Petersburg–Clearwater International Airport has one terminal and thirteen gates: 1–12 and 14.

Flight destinations as of Spring 2016

On June 6, 1982, a Douglas C-47A (N95C), of Fromhagen Aviation, was written off after the starboard engine failed during the takeoff for a training flight. All five people aboard survived.[15]

On September 30, 2015, the pilot of a Piper PA-30, registered to Jet Aircraft Management, crashed and died while practicing takeoffs and landings.[16][17]

On June 1, 2016, Allegiant Air flight 871 made an emergency landing at the airport, its scheduled destination. The plane departed from Moline, Illinois. No injuries were reported, and the airline declined to comment on the mechanical failure.[18]

St. Pete–Clearwater has had a rich variety of airlines, both mainline,charter, and international come and go over the decades with one of the first scheduled airlines, the St. Petersburg–Tampa Airboat Line flying passengers between St. Pete and Tampa occurring in the area around the airport.

Historically many of the international flights have been seasonal flights to Canada for snowbirds who have places of residence in Florida during the winter and tourists. Most airlines that have served PIE have focused on vacation packages for vacationers coming to the Tampa bay area.