In geometry, a star polyhedron is a polyhedron which has some repetitive quality of nonconvexity giving it a star-like visual quality.

There are two general kinds of star polyhedron:

These images show each form with a single face colored yellow to show the visible portion of that face.

There are many uniform star polyhedra including two infinite series, of prisms and of antiprisms, and their duals.

Beyond the forms above, there are unlimited classes of self-intersecting (star) polyhedra.

Two important classes are the stellations of convex polyhedra and their duals, the facettings of the dual polyhedra.

For example, the complete stellation of the icosahedron (illustrated) can be interpreted as a self-intersecting polyhedron composed of 12 identical faces, each a (9/4) wound polygon. Below is an illustration of this polyhedron with one face drawn in yellow. 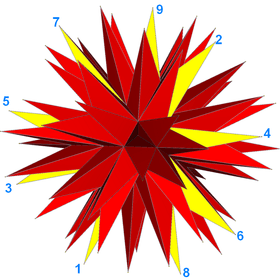 A similarly self-intersecting polytopes in any number of dimensions is called a star polytope.

For example, the great grand stellated 120-cell, projected orthogonally into 3-space, looks like this: 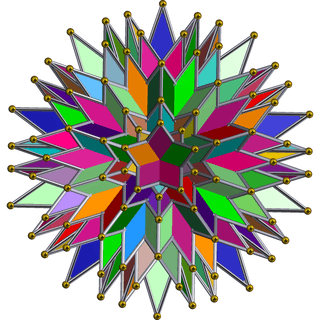 There are no regular star polytopes in dimensions higher than 4. 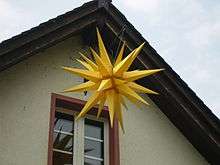 A Moravian star hung outside a church

A polyhedron which does not cross inside itself, and all of the interior can be seen from one point, is an example of a star domain. Many star polyhedra are of this type (although star polyhedra and star domains have no formal mathematical relationship).

Such star polyhedra appear in various types of architecture, usually religious in nature. For example they are seen on many baroque churches as symbols of the Pope who built the church, on Hungarian churches and on other religious buildings. These stars can also be used as decorations. Moravian stars are used for both purposes and can be constructed in various forms.