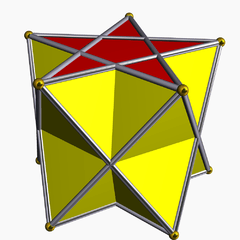 A pentagrammic antiprism is made of two regular pentagrams and 10 equilateral triangles.

Because they are isogonal (vertex-transitive), their vertex arrangement uniquely corresponds to a symmetry group.

If p/q is an integer, i.e. if q = 1, the prism or antiprism is convex. (The fraction is always assumed to be stated in lowest terms.)

This article is issued from Wikipedia - version of the 4/30/2015. The text is available under the Creative Commons Attribution/Share Alike but additional terms may apply for the media files.