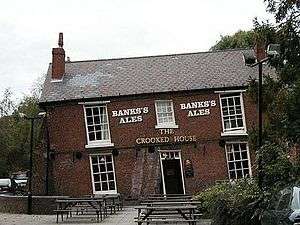 A road destroyed by subsidence and shear, near Castleton, Derbyshire.

Subsidence is the motion of a surface (usually, the Earth's surface) as it shifts downward relative to a datum such as sea-level. The opposite of subsidence is uplift, which results in an increase in elevation. Ground subsidence is of concern to geologists, geotechnical engineers and surveyors.

Subsidence frequently causes major problems in karst terrains, where dissolution of limestone by fluid flow in the subsurface causes the creation of voids (i.e. caves). If the roof of these voids becomes too weak, it can collapse and the overlying rock and earth will fall into the space, causing subsidence at the surface. This type of subsidence can result in sinkholes which can be many hundreds of meters deep.

Several types of sub-surface mining, and specifically methods which intentionally cause the extracted void to collapse (such as pillar extraction, longwall mining and any metalliferous mining method which uses "caving" such as "block caving" or "sub-level caving") will result in surface subsidence. Mining-induced subsidence is relatively predictable in its magnitude, manifestation and extent, except where a sudden pillar or near-surface underground tunnel collapse occurs (usually very old workings[1]). Mining-induced subsidence is nearly always very localized to the surface above the mined area, plus a margin around the outside.[2] The vertical magnitude of the subsidence itself typically does not cause problems, except in the case of drainage (including natural drainage)–rather, it is the associated surface compressive and tensile strains, curvature, tilts and horizontal displacement that are the cause of the worst damage to the natural environment, buildings and infrastructure.[3]

Where mining activity is planned, mining-induced subsidence can be successfully managed if there is co-operation from all of the stakeholders. This is accomplished through a combination of careful mine planning, the taking of preventive measures, and the carrying out of repairs post-mining. 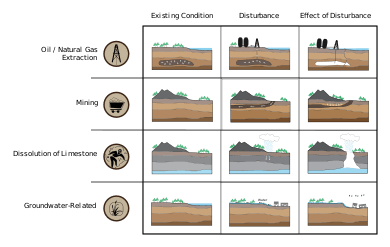 A graphic illustrating the different types of ground subsidence.

If natural gas is extracted from a natural gas field the initial pressure (up to 60 MPa (600 bar)) in the field will drop over the years. The gas pressure also supports the soil layers above the field. If the pressure drops, the soil pressure increases and this leads to subsidence at the ground level.

Since exploitation of the Slochteren (Netherlands) gas field started in the late 1960s the ground level over a 250 km² area has dropped by a current maximum of 30 cm.[4]

The Geospatial Information Authority of Japan reported immediate subsidence caused by the 2011 Tōhoku earthquake.[5] In Northern Japan, subsidence of 0.50 m (1.64 ft) was observed on the coast of the Pacific Ocean in Miyako, Tōhoku, while Rikuzentakata, Iwate measured 0.84 m (2.75 ft). In the south at Sōma, Fukushima, 0.29 m (0.95 ft) was observed. The maximum amount of subsidence was 1.2 m (3.93 ft), coupled with horizontal diastrophism of up to 5.3 m (17.3 ft) on the Oshika Peninsula in Miyagi Prefecture.[6]

The habitation of lowlands, such as coastal or delta plains, requires drainage. The resulting aeration of the soil leads to the oxidation of its organic components, such as peat, and this decomposition process may cause significant land subsidence. This applies especially when ground water levels are periodically adapted to subsidence, in order to maintain desired unsaturated zone depths, exposing more and more peat to oxygen. In addition to this, drained soils consolidate as a result of increased effective stress.[7][8] In this way, land subsidence has the potential of becoming self-perpetuating, having rates up to 5 cm/yr. Water management used to be tuned primarily to factors such as crop optimisation but, to varying extents, avoiding subsidence has come to be taken into account as well.

When differential stresses exist in the Earth, these can be accommodated either by geological faulting in the brittle crust, or by ductile flow in the hotter and more fluid mantle. Where faults occur, absolute subsidence may occur in the hanging wall of normal faults. In reverse, or thrust, faults, relative subsidence may be measured in the footwall.

The crust floats buoyantly in the asthenosphere, with a ratio of mass below the "surface" in proportion to its own density and the density of the asthenosphere. If mass is added to a local area of the crust (e.g. through deposition), the crust subsides to compensate and maintain isostatic balance.

The opposite effect to Isostatic subsidence is known as isostatic rebound - the action of the crust returning (sometimes over periods of thousands of years) to a state of isostacy, such as after the melting of large Ice sheets or the drying-up of large lakes after the last ice age. Lake Bonneville is a famous example of isostatic rebound. Due to the weight of the water once held in the lake, the Earth's crust subsided nearly 200 feet (61 m) to maintain equilibrium, when the lake dried up, the crust rebounded. Today at modern Lake Bonneville, the center of the former lake is about 200 feet (61 m) higher than the former lake edges.

Many soils contain significant proportions of clay which because of the very small particle size are affected by changes in soil moisture content. Seasonal drying of the soil results in a reduction in soil volume and a lowering of the soil surface. If building foundations are above the level to which the seasonal drying reaches they will move and this can result in damage to the building in the form of tapering cracks. Trees and other vegetation can have a significant local effect on seasonal drying of soils. Over a number of years a cumulative drying occurs as the tree grows, this can lead to the opposite of subsidence, known as heave or swelling of the soil, when the tree declines or is felled. As the cumulative moisture deficit is reversed, over a period which can last as many as 25 years, the surface level around the tree will rise and expand laterally. This is often more damaging to buildings unless the foundations have been strengthened or designed to cope with the effect.