For other uses, see Crop (disambiguation). 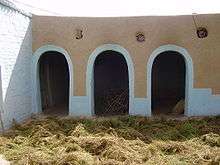 Crops drying in a home in Punjab, India.

A crop is any cultivated plant, fungus, or alga that is harvested for food, clothing, livestock,fodder, biofuel, medicine, or other uses. In contrast, animals that are raised by humans are called livestock, except those that are kept as pets. Microbes, such as bacteria or viruses, are referred to as cultures. Microbes are not typically grown for food, but are rather used to alter food. For example, bacteria are used to ferment milk to produce yogurt.