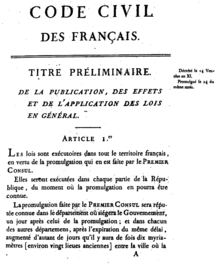 First page of the 1804 original edition of the Napoleonic code.

The concept of codification dates back to ancient Babylon. The earliest surviving civil code is the Code of Ur-Nammu, in . 2100–2050 BC. The most famous ancient civil code, however, is the Corpus Juris Civilis, a codification of Roman law produced between 529-534 AD by the Byzantine emperor Justinian I, which forms the basis of civil law legal systems.

Other civil codes used since ancient times include various texts used in religious laws, such as the Law of Manu in Hindu law, the Mishnah in Jewish Halakha law, the Canons of the Apostles in Christian Canon law, and the Qur'an and Sunnah in Islamic Sharia law to some extent.

European codes and influences on other continents 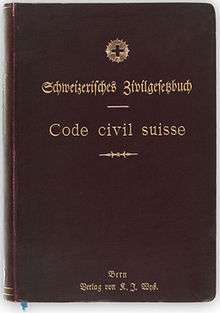 The first edition of the Swiss Civil Code (around 1907). In 1911, it became the first civil code to include commercial law (Swiss Code of Obligations).[2]

The idea of codification re-emerged during the Age of Enlightenment, when it was believed that all spheres of life could be dealt with in a conclusive system based on human rationality, following from the experience of the early codifications of Roman Law during the Roman Empire.

The first attempts at modern codification were made in the second half of the 18th century in Germany, when the states of Austria, Prussia, Bavaria and Saxony began to codify their laws. The first statute that used this denomination was the Codex Maximilianeus bavaricus civilis of 1756 in Bavaria, still using the Latin language. It was followed in 1792 by a legal compilation that included civil, penal, and constitutional law, the Allgemeines Landrecht für die Preussischen Staaten (General National Law for the Prussian States) promulgated by King Frederick II the Great. In Austria, the first step towards fully-fledged codification were the yet incomplete Codex Theresianus (compiled between 1753 and 1766), the Josephinian Code (1787) and the complete West Galician Code (enacted as a test in Galicia in 1797). The final Austrian Civil Code (called Allgemeines bürgerliches Gesetzbuch, ABGB) was only completed in 1811 after the dissolution of the Holy Roman Empire of German Nation under the influence of the Napoleonic Wars. One of the very first countries to follow up through legal transplants in codification was Serbia.

Meanwhile, the French Napoleonic code (Code Civil) was enacted in 1804 after only a few years of preparation, but it was a child of the French Revolution, which is strongly reflected by its content. The French code was the most influential one because it was introduced in many countries standing under French occupation during the Napoleonic Wars. In particular, countries such as Italy, the Benelux countries, Spain, Portugal (with the Civil Code of 1867, later replaced by the Civil Code of 1966, which is strongly influenced by the German BGB), the Latin American countries, the province of Quebec in Canada, the state of Louisiana in the United States, and all other former French colonies which base their civil law systems to a strong extent on the Napoleonic Code.

The late 19th century and the beginning 20th century saw the emergence of the School of Pandectism, whose work peaked in the German Civil Code (BGB), which was enacted in 1900 in the course of Germany's national unification project, and in the Swiss Civil Code (Zivilgesetzbuch) of 1907. Those two codes had been most advanced in their systematic structure and classification from fundamental and general principles to specific areas of law (e.g. contract law, labour law, inheritance law). While the French Civil Code was structured in a "casuistic" approach attempting to regulate every possible case, the German BGB and the later Swiss ZGB applied a more abstract and systematic approach. Therefore, the BGB had a great deal of influence on later codification projects in countries as diverse as Japan, Greece, Turkey, Portugal (1966 Civil Code) and Macau (1999 Civil Code).

In Europe, apart from the common law countries of the United Kingdom and Ireland, only Scandinavia remained untouched by the codification movement. The particular tradition of the civil code originally enacted in a country is often thought to have a lasting influence on the methodology employed in legal interpretation. Scholars of comparative law and economists promoting the legal origins theory of (financial) development usually subdivide the countries of the civil law tradition as belonging either to the French, Scandinavian or German group (the latter including Germany, Austria, Switzerland, Liechtenstein, Japan, Taiwan and South Korea).

Civil codes in the Americas

The first civil code promulgated in Canada was that of New Brunswick of 1804, inspired by the 1800 project of the French civil code, known as the Projet de l'an VIII (project of the 8th year); nevertheless, in 1808 a Digeste de la loi civile was sanctioned.

In the United States, codification appears to be widespread at a first glance, but U.S. legal codes are actually collections of common law rules and a variety of ad hoc statutes; that is, they do not aspire to complete logical coherence. For example, the California Civil Code largely codifies common law doctrine and is very different in form and content from all other civil codes.

In 1825, Haiti promulgated a Code Civil, that was simply a copy of the Napoleonic one; while Louisiana abolished its Digeste, replacing it with the Code Civil de l'État de la Lousianne the same year.

Later on, in 1830, the civil code of Bolivia, a summarized copy of the French one, was promulgated by Andrés de Santa Cruz. The latest, with some changes, was adopted by Costa Rica in 1841.

The Dominican Republic, in 1845, put into force the original Napoleonic code, in French language (a translation in Spanish was published in 1884).

In 1852, Peru promulgated its own civil code (based on a project of 1847), which was not a simple copy or imitation of the French one, but presented a more original text based on the Castillan law (of Roman origin) that was previously in force on the Peruvian territory.

Chile promulgated its civil code in 1855, an original work in confront with the French code both for the scheme and for the contents (similar to the Castillan law in force in that territory) that was written by Andrés Bello (begun in 1833). This code was integrally adopted by Ecuador in 1858; El Salvador in 1859; Venezuela in 1862 (only during that year); Nicaragua in 1867; Honduras in 1880 (until 1899, and again since 1906); Colombia in 1887; and Panama (after its separation from Colombia in 1903).

Uruguay promulgated its code in 1868, and Argentina in 1869 (work by Dalmacio Vélez Sársfield). Paraguay adopted its code in 1987, and in 1877 Guatemala adopted the Peruvian code of 1852.

Nicaragua in 1904 replaced its civil code of 1867 by adopting the Argentine code. In 1916 Brazil enacted its civil code (project of Clovis Bevilacqua, after rejecting the project by Teixeira de Freitas that was translated by the Argentines to prepare their project), that entered into effect in 1917 (in 2002, the Brazilian Civil Code was replaced by a new text). Brazilian Civil Code of 1916 was considered, by many, as the last code of the 19th century despite being adopted in the 20th century. The reason behind that is that the Brazilian Code of 1916 was the last of the important codes from the era of codifications in the world that had strong liberal influences, and all other codes enacted thereafter were deeply influenced by the social ideals that emerged after World War I and the Soviet Socialist Revolution.

Panama in 1916 decided to adopt the Argentine code, replacing its code of 1903.

Cuba had the old Civil Code of Spain until the year 1987 when the National Assembly of People's Power approved the Cuban Civil Code, Law 59.

Also the civil code of Spain of 1889 would be enforced in its colony, the Philippines, and this would remain in effect even after the end of Spanish rule until the Philippines enacted its own Civil Code in 1950 after almost fifty years of U.S. rule.

Many legal systems of other countries in Asia are within the civil law tradition and have enacted a civil code, mostly derived from the German civil code; that is the case of Japan, Korea, Thailand (the Civil and Commercial Code), Taiwan and Indonesia (which is influenced by the Dutch Civil Code (Burgerlijke Wetboek)).

Contents of a civil code

A typical civil code deals with the fields of law known to the common lawyer as law of contracts, torts, property law, family law and the law of inheritance. Commercial law, corporate law and civil procedure are usually codified separately.

The older civil codes such as the French, Egyptian, Austrian and Spanish ones are structured under the Institutional System of the Roman jurist Gaius and generally have three large parts:

The newer codes such as the ones of Germany, Switzerland, Greece, Portugal, Romania and Catalonia are structured according to the Pandectist System:

The civil code of the state of Louisiana, following the institutions system, is divided into five parts:

Pandectism also had an influence on the earlier codes and their interpretation. For example, Austrian civil law is typically taught according to the Pandect System (which was devised by German scholars in the time between the enactment of the Austrian and the German Codes), even though this is not consistent with the structure of the Code.

The following is the list of national or regional civil codes by alphabetic order of names of countries or regions: