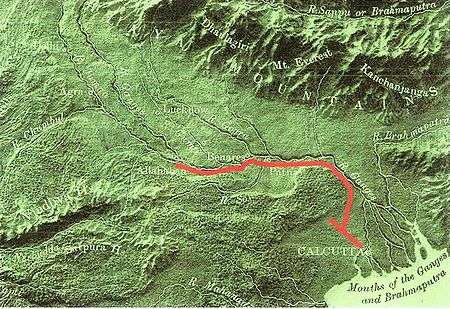 The East Indian Railway Company, later known as the East Indian Railway (EIR), introduced railways to eastern and northern India, while the Companies such as the Great Indian Peninsular Railway, South Indian Railway, Central India Railway and the North-Western Railway operated in other parts of India. The company was established 1 June 1845 in London by a deed of settlement with a capital of £4,000,000, largely raised in London.[1]

The first Board of Directors formed in 1845 comprised thirteen members and Rowland Macdonald Stephenson became the first Managing Director of the company.

Rowland Macdonald Stephenson (later Sir Rowland, but familiarly known as Macdonald Stephenson[2]) and three assistants travelled from England in 1845 and "with diligence and discretion" surveyed, statistically studied and costed the potential traffic for a railway route from Calcutta (the then commercial capital of India) to Delhi via Mirzapur.[3] They assessed that the maximum cost of a twin-track line would not exceed £15000 per mile if the land was available without charge. The East Indian Railway Company was then formed and raised money in London. A contract was signed between the East India Company and the East Indian Railway Company on 17 August 1849, entitling the latter to construct and operate an "experimental" line between Calcutta and Rajmahal, 161 km (100 miles) long at an estimated cost of £1,000,000, which would be later extended to Delhi via Mirzapur.[4]

On 7 May 1850, the East Indian Railway Company's Managing Director Macdonald Stephenson, George Turnbull, the company's Chief Engineer, and the engineer Slater made an initial survey from Howrah (across the River Hooghly from Calcutta) to Burdwan on the route to the Raniganj coalfields. By June, there was an impasse, in that the government still did not allow Turnbull and his engineers to mark a route on the ground! Specifications for works were however advertised on 1 July and tenders received on 31 July for six contracts. Bamboo towers 80 feet (24 m) tall were then built above the palm trees at Serampore and Balli Khal to set out the line.

On 29 January 1851 the East Indian Railway Company took possession of its first land. Turnbull and other British engineers began detailed surveys of the line. They chose the critical crossing point on the 5,000-foot-wide (1,500 m) Son River (the largest Ganges tributary) on 17 February. The best route to Raniganj was determined in May and June. The plans for Howrah station were submitted on 16 June.

Tenders for 11 contracts arrived on 31 October 1851. In December Turnbull continued his survey: he took levels and defined the line from Burdwan to Rajmahal.[2]

All permanent way, rolling stocks were transported from England in sailing ships to Calcutta via the Cape of Good Hope (the Suez Canal did not then exist). In April 1854, it was estimated that over 100,000 tons of rails, 27,000 tons of chairs, and some 8000 tons of keys, fish-plates, pins, nuts and bolts were needed.[5]

Although immense quantities of sal tree wood for sleepers were delivered from Nepal, yet more were needed.Thus fir sleepers from the Baltic were creosoted in England and shipped to India.[2]

The initial plans were for the many bridges over the Ganges tributaries to be built of bricks: hundreds of millions were needed. Brick-making skills were very limited and often the available clay was found to be unsuitable. Transport by river of suitable clay was difficult. Brick availability became a major problem, such that the decision was made to use vast quantities of ironwork – imported from England as India had no iron works at that time. Much ironwork was stolen during the Indian Rebellion of 1857.[7]

In 1853, The first railway line between Bombay to Thane (32 km stretch) was opened. It had 14 coaches and was driven by 3 engines The 541 miles (871 kilometres) of line from Howrah to Benares were opened to:

The most significant bridge was the girder bridge over the Son River (then known in English as the Soane River) which at the time was understood to be the second longest in the world. Other significant bridges were the girder bridges over the Kiul and Hullohur rivers and the masonry bridge over the Adjai. The Monghyr tunnel was a challenge. In late 1859, a horrific cholera epidemic in the Rajmahal district killed some 4000 labourers and many of the British engineers.[12]

On 5 February 1863, a special train from Howrah took George Turnbull, the Viceroy Lord Elgin, Lt Governor Sir Cecil Beadon and others over two days to Benares inspecting the line on the way.[13] They stopped the first night at Jamalpur near Monghyr. They alighted at the Son bridge and inspected it.[14] In Benares there was a durbar on 7 February to celebrate the building of the railway and particularly the bridging of the Son, the largest tributary of the Ganges.[2]

The Chief Engineer responsible for all this construction from 1851 to 1862 was George Turnbull who was acclaimed in the Indian Official Gazette of 7 February 1863 paragraph 5 as the "First railway engineer of India".

Some historians like Irfan Habib argue that because the contracts signed between East India Company and EIR in 1849 guaranteed 5 percent return on all capital invested, initially there was no inducement for economy or for employing Indians instead of high-paid Europeans. EIR was stated in 1867 to have spent as much as Rs 3 lakh on each miles of railway, the construction described by a former Finance Member in India as 'the most extrvagant works ever undertaken.[15]

The line from Kanpur to Allahabad was opened in 1859. In 1860, the Kanpur-Etawah section was opened to traffic and between 1862 and 1866 all gaps between Howrah and Delhi were filled and the connection to Agra was built. The bridges over the Yamuna at Allahabad and at Delhi were completed in 1865 and 1866 respectively. In June 1867 the Allahabad-Jabalpur branch was completed and a connection made at Jabalpur with the Great Indian Peninsula Railway, thus completing the rail connections between Calcutta and Delhi and Calcutta and Bombay.[10] On 31 December 1879, the British Indian Government purchased the East Indian Railway Company, but leased it back to the company to work under a contract terminable in 1919.

On 1 January 1925 the British Indian Government took over the management of the East Indian Railway[16] and divided it into six divisions: Howrah, Asansol, Danapur, Allahabad, Lucknow and Moradabad.

On 14 April 1952, Jawaharlal Nehru, the Prime Minister of India inaugurated two new zones of the first six zones of the Indian Railways. One of them, the Northern Railways had the three "up-stream" divisions of East Indian Railway: Allahabad, Lucknow and Moradabad, while the other, the Eastern Railways had the three "down-stream" divisions: Howrah, Asansol and Danapur and the complete Bengal Nagpur Railway.[17]