This is a Chinese name; the family name is Sun.

Sun Jian (c. 155–191),[2] courtesy name Wentai, was a military general and warlord who lived in the late Eastern Han dynasty. He allied himself with Yuan Shu in 190 when warlords from eastern China formed a coalition to oust Dong Zhuo, a tyrannical warlord who held the puppet Emperor Xian in his power. Although he controlled neither many troops nor much land, Sun Jian's personal bravery and resourcefulness were feared by Dong Zhuo, who placed him among Yuan Shao, Yuan Shu and Liu Biao as the most influential men at that time. After the coalition disbanded in the next year, China fell into massive civil war. In 191, Sun Jian was killed in battle during an offensive campaign against Liu Biao.

Sun Jian was also the father of Sun Quan, one of the central figures of the Three Kingdoms era who eventually established the Eastern Wu state and declared himself its first emperor in 229, whereupon Sun Jian was given the posthumous title "Emperor Wulie" (武烈皇帝).

Born in the Fuchun Prefecture of the Wu Commandery (吳郡富春, present day Fuyang, Zhejiang), Sun Jian was said to be a descendant of the renowned military strategist Sun Tzu, author of The Art of War. No more immediate records survive, indicating his family probably played a very small part during the Han dynasty.[3] Even his father's name is unrecorded, although a folk tradition gives it as Sun Zhong (孫鍾).[4]

Sun Jian was a civil officer in his prefecture during his youth. When he was sixteen, Sun Jian travelled with his father to Qiantang (錢唐, present day Hangzhou, Zhejiang), where they came upon a band of pirates dividing up their spoils on land. Sun Jian jumped on shore with a sabre in hand and pointed in different directions as if commanding a detachment of soldiers to surround the pirates. Seeing this, the pirates were deceived and fled. Sun Jian pursued, and only after taking the head of every pirate did he return (or just the leaders according to some accounts). His name henceforth spread.

In 184, the Yellow Turban Rebellion led by Zhang Jiao broke out across the country. Sun Jian joined the general Zhu Jun to quell the rebellion in Yuzhou (豫州, present day southern Henan and northern Anhui) area. The soldiers fought hard, forcing the rebels to retreat to Wancheng (宛城, present day Nanyang, Henan). Sun Jian placed himself in the forefront and climbed onto the city walls alone. The rest then swarmed in and defeated the rebels.

Around this time, Bian Zhang and Han Sui colluded with the Qiang tribes and rebelled in Liang Province (涼州, present day western Gansu). After Dong Zhuo failed to put down the rebellion, the central government sent in his place the Minister of Works Zhang Wen, who invited Sun Jian along as an advisor. When Zhang Wen summoned Dong Zhuo to the encampment at Chang'an, Dong Zhuo procrastinated and took a long time to arrive. When he did, he showed little respect for Zhang Wen. Sun Jian then advised Zhang Wen to execute Dong Zhuo, but Zhang Wen declined as Dong Zhuo held high reputation in the west.

Despite scoring a major victory against the rebels at Meiyang, Zhang Wen could not press their advantage and the rebellion was still not quelled. Zhang Wen and the rest returned to the capital Luoyang in disgrace and thus no honor was accorded. Meanwhile, another local-scale rebellion broke out near Changsha and the rebels besieged the city. Sun Jian was then made administrator of Changsha. Within a month upon taking up office, Sun Jian had quelled the rebellion. Meanwhile, rebellions also broke out in the neighboring commanderies of Lingling (零陵, present day Yongzhou, Hunan) and Guiyang (桂陽). Both were put down by Sun Jian, who was then enfeoffed as Marquis of Wucheng (烏程侯).

In 189, Emperor Ling died, leaving his young son in the care of regents Empress Dowager He and General-in-Chief He Jin. He Jin then summoned Dong Zhuo to lead troops into the capital to assist in a plot to eliminate the powerful eunuch faction. Before Dong Zhuo arrived, however, He Jin was assassinated by the eunuchs and Luoyang fell into chaos following a clash between supporters of both sides. Dong Zhuo then seized military control of the capital and deposed the young emperor for the puppet Emperor Xian. However, his tyrannical ways incurred the wrath of many and in the following year, warlords from eastern China formed a coalition against him.

Sun Jian also raised an army with ten-thousands of troops and joined Yuan Shu, one of the leaders of the coalition at Luyang (魯陽, present day Lushan County, Henan). Yuan Shu made Sun Jian the General Who Quells Rebels (破虜將軍) and governor of Yuzhou. Sun Jian then began training and preparing his troops at Luyang. A force sent by Dong Zhuo was so impressed with the strict discipline of Sun Jian's troops that they gave up the plan to attack Luyang. When Sun Jian moved out to Liangdong (梁東, east of present-day Linru County, Henan), he was outnumbered by Dong Zhuo's forces. With several dozen horsemen, Sun Jian broke out of the encirclement. He took off the red felt scarf he had always been wearing and handed it to his trusted aide Zu Mao (祖茂), whom Dong Zhuo's soldiers then chased after while Sun Jian escaped. Unable to shake off his pursuers, Zu Mao then dismounted, hanged the scarf onto a half-burnt pillar, and hid himself in the tall grasses nearby. The enemies surrounded the pillar and approached cautiously till they realized they had been fooled, whereupon they retreated.

After regrouping his troops, Sun Jian pressed forward against the capital and engaged in battle against Dong Zhuo's forces at Yangren (陽人, northwest of Linru County). He scored a brilliant victory and killed the enemy Chief Controller (都督) Hua Xiong in battle. (In Romance of the Three Kingdoms, Hua Xiong was said to be killed by Guan Yu.) At this time, someone told Yuan Shu that if Sun Jian defeated Dong Zhuo and took over the capital, he would not be controllable anymore. The doubtful Yuan Shu then ceased the food supply to Sun Jian. Sun Jian rode the hundred odd li from Yangren to Luyang in the night to see Yuan Shu, whereupon he said to the latter, "I put myself to danger in battle, first to remove the rebel (Dong Zhuo) for the country and second to avenge the deaths of your family (Yuan Shu's family members in Luoyang had all been killed by Dong Zhuo). I have no personal grudge against Dong Zhuo. Yet you could believe slanderous talks and suspect me!" The words put Yuan Shu to shame and he immediately ordered the food supply to be delivered.

Fearing Sun Jian, Dong Zhuo then sent his general Li Jue as an emissary to seek peace and propose a marriage to cement the alliance. However, Sun Jian rejected the proposals with harsh words and carried on his campaign towards Luoyang. In late 190, his force was merely ninety li away from the capital when Dong Zhuo retreated west to Chang'an after burning Luoyang to the ground. Entering Luoyang, Sun Jian ordered his men to reseal the tombs of former emperors that were excavated by Dong Zhuo, after which he returned to Luyang. It was said in the Book of Wu (吳書) by Wei Zhao that Sun Jian found one of the emperor's jade seals in a well south of Luoyang and kept it. Later, when Yuan Shu declared himself emperor, he held Sun Jian's wife Lady Wu hostage in exchange for the seal.

In 191, Yuan Shu sent Sun Jian to attack Liu Biao in Jing Province (荆州; present day Hubei and Hunan). The defense force led by Liu Biao's subject Huang Zu was defeated by Sun Jian, who pursued the enemy across the Han River to Xiangyang. During a solo ride on the Xian Hill (峴山), Sun Jian was ambushed by Huang Zu's troops, who shot him to death with arrows. The Record of Heroes (英雄記) by Wang Can, however, claims that Sun Jian died in 193 and that he was crushed to death by boulders instead of killed by arrows while pursuing the enemy commander Lü Gong. His nephew Sun Ben collected his troops and returned to Yuan Shu, who then made Sun Ben the Inspector of Yu Province.

Sun Jian was buried in the Gao Mausoleum in Qu'e (曲阿; in present-day Danyang, Jiangsu). He was survived by five sons: Sun Ce, Sun Quan, Sun Yi, Sun Kuang and Sun Lang and one daughter, commonly named Sun Shangxiang though her real name was not recorded in official history. His legacy was first inherited by the first-born Sun Ce, who died early at twenty-six. Sun Ce was then succeeded by his younger brother Sun Quan, who eventually established Eastern Wu as a sovereign state in 222 and declared himself its first emperor in 229. Sun Jian was then given the posthumous title of Emperor Wulie (武烈皇帝).

In the 14th-century historical novel Romance of the Three Kingdoms, some events of Sun Jian were romanticised by Luo Guanzhong.

Sun Jian first appears the novel in Chapter 5, in which he joined the coalition against Dong Zhuo. In the battle against Hua Xiong, the commander of the enemy army, Sun Jian took off his own red scarf and handed it to Zu Mao when Sun Jian's army was raided. Having distracted Hua Xiong and let Sun Jian escape, Zu Mao was chased after by Hua Xiong, so he hid himself in woods after hanging the scarf on a half-burnt pillar. When Hua Xiong found himself to be fooled, he killed Zu Mao who dashed out of his hideout to challenge him. Hua Xiong then launched an attack on Sun's army, which lasted for a whole night. Sun Jian could not resist Hua Xiong, so he called for assistance from the coalition. Hua Xiong was unrivalled until he met the unfamed Guan Yu.

After Dong Zhuo retreated to Chang'an, Sun Jian was the first to enter Luoyang and ordered to put off the fires set by Dong Zhuo. Seeing the destruction of the imperial capital and Han dynasty, Sun Jian sighed and shed a tear. However, when his men found a jade seal, which was proven to be the imperial seal, Sun Jian grew ambitious and requested to retreat to his base. The news was leaked, to Sun Jian's miscalculation. When Yuan Shao, the leader of the coalition, interrogated Sun Jian, the latter swore by saying, "Should I have hid the treasure, I shall die miserably under arrows!" Under the protection by his guards, Sun Jian left Luoyang immediately.

On the way to his base, Sun Jian passed through Jing Province, where the governor, Liu Biao, was asked by Yuan Shao to attack Sun Jian. Sun Jian badly lost the battle and barely escaped. When he later launched a revenge attack upon Jing Provence, in accordance with the order of his senior, Yuan Shu, he was lured under a cliff where he was shot dead by arrows from the above. Sun's camp reclaimed Sun Jian's corpse using a captive, Huang Zu, who was Liu Biao's brother-in-law. When Dong Zhuo heard of Sun's death in Chang'an, he said, "One of my greatest enemies is removed!" and consequently usurped more power in the imperial court. 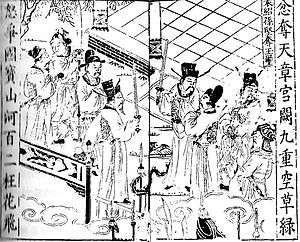 A Qing dynasty illustration of Sun Jian and Yuan Shao fighting over the seal.

Sun Jian is featured as a playable character in Koei's Dynasty Warriors and Warriors Orochi video game series. He also appears in Koei's Romance of the Three Kingdoms series.

In the SD Gundam series BB Senshi Sangokuden, which is based on Romance of the Three Kingdoms, Sun Jian is characterised as the Gundam Sonken Zephyranthes. His design invokes a white tiger motif.