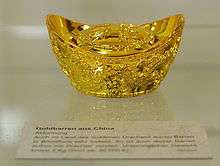 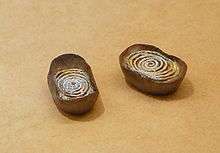 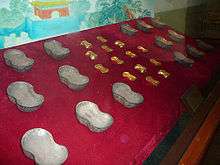 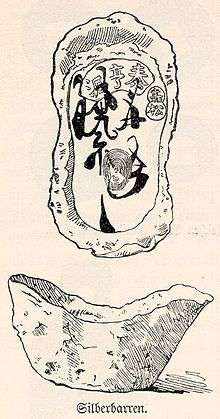 Drawing of a boat-shaped silver sycee

A sycee[n 1] (/ˈsaɪsiː/[2] or /sʌɪˈsiː/,[1] from Cantonese 細絲, sai-sì, lit. "fine silk")[2][3] or yuanbao (Chinese: t 元寶, s 元宝, p yuánbǎo) was a type of silver or gold ingot currency used in imperial China from its founding under the Qin dynasty until the fall of the Qing in the 20th century. Sycee were not made by a central bank or mint but by individual silversmiths for local exchange; consequently, the shape and amount of extra detail on each ingot were highly variable. Square and oval shapes were common, but boat, flower, tortoise and others are known. Their value—like the value of the various silver coins and little pieces of silver in circulation at the end of the Qing dynasty—was determined by experienced moneyhandlers (shroffs), who estimated the appropriate discount based on the purity of the silver and evaluated the weight in taels and the progressive decimal subdivisions of the tael (mace, candareen, and cash).

In present-day China, gold sycees remain a symbol of wealth and prosperity and are commonly depicted during the Lunar New Year festivities. Paper imitations of gold- or silver-colored paper are burned along with hell money as a part of Chinese ancestral veneration for Tomb Sweeping Day and the Ghost Festival.

The name "sycee" is an irregular romanization of the Cantonese pronunciation of the characters for "fine silk".[2][3] This is variously explained as deriving from the ability to draw pure gold or silver out into fine threads[1] or from the silky sheen of quality silver.[4]

The name "yuanbao" is the pinyin romanization of the Mandarin pronunciation of the characters for "inaugural treasures". Under China's Tang dynasty, coins were inscribed Kaiyuan tongbao (開元通寶, "Circulating Treasure of the Beginning of an Era"),[5][6] later abbreviated to yuanbao. The name was also applied to other non-coin forms of currency. Yuanbao was spelt yamboo[7][8] and yambu[9][10] in the 19th-century English-language literature on Xinjiang and the trade between Xinjiang and British India.

Sycees were first used as a medium for exchange as early as the Qin Dynasty (3rd century BC). During the Tang Dynasty, a standard bi-metallic system of silver and copper coinage was codified with 10 silver coins equal to 1,000 copper cash coins.[11]

Paper money and bonds started to be used in China in the 9th century. However, due to monetary problems such as enormous local variations in monetary supply and exchange rates, rapid changes in the relative value of silver and copper, coin fraud, inflation, and political uncertainty with changing regimes, until the time of the Republic payment by weight of silver was the standard practice, and merchants carried their own scales with them. Most of the so-called "opium scales" seen in museums were actually for weighing payments in silver. The tael was still the basis of the silver currency and sycees remained in use until the end of the Qing Dynasty. Common weights were 50 taels, 10 taels, and 5 down to 1 tael.

When foreign silver coins began to circulate in China in the later 16th century, they were initially considered a type of "quasi-sycee" and imprinted with seals just as sycees were.[12]

Today, imitation gold sycees are used a symbol of prosperity among Chinese people. They are frequently displayed during Chinese New Year, representing a fortunate year to come. Reproduction or commemorative gold sycees continue to be minted as collectibles.

Another form of imitation yuanbao – made by folding gold- or silver-colored paper – can be burned at ancestors' graves during the Ghost Festival, along with imitation paper money.