The cash (Chinese: 文; pinyin: wén) was a currency denomination used in China in imperial times. It was the chief denomination until the introduction of the yuan in the late 19th century.

The English term "cash" was first used on coins issued in Kwangtung (Guangdong) Province in 1900. It did not appear on paper money. The plural forms "cash" and "cashes" were both used. The English word "cash", meaning "tangible currency", is an older word from Portuguese caixa or Middle French caisse[1] ("box, chest, case"). The Chinese character wen (Chinese: 文; pinyin: wén) has several other meanings in modern Chinese.

The wen was one of the chief units of currency in China and was used to denominate both coins and paper money. Other denominations were used, including various weights, based on the tael system, for sycee silver and gold ingots.[2]

Until the 19th century, coins denominated in wen were cast, the most common formation being the round-shaped copper coin with a square or circular hole in the centre.[2] The hole enabled the coins to be strung together to create higher denominations, as was frequently done due to the coin's low value. The number of coins in a string of cash (simplified Chinese: 一贯钱; traditional Chinese: 一貫錢; pinyin: yīguàn qián) varied over time and place but was nominally 1000.[3] A string of 1000 wén was supposed to be equal in value to one tael (liǎng) of pure silver.[4] Each string of cash was divided in ten sections of 100. The person who strung the cash into a string took one, two, or three cash per hundred, depending on local custom, as payment for his effort. So, in fact, an ounce of silver could vary in exchange from 970 to 990 cash (or more) between two places fairly close together.[5] In places in the North where there was a shortage of coinage a string of 500 or 500 exchanged for an ounce of silver. Paper money sometimes showed pictures of the appropriate number of 1 wén coins strung together.

In the 19th century, foreign coins began to circulate widely in China, particularly silver coins such as the Mexican peso. In 1889, Chinese currency began to be denominated in the yuan and its subdivisions. The cash or wén was retained in this system as  1⁄1000 yuan. Traditional style, cast 1 wén coins continued to be produced until the end of the Chinese Empire in 1911. The last coins denominated in cash were struck in the early years of the Republic of China in 1924.

Numerous authorities issued coins denominated in wén in the nineteenth century, including departments of the Imperial government (The Board of Revenue and Board of Public Works) together with provincial authorities. Most coins were 1 wén denominations, but denominations of 5, 10, 50, 100, 200, 500 and 1000 wén were also issued. After the introduction of the yuan, coins were struck in denominations of 1, 2, 5, 10 and 20 cash or wén. 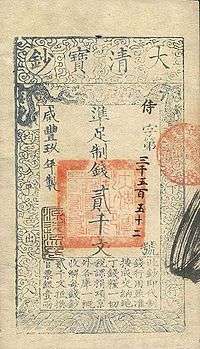 The world's first paper money, issued in China between the 7th and 15th centuries, was denominated in wén. The notes carried depictions of coins, sometimes in strings of ten. The notes of the Yuan dynasty suffered from hyperinflation due to over production without sufficient coins to back them and were withdrawn. Paper money reappeared in the 19th century. In 1853, notes were introduced in denominations of 500, 1000 and 2000 wén. 5000 wén notes followed in 1856, with 10,000, 50,000 and 100,000 wén notes added in 1857. The last of these notes were issued in 1859.

Early Korean, Japanese and Vietnamese currencies, the Korean mun, Japanese mon and Vietnamese van, were derived from the Chinese wén and written with the same character. In 1695, the Shogunate placed the character gen (Chinese: 元; pinyin: yuán) on the obverse of copper coins.[6] Vietnam gained independence from China in 938 and merely carried on the tradition of using cash. The first Vietnamese cash was issued in 968.