Not to be confused with Symmetric group.
This article is about the abstract algebraic structures. For other uses, see Symmetry group (disambiguation). 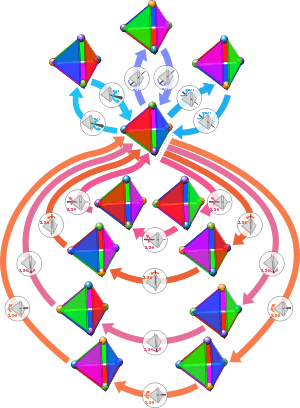 A tetrahedron is invariant under 12 distinct rotations, reflections excluded. These are illustrated here in the cycle graph format, along with the 180° edge (blue arrows) and 120° vertex (reddish arrows) rotations that permute the tetrahedron through the positions. The 12 rotations form the rotation (symmetry) group of the figure.

In abstract algebra, the symmetry group of an object (image, signal, etc.) is the group of all transformations under which the object is invariant with composition as the group operation. For a space with a metric, it is a subgroup of the isometry group of the space concerned. If not stated otherwise, this article considers symmetry groups in Euclidean geometry, but the concept may also be studied in more general contexts as expanded below.

The "objects" may be geometric figures, images, and patterns, such as a wallpaper pattern. The definition can be made more precise by specifying what is meant by image or pattern, e.g., a function of position with values in a set of colors. For symmetry of physical objects, one may also want to take their physical composition into account. The group of isometries of space induces a group action on objects in it.

Discrete symmetry groups come in three types: (1) finite point groups, which include only rotations, reflections, inversion and rotoinversion – they are just the finite subgroups of O(n), (2) infinite lattice groups, which include only translations, and (3) infinite space groups which combines elements of both previous types, and may also include extra transformations like screw displacements and glide reflections. There are also continuous symmetry groups, which contain rotations of arbitrarily small angles or translations of arbitrarily small distances. The group of all symmetries of a sphere O(3) is an example of this, and in general such continuous symmetry groups are studied as Lie groups. With a categorization of subgroups of the Euclidean group corresponds a categorization of symmetry groups.

Two geometric figures are considered to be of the same symmetry type if their symmetry groups are conjugate subgroups of the Euclidean group E(n) (the isometry group of Rn), where two subgroups H1, H2 of a group G are conjugate, if there exists g ∈ G such that H1 = g−1H2g. For example:

When considering isometry groups, one may restrict oneself to those where for all points the set of images under the isometries is topologically closed. This includes all discrete isometry groups and also those involved in continuous symmetries, but excludes for example in 1D the group of translations by a rational number. A "figure" with this symmetry group is non-drawable and up to arbitrarily fine detail homogeneous, without being really homogeneous.

The isometry groups in one dimension where for all points the set of images under the isometries is topologically closed are:

Up to conjugacy the discrete point groups in two-dimensional space are the following classes:

C1 is the trivial group containing only the identity operation, which occurs when the figure has no symmetry at all, for example the letter F. C2 is the symmetry group of the letter Z, C3 that of a triskelion, C4 of a swastika, and C5, C6, etc. are the symmetry groups of similar swastika-like figures with five, six, etc. arms instead of four.

D1 is the 2-element group containing the identity operation and a single reflection, which occurs when the figure has only a single axis of bilateral symmetry, for example the letter A.

D2, which is isomorphic to the Klein four-group, is the symmetry group of a non-equilateral rectangle. This figure has four symmetry operations: the identity operation, one twofold axis of rotation, and two nonequivalent mirror planes.

D3, D4 etc. are the symmetry groups of the regular polygons.

The actual symmetry groups in each of these cases have two degrees of freedom for the center of rotation, and in the case of the dihedral groups, one more for the positions of the mirrors.

The remaining isometry groups in two dimensions with a fixed point, where for all points the set of images under the isometries is topologically closed are:

For non-bounded figures, the additional isometry groups can include translations; the closed ones are:

The continuous symmetry groups with a fixed point include those of:

For objects and scalar fields the cylindrical symmetry implies vertical planes of reflection. However, for vector fields it does not: in cylindrical coordinates with respect to some axis,

have this symmetry, i.e., they do not depend on φ. Additionally there is reflectional symmetry if and only if

For spherical symmetry there is no such distinction, it implies planes of reflection.

The continuous symmetry groups without a fixed point include those with a screw axis, such as an infinite helix. See also subgroups of the Euclidean group.

In wider contexts, a symmetry group may be any kind of transformation group, or automorphism group. Once we know what kind of mathematical structure we are concerned with, we should be able to pinpoint what mappings preserve the structure. Conversely, specifying the symmetry can define the structure, or at least clarify what we mean by an invariant, geometric language in which to discuss it; this is one way of looking at the Erlangen programme.

For example, automorphism groups of certain models of finite geometries are not "symmetry groups" in the usual sense, although they preserve symmetry. They do this by preserving families of point-sets rather than point-sets (or "objects") themselves.

Like above, the group of automorphisms of space induces a group action on objects in it.