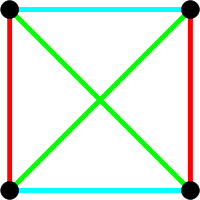 Finite affine plane of order 2, containing 4 points and 6 lines. Lines of the same color are "parallel".

A finite geometry is any geometric system that has only a finite number of points. The familiar Euclidean geometry is not finite, because a Euclidean line contains infinitely many points. A geometry based on the graphics displayed on a computer screen, where the pixels are considered to be the points, would be a finite geometry. While there are many systems that could be called finite geometries, attention is mostly paid to the finite projective and affine spaces because of their regularity and simplicity. Other significant types of finite geometry are finite Möbius or inversive planes and Laguerre planes, which are examples of a general type called Benz planes, and their higher-dimensional analogs such as higher finite inversive geometries. 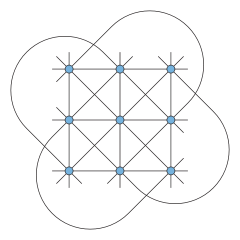 The last axiom ensures that the geometry is not trivial (either empty or too simple to be of interest, such as a single line with an arbitrary number of points on it), while the first two specify the nature of the geometry. 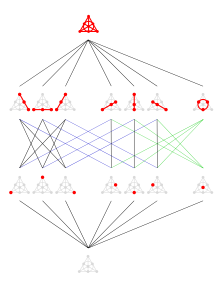 Duality in the Fano plane: Each point corresponds to a line and vice versa.

An examination of the first two axioms shows that they are nearly identical, except that the roles of points and lines have been interchanged. This suggests the principle of duality for projective plane geometries, meaning that any true statement valid in all these geometries remains true if we exchange points for lines and lines for points. The smallest geometry satisfying all three axioms contains seven points. In this simplest of the projective planes, there are also seven lines; each point is on three lines, and each line contains three points.

A permutation of the Fano plane's seven points that carries collinear points (points on the same line) to collinear points is called a collineation of the plane. The full collineation group is of order 168 and is isomorphic to the group PSL(2,7) ≈ PSL(3,2), which in this special case is also isomorphic to the general linear group GL(3,2) ≈ PGL(3,2).

Is the order of a finite plane always a prime power?

This is conjectured to be true.

The best general result to date is the Bruck–Ryser theorem of 1949, which states:

If n is a positive integer of the form 4k + 1 or 4k + 2 and n is not equal to the sum of two integer squares, then n does not occur as the order of a finite plane.

The next smallest number to consider is 12, for which neither a positive nor a negative result has been proved.

Individual examples can be found in the work of Thomas Penyngton Kirkman (1847) and the systematic development of finite projective geometry given by von Staudt (1856).

The first axiomatic treatment of finite projective geometry was developed by the Italian mathematician Gino Fano. In his work[1] on proving the independence of the set of axioms for projective n-space that he developed,[2] he considered a finite three dimensional space with 15 points, 35 lines and 15 planes (see diagram), in which each line had only three points on it.[3]

In 1906 Oswald Veblen and W. H. Bussey described projective geometry using homogeneous coordinates with entries from the Galois field GF(q). When n + 1 coordinates are used, the n-dimensional finite geometry is denoted PG(n, q).[4] It arises in synthetic geometry and has an associated transformation group.

Finite spaces of 3 or more dimensions

A projective space S can be defined axiomatically as a set P (the set of points), together with a set L of subsets of P (the set of lines), satisfying these axioms :[5]

The last axiom eliminates reducible cases that can be written as a disjoint union of projective spaces together with 2-point lines joining any two points in distinct projective spaces. More abstractly, it can be defined as an incidence structure (P, L, I) consisting of a set P of points, a set L of lines, and an incidence relation I stating which points lie on which lines.

In any finite projective space, each line contains the same number of points and the order of the space is defined as one less than this common number.

A subspace of the projective space is a subset X, such that any line containing two points of X is a subset of X (that is, completely contained in X). The full space and the empty space are always subspaces.

The geometric dimension of the space is said to be n if that is the largest number for which there is a strictly ascending chain of subspaces of this form:

In general, the number k-dimensional subspaces of PG(n, q) is given by the product:[7]

The smallest 3-dimensional projective space is over the field GF(2) and is denoted by PG(3,2). It has 15 points, 35 lines, and 15 planes. Each plane contains 7 points and 7 lines. Each line contains 3 points. As geometries, these planes are isomorphic to the Fano plane. 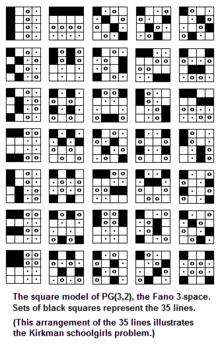 In 1892, Gino Fano was the first to consider such a finite geometry.

PG(3,2) can arise as a solution of Kirkman's schoolgirl problem, which states: “Fifteen schoolgirls walk each day in five groups of three. Arrange the girls’ walk for a week so that in that time, each pair of girls walks together in a group just once.” (See answer in external link.) There are 35 different combinations for the girls to walk together. There are also 7 days of the week, and 3 girls in each group. Two of the seven non-isomorphic solutions to this problem can provide a visual representation of the Fano 3-space. Some diagrams for this problem can be found at :

Each color represents the day of the week (seven colors, blue, green, yellow, purple, red, black, and orange). The definition of a Fano space says that each line is on three points. The figure represents this showing that there are 3 points for every line. This is the basis for the answer to the schoolgirl problem. This figure is then rotated 7 times. There are 5 different lines for each day, multiplied by 7 (days) and the result is 35. Then, there are 15 points, and there are also 7 starting lines on each point. This then gives a representation of the Fano 3-space, PG(3,2).