The Tamil calendar is a sidereal Hindu calendar used in Tamil Nadu, India.[1][2] It is also used in Puducherry, and by the Tamil population in Malaysia, Singapore, Mauritius and Sri Lanka. Tamil Nadu farmers greatly refer to this. It is used today for cultural, religious and agricultural events,[3] with the Gregorian calendar largely used for official purposes both within and outside India. The Tamil calendar is based on the classical Hindu lunisolar calendar also used in Assam, West Bengal, Kerala, Manipur, Nepal, Odisha, Rajasthan and Punjab.

There are several festivals based on the Tamil Hindu calendar. The Tamil New Year follows the nirayanam vernal equinox[4] and generally falls on 14 April of the Gregorian year. 14 April marks the first day of the traditional Tamil calendar and this remains a public holiday in both Tamil Nadu and Sri Lanka. Tropical vernal equinox fall around 22 March, and adding 23 degrees of trepidation or oscillation to it, we get the Hindu sidereal or Nirayana Mesha Sankranti (Sun's transition into nirayana Aries). Hence, the Tamil calendar begins on the same date in April which is observed by most traditional calendars of the rest of India - Assam, Bengal, Kerala, Odisha, Manipur, Punjab etc.[5] This also coincides with the traditional new year in Burma, Cambodia, Laos, Sri Lanka, Bangladesh Nepal and Thailand. The 60-year cycle is also very ancient and is observed by most traditional calendars of India and China, and is related to 5 revolutions of Jupiter according to popular belief, or to 60-year orbit of Nakshatras (stars) as mentioned in Surya Siddhanta.

The traditional Tamil year starts on 14 April 2016, Kaliyuga 5118. Vikrama and Shalivahana Saka eras are also used. There are several references in early Tamil literature to the April new year. Nakkirar, the author of the Nedunalvaadai writes in the 3rd century that the Sun travels from Mesha/Chitterai through 11 successive Raasis or signs of the zodiac.[6] Kūdalūr Kizhaar in the 3rd century refers to Mesha Raasi/Chitterai as the commencement of the year in the Puranaanooru.[7][8] The Tolkaapiyam is the oldest surviving Tamil grammar that divides the year into six seasons where Chitterai marks the start of the Ilavenil season or summer. The 8th century Silappadikaaram mentions the 12 Raasis or zodiac signs starting with Mesha/Chitterai.[9] The Manimekalai alludes to the Hindu solar calendar as we know it today. Adiyaarkunalaar, an early medieval commentator or Urai-asiriyar, mentions the 12 months of the Tamil Hindu calendar with particular reference to Chitterai. There were subsequent inscriptional references in Pagan, Burma dated to the 11th century CE and in Sukhothai, Thailand dated to the 14th century CE to South Indian, often Vaishnavite, courtiers who were tasked with defining the traditional calendar that began in mid-April.[10]

The days of the Tamil Calendar relate to the celestial bodies in the solar system: Sun, Moon, Mars, Mercury, Jupiter, Venus, and Saturn, in that order. The week starts with Sunday.

This list compiles the days of the week in the Tamil calendar:

For Tamils, each day begins at the sun rise.

The number of days in a month varies between 29 and 32.

The following list compiles the months of the Tamil Calendar. 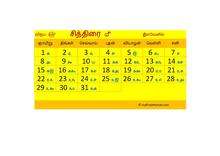 The Tamil year, in keeping with the old Indic calendar, is divided into six seasons, each of which lasts two months:

The 60-year cycle is common to both North and South Indian traditional calendars, with the same name and sequence of years. Its earliest reference is to be found in Surya Siddhanta, which Varahamihirar (550 CE) believed to be the most accurate of the then current theories of astronomy. However, in the Surya Siddhantic list, the first year was Vijaya and not Prabhava as currently used. There are some parallels in this sexagenary cycle with the Chinese calendar.[12][13][14] The Surya Siddhanta and other Indian classical texts on astronomy had some influence on the Chinese calendar[15] although it merits attention that the sexagenary cycle in China is itself very old.

The following list presents the current 60-year cycle of the Tamil calendar:[16]

The months of the Tamil Calendar have great significance and are deeply rooted in the faith of the TamilHindus. Some months are considered very auspicious while a few are considered inauspicious as well. Tamil months start and end based on the Sun's shift from one Rasi to the other but the names of the months are based on the star on the start of Pournami in that month. The name of the month is some times the name of the star itself. (e.g. Chithrai is always the star on the Pournami of the Chithirai month).

Some of the celebrations for each month are listed below. Dates in parentheses are not exact and usually vary by a day or two. Underneath (or beside) the months of the Hindu calendar are their Gregorian counterparts.[17][18]

The Tamil Calendar is important in the life of Tamil-speaking people and most Festivals of Tamil Nadu are based on it. Some Festivals include Tamil New Year (also called Puthandu) in mid-April, Thai Pongal, Deepavali, Panguni Uthiram, Thirukaarthigai, Aadiperukku, Navaratri etc. One day was even dedicated to a celebration of the Tamil alphabet and was called "ezhuthu naal'.