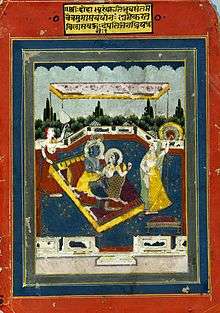 Chaitra month, Jaipur miniature in the National Museum in Warsaw.

Chaitra is a month of the Hindu calendar.

In the more traditional reckoning, the first month commences in March or April of the Gregorian Calendar,[1][2] depending upon whether the Purushottam Maas (extra month for alignment of lunar or solar calendar) was observed in the year. There is no fixed date in Gregorian calendar for 1st day of Chaitra, i.e., the beginning of the Hindu New Year.

The month of Chaitra is also associated with the coming of Spring.Holi, the spring festival of colour, is celebrated on the full moon day (Purnima) of Phalguna month before Chaitra. Exactly 6 days after which the festival of Chaiti observed.

In lunar religious calendars, Chaitra begins with the new moon in March/April and is the first month of the year. The first of Chaitra – is celebrated as New Year's Day, known as Gudi Padwa[3] in Maharashtra, Chaitrai Vishu or Puthandu in Tamil Nadu[4] and Ugadi in Karnataka and Andhra Pradesh.

Other important festivals in the month are; Chaitra Navratri, Ram Navami - the birth anniversary of Lord Ram celebrated on the 9th day of Chaitra, and Hanuman Jayanti that falls on the last day (purnima) of Chaitra. In Bengal people celebrate Charak Puja.The world famous "chithirai Thiruvizha" which is held on the banks of vaigai is held during this month in Madurai.

In the Tamil calendar, Chitterai begins with the Sun's entry into Aries in mid-April, and is the first month of the year. The full moon day of chaitra is known as "chithira pournami" in Tamil which is an auspicious day for Amman.

Chaitra is considered to be a very auspicious month in which the creation of the universe was started.

"Chaitra" can also be used as a name, with the meaning of "Spring" or "Aries Sign"

According to the Sloka Chaturvarga Chintamani, the god Bramha created the universe on the first day of Shukla paksha (first fortnight / first half of the month) in the month of Chaitra. He also gradually included planets, stars, ruthu (seasons), years and lords of years.

In this month, the fifteen days in Shukla paksha are dedicated to fifteen deities. Each day of the month is dedicated to a different god.