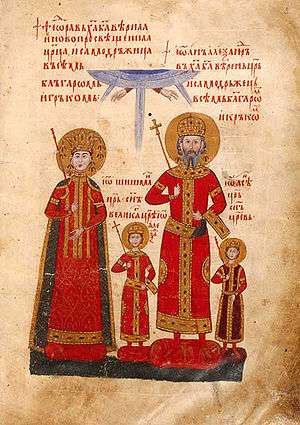 One of the 366 miniatures of the Tetraevangelia of Ivan Alexander - one of the most famous works of the Tarnovo Literary School.

The Tarnovo Literary School (Bulgarian: Търновска книжовна школа) of the late 14th and 15th century was a major medieval Bulgarian cultural academy with important contribution to the Medieval Bulgarian literature established in the capital of Bulgaria Tarnovo. It was part of the Tarnovo School of Art which was characteristic for the culture of the Second Bulgarian Empire.

With the orthographic reform of Saint Evtimiy of Tarnovo and prominent representatives such as Gregory Tsamblak or Constantine of Kostenets the school influenced Russian, Serbian, Wallachian and Moldavian medieval culture. That is famous in Russia as the second South-Slavic influence.

The main prerequisite for the Tarnovo Literary School was the cultural revival of the late 14th century. It was largely due to the interest of Emperor Ivan Alexander (1331–1371) in literature and art and the traditions that he left to his sons and successors Ivan Shishman and Ivan Stratsimir in that direction. Patriarch Theodosius of Tarnovo also had some credit to the establishment of the School.

The school was established in the capital of the Bulgarian Empire Tarnovo by Saint Evtimiy of Tarnovo. It established his orthographic and linguistic reform rules of the Bulgarian language and wrongly translated texts were corrected, becoming models for the Orthodox churches of Bulgaria, Serbia, Wallachia, Moldavia and Russia that also used the Church Slavonic language.

The main work of the writers of the Tarnovo Literary School included writing original literature, translation of books from Greek and creation of compilations.

The literature of the Tarnovo literary school is divided into two major parts - religious and secular. The religious literature is represented by praising epistles, passionals, hymns and others. The main task for the authors of the passionals was to glorify the saints and there is a marked stress on the element of miracles which is compulsory for that genre used by most of the writers, such as Evtimiy and Tsamblak. The attitude to the different heretic movements like Bogomilism, Barlaamism or Adamism is very hostile which mirrored the official position of the Tarnovo Patriarchate.

The secular literature include a short stories, novels, novelettes, poetry and chronicles. According to the type of stories the novelettes can be divided into three main parts: antique ("Alexandria", "Troyanska pritcha" (Trojan legend) and others, which depicting scenes from the history of ancient Greece), Eastern novelettes ("Varlaam and Yoasaf", "Akir Premadry" - texts from the Indian and Assyrian-Babylonian literature) and medieval ("Teophana - The proprietress" and events in the history of Bulgaria and Byzantium). The novels are very diverse, but also can be divided into three groups: the chronicles (stories about historical events), patherical texts (short stories with one story) and ancient - folklore ("Tales of Aesop", "By the Origin of Samodivas" with themes from Bulgarian mythology and ancient history).

Stories for movement of saints' relics were very wide spread, but there is no agreement whether these stories can be considered for sequels of the passionals or a separate genre. Along with the consolidation of the miraculous properties of the relics, the authors praised the rulers who took care of their movement and safe-keeping which always contain short but valuable historical information.

The main representatives include: 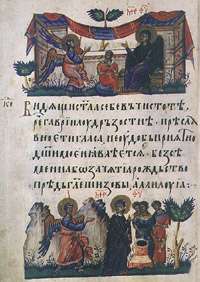 A page of the Tomić Psalter produced around 1360.