For Tawse as a genealogical branch of the Scottish Clan Farquharson, see Sept (social). 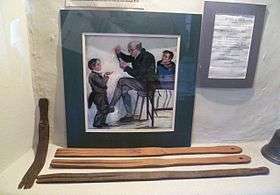 Museum specimens of the tawse

The tawse, sometimes formerly spelled taws (the plural of Scots taw, a thong of a whip) is an implement used for corporal punishment. It was used for educational discipline, primarily in Scotland, but also in schools in the English cities of Newcastle upon Tyne, Gateshead, Manchester and Walsall.

A tawse consists of a strip of leather, with one end split into a number of tails. The thickness of the leather and the number of tails is variable. Many Scottish saddlers made tawses for local schoolmasters. The official name "tawse" was hardly ever used in conversation by either teachers or pupils, who instead referred to it as either the school strap or the belt, the normal term for an unforked implement, as worn in trousers (see belt).

Scottish public (state) schools used the tawse to punish pupils of either sex on the palm of the outstretched hand. Pupils were usually instructed to hold out one hand, palm uppermost, supported by the other hand below, which made it difficult to move the hand away during the infliction of the strokes. It also ensured that the full force of each stroke was taken by the hand being strapped. The punishment was usually inflicted by the class teacher in front of the class, to act as a deterrent to others; sometimes by a designated teacher, such as the Deputy Headmaster, to whom the pupil was sent.

In Walsall and Gateshead, and in some schools in Manchester and Nottingham, male students were tawsed on the seat of the trousers.

Some Scottish private (independent) schools also used the tawse, such as Keil School, but others such as Fettes College used the cane instead, as did most schools in England outside the north-east.

In 1982 a judgment of the European Court of Human Rights about parental choice in education led indirectly to the use of the tawse (and all other forms of corporal punishment) being banned by law in UK state schools. The legislation came into force in 1987, but most Scottish local education authorities had already abolished it by the early 1980s.

Original tawses manufactured in Lochgelly in Fife are now considered collectables and may be sold for several hundred pounds each.