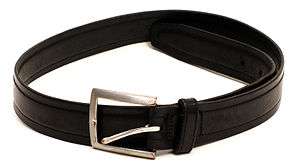 A belt is a flexible band or strap, typically made of leather or heavy cloth, and worn around the waist. A belt supports trousers or other articles of clothing. It is an item of accessory.

Pattern on a cloth belt that is part of one Estonian national costume.

Belts have been documented as male clothing since the Bronze Age. Both genders have used them off and on, depending on the current fashion. In the western world, belts have been more common for men, with the exception of the early Middle Ages, late 17th century Mantua, and skirt/blouse combinations between 1900 and 1910. Art Nouveau belt buckles are now collectors' items.

In the latter half of the 19th century and until the First World War, the belt was a decorative as well as utilitarian part of military uniform, particularly among officers. In the armed forces of Prussia, Tsarist Russia, and other Eastern European nations, it was common for officers to wear extremely tight, wide belts around the waist, on the outside of the uniform, both to support a saber and for aesthetic reasons. These tightly cinched belts served to draw in the waist and give the wearer a trim physique, emphasizing wide shoulders and a pouting chest. Often the belt served only to emphasize the waist made small by a corset worn under the uniform, a practice which was common especially during the Crimean Wars and was often noted by soldiers from the Western Front. Political cartoonists of the day often portrayed the tight waist-cinching of soldiers to comedic effect, and some cartoons survive showing officers being corseted by their inferiors, a practice which surely was uncomfortable but was deemed to be necessary and imposing.

In modern times, men started wearing belts in the 1920s, as trouser waists fell to a lower line. Before the 1920s, belts served mostly a decorative purpose, and were associated with the military. Moreover, prior to that trousers did not even have belt loops. As sportswear, trousers with belt loops were already present in the 19th century.[1] Today it is common for men to wear a belt with their trousers.

In some countries, especially the United States, a father's belt can be associated with corporal punishment. As belts are constructed out of materials like leather that are both strong and light, a belt can be easily wielded to produce intense pain by using it as a whip to strike the buttocks of a misbehaving child. Moreover, belts are convenient disciplinary tools, as they are generally immediately available for use. The belt can symbolize fatherly authority and paternal responsibility for one's children's behavior and moral development.

Since the mid-1990s, the practice of sagging has been practised at times among young men and boys. This practice is sometimes incorrectly believed to have originated with prison gangs[2] and the prohibition of belts in prison (due to their use as weapons and devices for suicide). 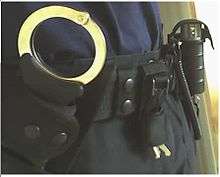 A police officer's duty belt (not a leg belt).

The Republica Fashion's Gucci 30 carat Diamond belt, studded with diamonds and a platinum buckle, has been advertised as the most expensive production belt ever produced.[3]