Teachers College at Columbia University is an independent, graduate school of education and one of Columbia's graduate and professional schools in New York City.

It was founded in 1887 and has been affiliated with Columbia University and as a faculty of the University since 1898.[2] According to the College, "Teachers College, Columbia University is the first and largest graduate school of education in the United States and is also perennially ranked among the nation’s best. Its name notwithstanding, the College is committed to a vision of education writ large, encompassing our four core areas of expertise: health, education, leadership, and psychology."[3]

While the name Teachers College reflects a dedication to producing quality teachers, less than one-third of Teachers College students are at any one time preparing to become teachers. With more than sixty programs of study, graduates go on to pursue careers in psychology, social and behavioral sciences, health and health promotion, educational policy, technology, international and comparative education, as well as education and educational leadership. Students are candidates for Masters of Arts (M.A.), Master of Education (Ed.M.), Master of Science (M.S.), Doctor of Education (Ed.D.), and Doctor of Philosophy (Ph.D.) degrees.

In 2016, Teachers College was ranked #7 among all graduate schools of education by U.S. News & World Report.[4] 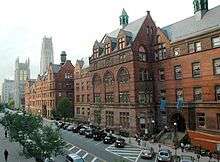 Teachers College was founded in 1880 by the philanthropist Grace Hoadley Dodge and philosopher Nicholas Murray Butler to provide schooling for the teachers of the poor children of New York City. The curriculum combined a humanitarian concern to help others with a scientific approach to human development. Beginning as a school to prepare home economists and manual art teachers for the children of the poor, the College affiliated with Columbia University in 1898 as the University's Graduate School of Education. Unlike normal schools, after 1893 Teachers College required all students to have a high school diploma. Its professional teacher education was considered the equivalent of the junior and senior years of college. Many early students who lacked preparation for the advanced coursework first took introductory liberal arts classes, often at Barnard College.[5]

The founders early recognized that professional teachers need reliable knowledge about the conditions under which children learn most effectively. As a result, the College's program from the start included such fundamental subjects as educational psychology and educational sociology. The founders also insisted that education must be combined with clear ideas about ethics and the nature of a good society; consequently programs were developed in the history of education and in comparative education. As the number of school children increased during the twentieth century, the problems of managing the schools became ever more complex. The college took on the challenge and instituted programs of study in areas of administration, economics, and politics. Other programs developed in such emerging fields as clinical and counseling psychology, organizational psychology, developmental psychology, cognitive psychology, curriculum development, instructional technology, media studies and school health care.

The area of developmental psychology (mentioned earlier,) has specially received numerous accolades. Teachers College was also associated with philosopher John Dewey who taught at the facility.[6]

From 1932 to 1939, Teachers College was home to the experimental New College for the Education of Teachers, a progressive undergraduate college. Founded by Richard Thomas Alexander, the College used the same facilities as Teachers College at the Morningside Heights campus; additionally, the College had learning communities established in North Carolina, Georgia, and abroad in foreign study groups. Using innovative ideas such as extended foreign study, community-based active research, and authentic assessment, a portfolio-based undergraduate learning curriculum was developed which rejected traditional summative grades or the accumulation of credits in favor of experiential education as the basis of degree completion. The college was closed due to a combination of growing financial deficits and student activism in 1939.[7]

Teachers College has played a role in curriculum reform efforts, such as during the "New Math" movement of the 1960s with its Secondary School Mathematics Curriculum Improvement Study program.[8][9]

According to its president,[10] Teachers College, Columbia University provides solutions to the difficult problems of urban education, reaffirming its original mission in providing a new kind of education for those left most in need by society or circumstance. The college continues its collaborative research with urban and suburban school systems that strengthen teaching in such fundamental areas as reading, writing, science, mathematics, and the arts; prepares leaders to develop and administer psychological and health care programs in schools, hospitals and community agencies; and advances technology for the classroom, developing new teaching software and keeping teachers abreast of new developments. Teachers College also houses a wide range of applied psychology degrees, including one of the nation's leading programs in Organizational Psychology.

While the name Teachers College reflects a dedication to producing quality teachers, less than one-third of Teachers College students are at any one time preparing to become teachers. With more than sixty programs of study, graduates go on to pursue careers in psychology, social and behavioral sciences, health and health promotion, educational policy, technology, international and comparative education, as well as education and educational leadership. Students are candidates for Masters of Arts (M.A.), Master of Education (Ed.M.), Master of Science (M.S.), Doctor of Education (Ed.D.), and Doctor of Philosophy (Ph.D.) degrees.

The student experience at Teachers College is governed by a student senate, headed by the Senate President, followed by the Vice-President, Parliamentarian, Communications Officer, and Treasurer. Two Senators, a Master's candidate, & a PhD candidate, are elected each year to represent each academic department at Teachers College to advocate on behalf of current students and Alumni. The TC Senate meets bi-weekly to determine what issues need to be investigated.

Teachers College holds its own corporate status separate from Columbia University, including an independent board of trustees, budget, endowment, and multiple admissions standards.

However, as noted in Columbia University's Faculty Handbook,

"The basic organizing units of the University are its 20 Faculties and 78 departments of instruction. The Faculties are commonly referred to as schools or colleges, depending upon historical circumstances...Two affiliated institutions – Barnard College and Teachers College – are also Faculties of the University."

Similar to Barnard, Teachers College faculty hold Columbia University appointments; its president is a dean of the University; and all students receive their degrees from Columbia University. Additionally, the "Organization and Governance of the University" section in the Columbia University Faculty Handbook states, "Faculty constitute a majority of the representatives in the Senate. There are 42 tenured and 15 nontenured representatives from Columbia proper. In addition, the faculty of Barnard College and Teachers College are represented by two senators each, who may be either tenured or nontenured, while those at Union Theological Seminary are represented by one."[11] Similar to Barnard, the diploma is conferred by Columbia University and its Board of Trustees. On February 1, 2007, the Columbia Spectator reported, "University President Lee Bollinger likened the relationship between TC and the University to "a kind of marriage," stating the most important burden of the two institutions is how to make knowledge accessible to as many young people as possible." Moreover, the "Benefits and Family Services" section in the Columbia University Faculty Handbook outlines the services the University offers its faculty and officers of research. It states, "Barnard College and Teachers College have their own benefits programs; their faculty do not participate in the Columbia programs described in this chapter of the Handbook." Students at both institutions may cross-register for courses and have access to Columbia's student organizations, libraries, and facilities.

However, unlike Barnard College,

"The University’s 78 active departments of instruction serve as the primary units within which faculty are appointed, instruction is provided, and research is conducted...The Faculty of Teachers College serves as the University’s Department of Education."[11]

Graduate students at Teachers College are generally ineligible to be a student officer of instruction or research. As the "Student Officers of Instruction and Research" section in the Columbia University Faculty Handbook states, "With certain exceptions for undergraduate and special students as described below, these students must be enrolled as degree candidates in a graduate program of the University other than Teachers College. While students at Teachers College may in unusual circumstances be offered teaching assignments, they are appointed as associates rather than as student officers of instruction."

In 2016, Teachers College was ranked #7 among all graduate schools of education by U.S. News & World Report.[4]

In 2010, Teachers College peaked at #2 in the annual U.S. News & World Report ranking of graduate schools of education, behind Vanderbilt University.

Teachers College Record has been published by the school continuously since 1900. In 1997 a group of doctoral students from Teachers College established the journal Current Issues in Comparative Education (CICE), a leading open-access online academic journal.[17]

Teachers College Press, founded in 1904, is the national and international book publishing arm of Teachers College and is dedicated to deepening the understanding and improving the practice of education.