The university has one of the most diverse student bodies in the United States, with students hailing from 208 countries. The black, white and Hispanic undergraduate populations each comprise more than a quarter of the student body, and Asian undergraduates make up 18 percent. Fifty-eight percent are female, and 28 percent are 25 or older.[5]

The following table is 'sortable'; click on a column heading to re-sort the table by values of that column.

CUNY was created in 1961, by New York State legislation, signed into law by Governor Nelson Rockefeller. The legislation integrated existing institutions and a new graduate school into a coordinated system of higher education for the city, under the control of the "Board of Higher Education of the City of New York", which had been created by New York State legislation in 1926. By 1979, the Board of Higher Education had become the "Board of Trustees of the CUNY".[6]

The institutions that were merged in order to create CUNY were:[6]

CUNY has served a diverse student body, especially those excluded from or unable to afford private universities. Its four-year colleges offered a high quality, tuition-free education to the poor, the working class and the immigrants of New York City who met the grade requirements for matriculated status. During the post-World War I era, when some Ivy League universities, such as Yale University, discriminated against Jews, many Jewish academics and intellectuals studied and taught at CUNY.[7] The City College of New York developed a reputation of being "the Harvard of the proletariat."[8]

As the city's population—and public college enrollment—grew during the early 20th century and the city struggled for resources, the municipal colleges slowly began adopting selective tuition, also known as instructional fees, for a handful of courses and programs. During the Great Depression, with funding for the public colleges severely constrained, limits were imposed on the size of the colleges' free Day Session, and tuition was imposed upon students deemed "competent" but not academically qualified for the day program. Most of these "limited matriculation" students enrolled in the Evening Session, and paid tuition.[9]

Demand in the United States for higher education rapidly grew after World War II, and during the mid-1940s a movement began to create community colleges to provide accessible education and training. In New York City, however, the community-college movement was constrained by many factors including "financial problems, narrow perceptions of responsibility, organizational weaknesses, adverse political factors, and another competing priorities."[10]

Three community colleges had been established by early 1961, when the city's public colleges were codified by the state as an single university with a chancellor at the helm and an infusion of state funds. But the city's slowness in creating the community colleges as demand for college seats was intensifying, had resulted in mounting frustration, particularly on the part of minorities, that college opportunities were not available to them.

In 1964, as the city's Board of Higher Education moved to take full responsibility for the community colleges, city officials extended the senior colleges' free tuition policy to them, a change that was included by Mayor Robert Wagner in his budget plans and took effect with the 1964–65 academic year.[13]

In 1969, a group of Black and Puerto Rican students occupied City College demanding the racial integration of CUNY, which at the time had an overwhelmingly white student body.[10]

Students at some campuses became increasingly frustrated with the university's and Board of Higher Education's handling of university administration. At Baruch College in 1967, over a thousand students protested the plan to make the college an upper-division school limited to junior, senior, and graduate students.[14] At Brooklyn College in 1968, students attempted a sit-in to demand the admission of more black and Puerto Rican students and additional black studies curriculum.[15] Students at Hunter College also demanded a Black studies program.[16] Members of the SEEK program, which provided academic support for underprepared and underprivileged students, staged a building takeover at Queens College in 1969 to protest the decisions of the program's director, who would later be replaced by a black professor.[17][18] Puerto Rican students at Bronx Community College filed a report with the New York State Division of Human Rights in 1970, contending that the intellectual level of the college was inferior and discriminatory.[19] Hunter College was crippled for several days by a protest of 2,000 students who had a list of demands focusing on more student representation in college administration.[20] Across CUNY, students boycotted their campuses in 1970 to protest a rise in student fees and other issues, including the proposed (and later implemented) open admissions plan.[21]

Like many college campuses in 1970, CUNY faced a number of protests and demonstrations after the Kent State shootings and Cambodian Campaign. The Administrative Council of the City University of New York sent U.S. President Richard Nixon a telegram in 1970 stating, "No nation can long endure the alienation of the best of its young people."[22] Some colleges, including John Jay College of Criminal Justice, historically the "college for cops," held teach-ins in addition to student and faculty protests.[23]

In 1969, the Board of Trustees implemented a new admissions policy. The doors to CUNY were opened wide to all those demanding entrance, assuring all high school graduates entrance to the university without having to fulfill traditional requirements such as exams or grades. This policy was known as open admissions and nearly doubled the number of students enrolling in the CUNY system to 35,000 (compared to 20,000 the year before). With greater numbers came more diversity: Black and Hispanic student enrollment increased threefold.[24] Remedial education, to supplement the training of under-prepared students, became a significant part of CUNY's offerings.[25]

In fall 1976, during New York City's fiscal crisis, the free tuition policy was discontinued under pressure from the federal government, the financial community that had a role in rescuing the city from bankruptcy, and New York State, which would take over the funding of CUNY's senior colleges.[26] Tuition, which had been in place in the State University of New York system since 1963, was instituted at all CUNY colleges.[27][28]

Meanwhile, CUNY students were added to the state's need-based Tuition Assistance Program (TAP), which had been created to help private colleges.[29] Full-time students who met the income eligibility criteria were permitted to receive TAP, ensuring for the first time that financial hardship would deprive no CUNY student of a college education.[29] Within a few years, the federal government would create its own need-based program, known as Pell Grants, providing the neediest students with a tuition-free college education. By 2011, nearly six of ten full- time undergraduates qualified for a tuition-free education at CUNY due in large measure to state, federal and CUNY financial aid programs.[30] CUNY's enrollment dipped after tuition was re-established, and there were further enrollment declines through the 1980s and into the 1990s.

In 1995, CUNY suffered another fiscal crisis when Governor George Pataki proposed a drastic cut in state financing.[31] Faculty cancelled classes and students staged protests. By May, CUNY adopted deep cuts to college budgets and class offerings.[32] By June, in order to save money spent on remedial programs, CUNY adopted a stricter admissions policy for its senior colleges: students deemed unprepared for college would not be admitted, this a departure from the 1970 Open Admissions program.[33] That year's final state budget cut funding by $102 million, which CUNY absorbed by increasing tuition by $750 and offering a retirement incentive plan for faculty.

In 1999, a task force appointed by Mayor Rudolph Giuliani issued a report that described CUNY as "an institution adrift" and called for an improved, more cohesive university structure and management, as well as more consistent academic standards. Following the report, Matthew Goldstein, a mathematician and City College graduate who had led CUNY's Baruch College and briefly, Adelphi University, was appointed chancellor. CUNY ended its policy of open admissions to its four-year colleges, raised its admissions standards its most selective four-year colleges (Baruch, Brooklyn, City, Hunter and Queens), and required new-enrollees who needed remediation, to begin their studies at a CUNY open-admissions community colleges.[34]

CUNY's enrollment of degree-credit students reached 220,727 in 2005 and 262,321 in 2010 as the university broadened its academic offerings.[35] The university added more than 2,000 full-time faculty positions, opened new schools and programs, and expanded the university's fundraising efforts to help pay for them.[34] Fundraising increased from $35 million in 2000 to more than $200 million in 2012.[36]

As of Autumn 2013, all CUNY undergraduates are required to take an administration-dictated common core of courses which have been claimed to meet specific "learning outcomes" or standards. Since the courses are accepted University wide, the administration claims it will be easier for students to transfer course credits between CUNY colleges. It also reduced the number of core courses some CUNY colleges had required, to a level below national norms, particularly in the sciences.[37][38] The program is the target of several lawsuits by students and faculty, and was the subject of a "no confidence" vote by the faculty, who rejected it by an overwhelming 92% margin.[39] 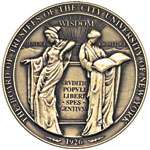 The administrative offices are in mid-town Manhattan.[41]

Chairs of the board

CUNY has its own public safety force whose duties are to protect and serve all students and faculty members, and enforce all state and city laws at all of CUNY's universities. The force has more than 1000 officers, making it one of the largest public safety forces in New York City.

The Public Safety Department came under heavy criticism, from student groups, after several students protesting tuition increases tried to occupy the lobby of the Baruch College. The occupiers were forcibly removed from the area and several were arrested on November 21, 2011.[42]