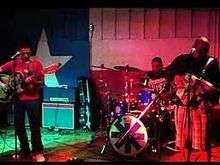 Europeans from Germany (first during Spanish time and 1830s), Poland, and what is now the Czech Republic migrated to Texas and Mexico, bringing with them their style of music and dance. They brought with them the waltz, polkas and other popular forms of music and dance. However it was not until the Mexican Revolution (1910–1917) that forced many of these Europeans to flee Mexico and into South Texas, that their musical influence was to have a major impact on Tejanos.

At the turn of the century, Tejanos were mostly involved in ranching and agriculture. The only diversion was the occasional traveling musician who would come to the ranches and farms. Their basic instruments were the flute, guitar, and drum, and they sang songs that were passed down through the generations from songs originally sung in Mexico. One of these musicians was Lydia Mendoza, who became one of the first to record Spanish language music as part of RCA's expansion of their popular race records of the 1920s. As these traveling musicos traveled into areas where the German Texans, Poles, and Czechs lived, they began to incorporate the oom-pah sound into their music. Narciso "El Huracan del Valle" Martinez, known as the father of conjunto music, defined the accordion's role in conjunto music.

Central to the evolution of early Tejano music was the blend of traditional forms such as the corrido and mariachi, and Continental European styles, such as polka,[1] introduced by German and Czech settlers in the late 19th century. In particular, the accordion was adopted by Tejano folk musicians at the turn of the 20th century, and it became a popular instrument for amateur musicians in Texas and Northern Mexico. Small bands known as orquestas, featuring amateur musicians, became a staple at community dances.

Norteño/conjunto accordion pioneer Narciso Martínez learned many tunes from German and Czech brass bands and transposed them to his accordion.[2] Martínez gave accordion playing a new virtuosity in the 1930s, when he adopted the two button row accordion. At the same time, he formed a group with Santiago Almeida, a bajo sexto player. Their new musical style, known as conjunto, soon became the popular music of the working class Tejano. Flaco Jiménez carried on Martinez's tradition of accordion virtuosity and became a fixture on the international World Music scene by the 1980s.

In the 1950s and 1960s, rock and roll and country music made inroads, and electric guitars and drums were added to conjunto combos. Also, performers such as Little Joe added both nuances of jazz and R&B, and a Chicano political consciousness.

The 1960s and 1970s brought a new fusion of cultures and the first La Onda Tejana Broadcasters. Popular Tejano musician and producer Paulino Bernal of the Conjunto Bernal discovered and introduced to the Tejano music scene the norteño band Los Relampagos Del Norte with Ramón Ayala and Cornelio Reyna on his Bego Records. Ayala still enjoys success on both sides of the border. Reyna enjoyed a very successful career as an actor and singer and resurfaced in the Tejano scene with a major hit with his collaboration with Tejano artist La Mafia. He toured constantly until his death. In the 1960s and 1970s, the first La Onda Tejana broadcasting pioneers hit the airwaves including Marcelo Tafoya (first recipient of the Tejano Music Awards "Lifetime Achievement Award), Mary Rodriguez, Rosita Ornelas, and Luis Gonzalez, shortly followed by an influx of broadcasters including the Davila family of San Antonio. This central Texas support by popular broadcasters helped fuel La Onda.

La Onda continued to surge in the early to mid-1980s with the fusion progression of tejano music coming to the forefront regionally with "tejano ballads" like Espejismo's hit "Somos Los Dos", written and sung by McAllen native Rudy Valdez, and La Sombra with their Tex-Mex English & Spanish brand of tejano. As the 1990s dawned, La Mafia, already holding over a dozen Tejano Music Awards, originated a new tejano style later to become a tejano standard. La Mafia combined a pop beat to the popular Mexican cumbia and achieved success never before seen in the tejano industry, becoming the first tejano artist to sell over one million albums with Estas Tocando Fuego in 1992. With extensive touring from as early as 1988, they eventually opened the doors for such artists as Selena, Emilio Navaira, Jay Perez, and Grupo Mazz. Electronic instruments and synthesizers increasingly dominated the sound, and tejano music increasingly appealed to bilingual country and rock fans. In the wake of her murder, Selena's music received attention from a mainstream American audience as well. Selena, known as "Queen of Tejano Music", became the first female tejano artist to win a Grammy and her Ven Conmigo became the first tejano album by a female artist certified gold.

Tejano music was born in Texas. Although it has influences from Mexico and other Latin American countries, the main influences are American. The types of music that make up Tejano are: Pop, Rock, Polka, R&B, and Latin influences (Conjunto, Mariachi, Ranchera, Mexican cumbia, Corrido, etc...). Contemporary classic Tejano artists such as Emilio and Raulito Navaira, Albert Zamora, David Lee Garza, and Jay Perez exhibit influence from rock, blues, funk, and country.

Tejano has various categories of music and bands. Three major categories are "Conjunto", "Orchestra", and "Modern". A Conjunto band is composed of accordion, bajo sexto, bass, and drum. Examples of conjunto bands are Esteban "Steve" Jordan, The Hometown Boys and Jaime Y Los Chamacos. An Orchestra consists of bass, drum, electric guitar, synthesizer, and a brass section on which it relies heavily for its sound. It can also have an accordion in the band at times. An example of an Orchestra is Ruben Ramos and the Texas Revolution, The Liberty Band and The Latin Breed. A Modern Tejano band consists of synthesizers, drums, electric guitar, bass and at times an accordion. It relies heavily on the synthesizer for its sound. Some examples of Modern bands are La Mafia, Selena, La Sombra Elida Reyna Y Avante, Los Palominos, Gary Hobbs, David Lee Garza Y Los Musicales, Shelly Lares, Grupo Limite, Jay Perez, and Mazz. Other categories consist of Progressive, Pop and Urban Tejano music. All of these categories are classified as Tejano.

With the keyboard, drum and the bajo sexto, Tejanos now had a sound they could begin to call their own. In the 1940s, Valerio Longoria introduced lyrics to conjunto music, further establishing the tejano claim to this new sound. Tejano music did retain some of its roots in the old European styles. Polkas and waltzes were still popular, and also popular was the German habit of dancing in a circle around the dance floor. It can also be noted that country & western is also danced in the same manner, but only in Texas.

In the 1950s, Isidiro Lopez further revolutionized the Tejano sound by emphasizing less on the traditional Spanish that Valerio used and using the new Tex-Mex instead. This created a newer sound and took us one step close to the sound we have today. In the 1960s and '70s Little Joe and the Latinairs, later renamed La Familia, The Latin Breed, and others infused the orchestra sound into the Tejano sound, taking their influences from the Pop, R&B and other forms of music. In the late 70s and early 80s, there was a new sound emerging with up-and-coming groups like McAllen's Espejismo, led by songwriter/lead singer Rudy Valdez, and Brownsville natives Joe Lopez, Jimmy Gonzalez y El Grupo Mazz introduced the keyboard sound to Tejano which was influenced by the disco sound of the era. During that period, La Mafia became the first Tejano band to put on rock-style shows for their generation.

In the last few years or so there has been an increasing Mexican influence on Tejano music resulting in a sound more like Norteño. The accordion, while a historically popular instrument in Tejano music, has gone from a secondary or specialty instrument to a "must have" instrument. Today, groups like Jaime Y Los Chamacos, Albert Zamora Y Talento Sunny Sauceda, Eddie Gonzalez, and La Tropa F emphasize the accordion.

At the turn of the 21st century, Tejano influence has declined in part due to decreased promotion, the rise in regional Mexican and other Latin music, the breakup or retirement of established performers, and the emergence of few new performers. Most Tejano artists who performed throughout the 1990s during the music's peak who are still performing today have rarely played to the same wide attention in recent years. Regardless, today's Tejano music, while far more pop-oriented than its Depression-era roots, is still a vital regional musical style in several Tejano communities as well as in other parts of the United States.

Tejano and Conjunto music is so popular that organizations such as the Guadalupe Arts Center in San Antonio, Texas holds annual festivals every Spring. The performers have included legends such as Flaco Jimenez and Tony DeLaRosa (who is deceased), and conjunto groups from around the world, and contemporary artists.

Some of the notable artists and bands in the genre are: