Thalita de Jong (born 6 November 1993) is a Dutch racing cyclist.[1] She competed in the 2013 UCI women's team time trial in Florence.[2] She won gold at the 2016 UCI Cyclo-cross World Championships in Zolder, Belgium.[3] After five years with Rabo–Liv, in August 2016 Lares–Waowdeals announced that de Jong would join them for the 2017 season, leading the team on the road and in cyclo-cross.[4] She is the older sister of fellow professional cyclist, Demi de Jong. 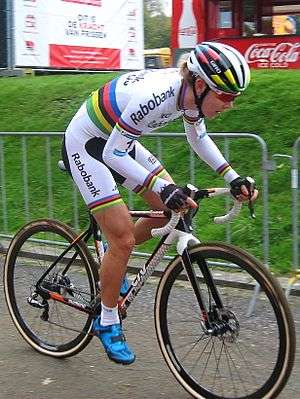 de Jong in the rainbow jersey signifying she is the current World Champion.