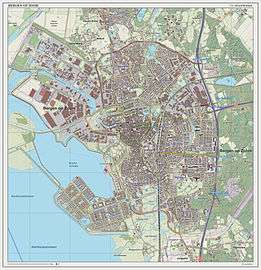 Bergen op Zoom (Dutch pronunciation: [ˈbɛrɣə(n) ɔp ˈsoːm];[5] called Berrege [ˈbɛrəɣə] in the local dialect) is a municipality and a city located in the south of the Netherlands.

The city was built on a place where two types of soil meet: sandy soil and marine clay. The sandy soil pushed against the marine clay, accumulating and forming hills over several centuries. People called those hills the Brabantse Wal, literally meaning "wall of Brabant". Zoom refers to the border of this wall and bergen in Dutch means mountains or hills. The name has nothing to do with the little channel the ‘Zoom’ which was later built through Bergen op Zoom. 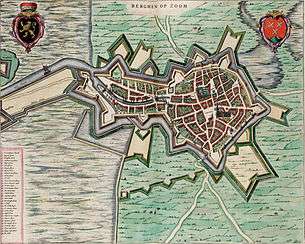 Bergen op Zoom was granted city status probably in 1212. In 1287 the city and its surroundings became a lordship as it was separated from the lordship of Breda. The lordship was elevated to a margraviate in 1559. Several families ruled Bergen op Zoom in succession until 1795, although the title was only nominal since at least the seventeenth century.

During the early modern period, Bergen op Zoom was a very strong fortress and one of the main armories and arsenals of the United Provinces. It had a remarkable natural defensive site, surrounded as it was by marshes and easily floodable polders. Furthermore, it could receive reinforcements and supplies by sea, if the besieging army did not have a fleet to blockade its port.

Due to these features, the city was one of the strategic points held by the Dutch during their revolt in the Eighty Years War. It was at that time besieged by Alessandro Farnese first in 1588, and by Ambrosio Spinola a second time in 1622. Both sieges were unsuccessful and Bergen op Zoom got the nickname La Pucelle or The Virgin as it was never sieged successfully.

In 1747, during the War of the Austrian Succession, the French army laid siege to it again. At that time, Bergen op Zoom had fortifications built in the beginning of the 17th Century by Menno van Coehoorn, with three forts surrounding the city and a canalized diversion of the Scheldt acting as a ditch around its walls. However, it had no second line of fortifications, nor any fortress. After seventy days of siege, the city was taken and thoroughly sacked; the garrison was slaughtered.

During the War of the Seventh Coalition, the town was again besieged by the British in 1814 in a failed attempt to dislodge the French garrison.

During the reign of Jan II van Glymes (1417–1494), nicknamed "Jan metten Lippen", which means "Jan with the big lips", probably caused by an infection, a surge in economic growth occurred. Large fairs were held twice a year, in spring and fall, that were known both nationally and internationally. Merchants from all over Europe came to Bergen op Zoom to sell their goods.

Because of this major economic growth, the Sint-Gertrudischurch was enlarged. The enlargement was called the Nieuw Werck but was never finished, because of the economic recession of the mid 16th century and it became a ruin. The economic recession was largely caused by the bad accessibility of the port, due to a number of floods in Zeeland and West-Brabant. Because of the great reliance on the port, the economic growth received a major blow. In addition, the modernization of trade techniques, like the permanent stock exchange instead of the fairs, which took place twice a year, also damaged the local economy.

Nevertheless, these fairs existed until 1910. Despite the disappearance of the two big fairs, Bergen op Zoom still hosts all kinds of smaller fairs and events.

During the Eighty Years' War, Bergen op Zoom chose the side of republic, and, simultaneously, for Protestantism. The Catholics of the city either adapted themselves or moved to the surrounding countryside, which largely remained Catholic. The inhabitants who chose to stay Catholic, went to church in secret barns and houses, since the Sint-Getrudischurch was appointed to the Protestant community.

In 1832, a Catholic parish, the ‘Heilige Maagd ten Ophemeling’, was allowed to have its own church. In the same period, a synagogue for the Jewish community in Bergen op Zoom and surroundings was built. In 1972, the Protestant community, after the loss of many members, gave the Sint-Getrudischurch to the Catholic parish. Since the restoration of the Church, Catholic services have been held again.

The city of Bergen op Zoom 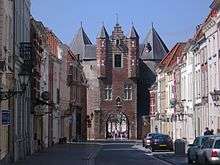 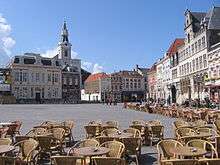 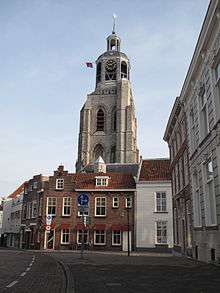 The Markiezenhof Palace, built in the fifteenth and sixteenth centuries, houses a cultural centre and a museum with a picturesque courtyard, paintings, period rooms, and temporary exhibitions.

Another major plant/employer in the city was Philip Morris until its close-down in 2014.[7]

Bergen op Zoom has housed many artists. Some of them are, in chronological order:

See also: List of twin towns and sister cities in The Netherlands

Bergen op Zoom is twinned with: