The UCI awards a gold medal and a rainbow jersey to the winner. Silver and bronze medals are awarded to the second and third place contestants. World champions wear their rainbow jersey until the following year's championship, but they may wear it only in the type of event in which they won it. 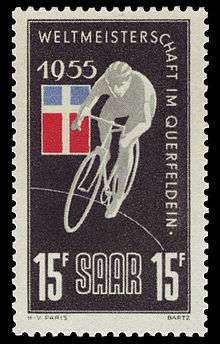 First held in 1950[1] it replaced the Critérium International de Cyclo-cross (French for International Cyclo-cross Criterium) which, as the first international cyclo-cross race, was considered the unofficial world championship. It has since been held annually and is traditionally disputed at the end of January or the beginning of February. At first there was only the event for elite men. Events for junior and under 23 men were added in 1979 and 1996 respectively; women's events were added for the elites and under 23s in 2000 and 2016 respectively. Beyond these, there also was an event for amateurs from 1967 till 1993.[2]

Cyclo-cross being mostly centred in Europe has made it take quite a while for the world championships to be held in another continent. This finally changed with the 2013 edition which took place in Louisville, Kentucky, United States.