Consideration was given in 1975 to establishing an independent heraldic authority in New Zealand. In particular there were proposals for a new provincial king of arms, titled New Zealand King of Arms, to be under the Earl Marshal and Garter Principal King of Arms. This would have been an officer of arms in ordinary and a part of the corporation of the College of Arms. It was decided however to continue to use the College of Arms.

Since the creation of the office of New Zealand Herald of Arms Extraordinary in 1978, letters patent issued through by the College of Arms to New Zealanders have de-emphasised their English character. Thus, the Earl Marshal is simply noted as "Earl Marshal" rather than "Earl Marshal and Hereditary Marshal of England". In the same way, the Queen's New Zealand royal style has been used rather than that of the United Kingdom. 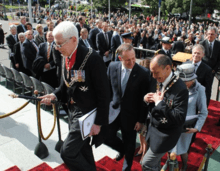 When performing duties the New Zealand Herald of Arms Extraordinary wears morning dress together with the chains of office and holding a herald's baton. The tabard of the Royal Arms are only worn at ceremonial occasions when in England together with the other heralds; the most recent occasion being at the Thames Diamond Jubilee Pageant in 2012.

The badge of office of New Zealand Herald of Arms Extraordinary is blazoned A complex Māori Koru coloured in the traditional manner proper ensigned by a representation of the Royal Crown also proper. The Koru design is used to decorate the rafters of Māori meeting houses, where important ceremonies take place, and it is also found on a number of objects at these ceremonial gatherings. The loops and coils of the Koru also represent the complex Māori genealogical tree of the Whakapapa. Māori genealogy is based for the most part on oral evidence and tradition, and in art the Koru is used to represent this.

Phillippe (Phillip) Patrick O’Shea CNZM CVO (born 23 March 1947 in Wellington). He was educated at St. Patrick's College, Wellington and Victoria University of Wellington. He was Librarian and numismatic advisor to Treasury from 1967–74, Advisory Officer (Honours) to the Department of Prime Minister and Cabinet from 1974, and New Zealand Herald of Arms Extraordinary to the Queen from 1978. In the 2014 New Year Honours O'Shea was appointed a Commander of The Royal Victorian Order.[6][7][8]