The Pearl-Qatar (Arabic: اللؤلؤة قطر‎‎) in Doha, Qatar, is an artificial island spanning nearly four million square metres. It is the first land in Qatar to be available for freehold ownership by foreign nationals.[1] As of January 2015, there are 12,000 residents.[2]

Once fully completed, The Pearl will create over 32 kilometres of new coastline, for use as a residential estate with an expected 18,831 dwellings and 45,000 residents by 2018.[2] Developed by United Development Company and planned by architecture and design firm Callison, the island is located 350 metres offshore of Doha's West Bay Lagoon area.

In 2004, when the project was first revealed, the initial cost of constructing the island stood at $2.5 billion.[3] It is now believed the project will cost $15 billion upon completion.[4][5]

The name "The Pearl" was chosen because the island is being built on one of Qatar's previous major pearl diving sites. Qatar was one of the major pearl traders of Asia before the Japanese introduced cheaper more affordable pearls just before Qatar's oil boom. The Pearl Qatar will help represent Qatar's rich past in the pearl industry. Once completed The Pearl will resemble a string of pearls. 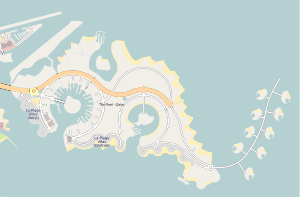 The Pearl Qatar, when completed.

Residential development on the island is intended to incorporate various national and international themes, including aspects of Arabic, Mediterranean, and European culture. There are ten precincts that make up The Pearl-Qatar Island.

Total number of towers will be 31 with a total of 4,700 apartments.[6] The address format is Unit 1234, 1 Porto Arabia. Some references use PA‑1 for convenience.

There will be 29 towers total. The address format is Unit 1234, 1 Viva Bahriya, with VB‑1 being the shorter, convenient version.

The Pearl Qatar's "Venice-like community" has an extensive canal system, pedestrian-friendly squares and plazas and beachfront townhouses. The first residents started to live in Qanat Quartier in 2012.[39] When complete there will be:[40]

This precinct is located by the entrance of The Pearl Qatar, and will have 7 towers[42] including the tallest buildings planned for the development, at 40 storeys high.[43]

There will be more than 13 islands when construction is completed. The largest of the islands will feature a range of luxury villas, apartments, three five-star hotels and over two million square meters of international retail, restaurants, cafes, and entertainment facilities. Eight other private islands will be for sale to private owners with the opportunity to build upon them whatever they wish.

The Pearl-Qatar is home to a wide selection of dining outlets covering the full range of cuisines from South American to French/Lebanese through to casual options such as Alison Nelson's Coffee Bar. Time Out Doha Awards 2012: Midori, the Japanese restaurant in Porto Arabia, took out Best Newcomer in the awards. Pampano, also operated by Hospitality Development Company (HDC), a fully owned subsidiary of United Development Company (UDC), the master developer of The Pearl-Qatar, received the "Highly Commended" certificate in the Best South American category.[45]

The Pearl Qatar is also home to a number of cafés, lounges, bakeries and confectioneries: 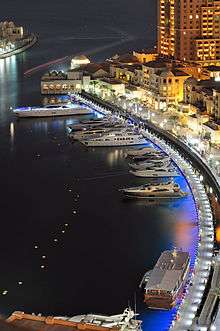 Boats at the Pearl

The island is home to many renowned luxury brands.

Nikki Beach Resort and Spa will be located at the end of Porto Arabia. The original completion date was scheduled for July 2012, but construction was stopped due to an alcohol ban. As of December 2013 no progress had been made.