Häagen-Dazs /ˈhɑːɡəndɑːs/ is an ice cream brand, established by Reuben and Rose Mattus in the Bronx, New York, in 1961. Starting with only three flavors: vanilla, chocolate, and coffee, the company opened its first retail store in Brooklyn, New York, on November 15, 1976.[1] The business now has franchises throughout the United States and many other countries around the world including the United Kingdom, India, Pakistan, China and Brazil.[2]

Häagen-Dazs ice cream holds the distinction of being one of the few commercial ice cream brands not to use stabilizers such as guar gum, xanthan gum, or carrageenan. They do use corn syrup in many of their flavors, such as the Vanilla Swiss Almond, according to their website. The company also produces ice cream bars, ice cream cakes, sorbet, frozen yogurt, and gelato.[3] 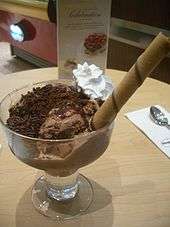 Reuben Mattus invented the "Danish-sounding" "Häagen-Dazs" as a tribute to Denmark's exemplary treatment of its Jews during the Second World War,[4] and included an outline map of Denmark on early labels. The name is not Danish, which has neither an umlaut ä (rather, the ligature æ is the corresponding counterpart) nor a digraph zs, nor did the name have any meaning in any language before its creation.[5] Mattus felt that Denmark was known for its dairy products and had a positive image in the United States.[6] His daughter Doris Hurley reported in the 1999 PBS documentary An Ice Cream Show that her father sat at the kitchen table for hours saying nonsensical words until he came up with a combination he liked. The reason he chose this method was so that the name would be unique and original.[7]

In 1980, Häagen-Dazs unsuccessfully sued Frusen Glädjé, an American ice cream maker founded that year, for using similar foreign branding strategies. The phrase frusen glädje—without the acute accent—is Swedish for "frozen delight".[8] In 1985, Frusen Glädjé was sold to Kraft General Foods. A Kraft spokeswoman stated that Kraft sold its Frusen Glädjé license to the Unilever corporation in 1993, but a spokesman for Unilever claimed that Frusen Glädjé was not part of the deal.[9] The brand has since disappeared.

Häagen-Dazs ice cream comes in several traditional flavors as well as several esoteric flavors that are specific to the brand, such as Vanilla Swiss Almond and Bananas Foster. It is marketed as a "super-premium" brand: it is quite dense (very little air is mixed in during manufacture), uses no emulsifiers or stabilizers other than egg yolks, and has a high butterfat content. Häagen-Dazs consumers are also directed to store their ice cream at 0 °F (−18 °C), a temperature substantially lower than that used for most ice creams, in order to keep its intended firmness.[10] It is sold both in grocery stores and in dedicated retail outlets serving ice cream cones, sundaes, and so on.

Most of the world's Haagen-Dazs products manufactured in France. In the United States and Canada, Haagen-Dazs brand licensing by Nestle. Haagen Dazs in Japan is licensing by Suntory and Takara investment dairy joint venture production. 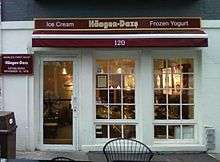 Häagen-Dazs's founder Reuben Mattus was born in Poland in 1912 to Jewish parents. His father died during the First World War, and his widowed mother emigrated to New York City with her two children in 1921.[11] They joined an uncle who was in the Italian lemon-ice business in Brooklyn. By the late 1920s, the family began making ice pops, and by 1929, chocolate-covered ice cream bars and sandwiches under the name Senator Frozen Products on Southern Boulevard in the South Bronx, delivering them with a horse-drawn wagon to neighborhood stores in the Bronx.[4][5]

Mattus met Rose Vesel, who had arrived in New York with her Polish-Jewish parents from England at age five, in Brownsville, Brooklyn. After finishing high school, Vesel went to work as a bookkeeper at the Senator plant in 1934, and the two married in 1936.[12]

Häagen-Dazs' store in Santiago, Dominican Republic, next to Chili's.

The Senator Frozen Products company was profitable, but by the 1950s the large mass-producers of ice cream started a price war that Mattus could not fight, leading to his decision to make a heavy kind of high-end ice cream. In 1959, he decided to form a new ice cream company with what he thought to be a Danish-sounding name, Häagen-Dazs,[4] a move known in the marketing industry as foreign branding.

In 2009, a sign that appeared to invite only foreigners to a newly opened Häagen-Dazs in New Delhi, India, led to complaints. The Indian subsidiary removed it and apologized.[20][21]