Thirumalai Nayak (well known as - Thirumalai Nayakkar) ruled Madurai between A.D 1623 and 1659. He was the most notable of the thirteen Madurai Nayak rulers in the 17th century. His contributions are found in the many splendid buildings and temples of Madurai. His kingdom was under constant threat from the armies of Bijapur Sultanate and the other neighbouring Muslim kingdoms, which he managed to repulse successfully. His territories comprised much of the old Pandya territories which included Coimbatore, Tirunelveli, Madurai districts, Aragalur in southern Tamil Nadu and some territories of the Travancore kingdom.

Thirumalai Nayak succeeded his brother Muttu Virappa Nayak on the Madurai there in A.D 1623. The political situation in south Tamil Nadu was confused with the decline of the Vijayanagar empire, and the once feudatory Nayak governors of Madurai, Thanjavur, Gingee and Mysore were quarrelling to divide the dissolving Vijayanagara Empire. The Muslim kingdoms in the Deccan began to press southwards. Immediately after becoming king, Thirumalai Nayak withheld the payment of tributes to the Vijayanargara kings. He also gathered a large army in Thiruchirapalli and strengthened its fortifications.

Invasion by the Bijapur army

Around 1638, the Vijayanagara King Ranga, succeeded to the throne of Chandragiri and he soon resolved to put an end to the independence of Thirumalai and prepared to march southwards. Thirumalai had meanwhile persuaded the Vijayanagar governors of Tanjore and Gingee (in south Arcot) to join him in his defiance of their mutual suzerain, and thus Ranga was left with only Mysore, of all his feudatories, to support him. The Nayak governor of Thanjavur eventually left his allies, sent in his submission, and betrayed the other Nayaks.

Ranga advanced upon Gingee Fort and laid siege to it. Thirumalai requested the Bijapur Sultan to send assistance. However the Bijapur troops defeated the Vijayanaraga army and turned on the Nayak armies by attacking the Gingee fort themselves. Gingee soon fell to the Bijapur troops. Thirumalai retreated in dismay of Madurai, and the Bijapur army advanced southwards, defeated the Thanjavur Nayak, and proceeded to lay waste the Madurai country. Thirumalai then submitted, apparently without striking a blow, paid a large ransom to the invaders, and agreed to send an annual tribute to the Sultan of Bijapur.

The Vijayanagar ruler had taken refuge with the king of Mysore, and then, these two monarchs combined to endeavor to recover those portions of the Vijayanagara territories, which had recently been captured by Golconda. Thirumalai, making use of the opportunity to settle a long-standing quarrel with the kingdom of Mysore, persuaded the Sultans of Golconda and Bijapur to help him attack Mysore from the south. The Sultan of Golconda accepted and attacked Mysore and extinguished the Vijayanagara Empire and humbled the kingdom of Mysore. In return Thirumalai Nayak the Thanjavur Nayak and paid large amounts as tribute to the Golconda Sultan.

Thirumalai had another conflict with Mysore towards the end of his reign. The battles began with the invasion of Coimbatore by the Mysore king apparently in revenge for Thirumalai’s contribution to his defeat at the hands of the Golconda Sultanate. Coimbatore was occupied by the Mysore armies with ease, and Madurai itself was threatened. The Mysore troops were however repulsed from the town by the assistance of the Setupati of Ramnad. This campaign was known as the ‘hunt for noses’ because under the orders of the Mysore king, the invaders cut off the noses of all their prisoners and sent them in sacks to Seringapatam as trophies.[2]

A counter invasion of Mysore was undertaken shortly afterwards by Thirumalai under the command of Kumara Muttu Nayak, his younger brother, and was a success, in which the king of Mysore himself was captured and his nose was cut off and sent to Madurai.{[3]

During Thirumalai's reign, two rebellions occurred amongst his feudatories. The first was by the Setupati of Ramnad. It was due to an order of Thirumalai in 1635 regarding the succession to the chief of that territory, which was resisted by the rightful claimant. Thirumalai was successful in placing his nominee on the throne and in imprisoning the rival aspirant, but he was ultimately compelled to allow the latter to succeed. His heir reciprocated this action by supporting Thirumalai in his final war with Mysore.

The other rebellion was caused by a confederacy of Poligars headed by the powerful chief of Ettaiyapuram in the Tirunelveli district. The reason for this upraising is not clear. The Setupati of Ramnad, as chief of all the Poligars, quelled it. The leader of the rebels was put to death and the others punished. 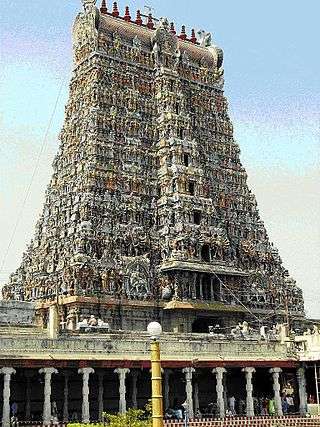 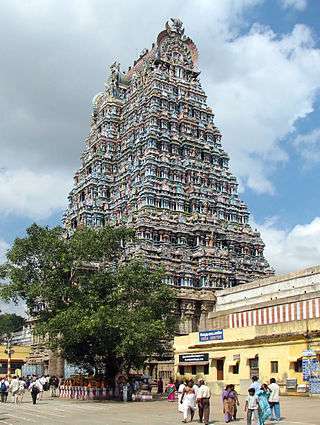 Thirumalai’s capital was Madurai. The royal residence had been moved from there to Thiruchirapalli by his predecessor, but Thirumalai moved it back to Madurai again. The reason for this move is claimed to be due to a dream Thirumalai had but also stated by historians that Madurai has a long history and continuously civilized through ages and thiruchirapalli is at a threat of immediate attack by mysore.[4] 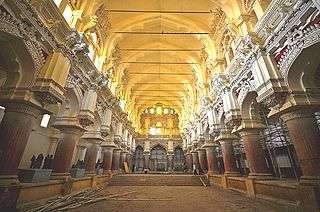 Thirumalai is best remembered for the many splendid public buildings he built in Madurai. Despite so many upheavals, Thirumalai Nayak's reign is famous for the legacy he left behind in numerous constructions. He added a tower to the Meenakshi temple, the unfinished tower called the Raja Gopuram and added a hall. He is credited for excavating the huge artificial pond, or Teppakulam. 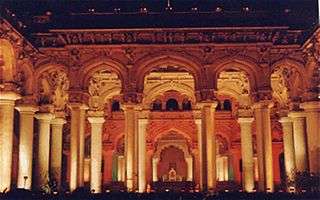 He also built the beautiful palace called Thirumalai Nayak Mahal a.k.a. Thirumalai Nayak Palace. The palace was divided into two major parts, namely Swargavilasa and Rangavilasa. The royal residence, theatre, shrine, apartments, armoury, palanquin place, royal bandstand, quarters, pond and garden were situated in these two portions. The courtyard and the dancing hall are the major centres of attraction of the palace.

He is also credited with building the Perumal temple at Tallakulam,Madurai. 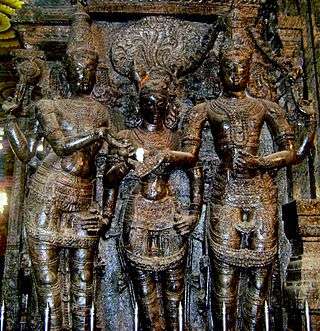 Lord Vishnu Hands over his Sister to Lord Siva

Thirumalaii Nayak took great personal interest in the erection of the Pudumandapa at the Madurai temple. There are some account which recount that on one occasion, Sumandramurti Achari, the principal architect, was so deeply engrossed in sculpting a relief of the stone elephant eating sugarcane, an incident in the temple's puranic history, that he did not notice the Nayak standing by him. The Nayak rolled some betel leaves and areca nuts and handed them to him. Thinking that it was an assistant who had done so, he took them and began to chew them without looking around. When he realised that it was the Nayak himself, he was so much affected that he damaged the two fingers of his that had taken the betel leaves. Moved by his devotion to duty, the Nayak gave him many gifts.

On another occasion a son of an artist pestered him for a mango when that fruit was not in season. He would not take no for an answer. The Nayak ordered that gold mangoes be brought from the palace. The boy was content and allowed his father to continue the work undisturbed. From this incident the family came to be called the "Mampazham" family.

When, on yet another occasion, an artist was making a sculpture of a consort of the Nayak's and a chip broke off from the thigh. By curious coincidence, the queen actually had a scar in the same place as the chip. The artist started work on another image, but a chip again appeared at the same place. A minister of the Nayak advised the artist to finish the statue with the chip. When the Nayak saw the image, he was angry, wondering how the minister knew that his queen had a scar on her thigh. He sent for him. The minister knew that the Nayak was angry and might punish him. So he put out his eyes. At this the Nayak was filled with remorse. Thereupon the minister composed a poem in the praise of the Goddess, beseeching her to give him back his eyesight if he was innocent. She restored it. The minister was a famous Sanskrit poet,named Neelakanta Dikshitar. Among his works are the "Shivalilarnava", on the traditions of Lord Shiva in Madurai, and the "Gangavatarana", on the descent of the Ganga to the earth. After this incident the minister took leave of the King and was endowed with a village called Palamadai (Neelakanta Samudram) East of present-day Sankarnagar, in Tirunelveli. Sri. Nilakanta Diksihthar was the grand nephew of Appayya Dikshita and this family clan has a rich tradition of intellectuals.

Thirumalai Nayak eat his breakfast only after the pujas were performed at Srivilliputhur Andal Temple To get the information that the pujas were completed, the king built mandaps about every five kilometres on the route from Madurai to Srivilliputhur and installed loud bells in them. Each mandap also had a small kitchen.when there was a message to be sent a series of bells rang.[5] 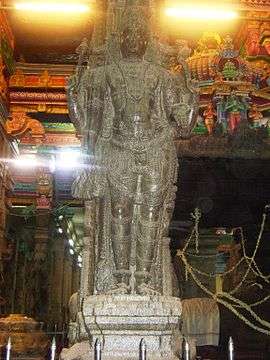 Another anecdote tells us that Thirumalai first brought his queen to the Thirumalai Nayak palace after it was completed. She commented that the giant pillars and arches reminded her of a stable for elephants, sending the king into such a rage that he had her confined for the rest of her life. And he took another wife.

“Almost every day he appears on the terrace surrounded by his courtiers, while in front of them his elephants are drawn up in two rows, the space between them being occupied by three or four hundred Turks (Turcos) who form his bodyguard. When he comes out of the fortress to visit some pagodes (Temple), as he is wonts to do on days of festivals, he is surrounded with great pomp. Sometimes he rides in a palanquin, at other times he mounts an enormous elephant…Next come the elephants in a long file, mounted by his nobles and chief captains, preceded by the arms and insignia(crest) of the Nāyaka.Then the cavalry and the rest of the troops follow".

Thirumalai Naik died in 1659. He was between sixty-five and seventy years of age at the time and had reigned for thirty-six years. His territories at his death comprised the present districts of Madurai (including the territories of Ramnad and Sivaganga), Thirunelveli, Coimbatore, Salem and Thiruchirapalli, with Pudukkotai and parts of Travancore. According to legends that numerous stories surrounding his death .