Rani Mangammal (died 1705) was a queen regent on behalf of her grandson, in the Madurai Nayak kingdom in present-day Madurai, India, in 1689—1704. She was a popular administrator and is still widely remembered as a maker of roads and avenues, and a builder of temples, tanks and choultries with many of her public works still in use. She is also known for her diplomatic and political skills and successful military campaigns. The capital of Madurai Kingdom during her times was Tiruchy.

Mangammal was the daughter of Tupakula Lingama Nayaka, a general of Madurai ruler Chokkanatha Nayak (1659–1682). Although Chokkanatha married Mangammal early, she became the principal queen only later on after his efforts to wed the daughter of the Thanjavur ruler Vijayaraghava Nayaka had failed. Chokkanatha died in 1682, after that she took over the crown.

Rangakrishna Muthu Virappa Nayak (1682—1689), Mangammal’s son succeeded Chokkanatha, aged fifteen. He tried to retrieve the diminished fortunes of the kingdom and made a name for himself by courageously ignoring Aurangzeb. But Rengakrishna died in 1689, when his queen was pregnant. After she gave birth to a son, Vijaya Ranga Chokkanatha, she committed sati, despite strong remonstrance by her mother-in-law Mangammal. So Mangammal was forced to become regent on behalf of her infant grandson Vijaya Ranga Chokkanatha, who was crowned when he was three months old in 1689 and ruled till 1705, with an able administrative council headed by Dalavoy (Governor General) Narasappiah.

Mangammal was less often at war than her predecessors had been, but she did not escape the usual conflicts with her neighbors. The Madurai kingdom had enemies all-around; the Marathas, Mysore army, Mughal army with the Deccan Sultans and frequent interludes by the Thanjavur kingdom. In the south, the Raja of Travancore stopped paying the tribute and the ruler of Ramnad, Kilavan Sethupathi had risen in revolt in a bid for independence. Mangammal had to face these state of affairs without any external help. With her political wisdom, diplomatic skill, administrative ability, and cool courage in the face of danger, she was able to maintain the prestige of Madurai and regain for it much of the position it had held during the days of Thirumalai Nayak.

Mangammal’s reign also synchronized with a period when the Mughal Emperor under Aurangzeb was the master of Deccan.It was only during her reign Madurai first came into direct contact with the Mughal Empire at Delhi. Zulfikar Khan, the general sent by Mughal emperor Aurangzeb to attack the Maratha stronghold at Gingee, exacted tribute both from Trichinopoly and Thanjavur in 1693, though he did not succeed in taking Gingee until five years later.

The first problem which Mangammal had to face was the threat from the Mughals. Aurangzeb sent an army to the south to demand submission from Thanjavur and to seize Gingee Fort, which had gone into the hands of the Marathas during the time of her husband. In 1697, Zulfikhar Ali Khan, the general of Aurangzeb was engaged in the Siege of Jinji, where Rajaram, son of Shivaji had entrenched himself and bent upon attacking Thanjavur and Madurai at any cost.

After careful deliberation, Mangammal sent tribute, and later with the help of Zulfikhar Ali she was able to recover some portions of the kingdom lost to Thanjavur in the past. Mangammal also had to face an invasion of Tiruchirapalli by Chikka Deva Raya of Mysore who sent his famous Dalavoy Kumariyya, but an attack by the Marathas on Mysore led to his recall.

In 1697, Mangammal sent an expedition to Venad to punish its ruler, Ravi Varma, who had attacked and destroyed an army sent from Madurai to Venad to collect the annual tribute which the king had not been paying. The ruler of that country had of recent years been very remiss in sending his tribute to Madurai, and it had been necessary on several occasions to send an army to collect the arrears. The force dispatched for this purpose was taken off its guard and almost cut to pieces. A punitive expedition was organized in the following year, and after hard fighting Venad was subdued and an immense booty was brought home. Part of this consisted of many cannons, which were mounted, on the ramparts of Tiruchirapalli and Madurai.

Mangammal had frequent troubles from the time of her regency with Maratha King Shaji of Thanjavur. In the following year the Madurai forces under Dalavoy Narasappiah crushingly defeated the Tanjore Marathas near their capital, when they suddenly stormed into their capital. The disheartened King Shaji of Tanjore was only glad enough to buy off the invading army with an enormous bribe, after almost emptying his treasury.

When Rani Mangammal was engaged in settling her policy towards the Mughal Empire, Chikka Deva Raya of Mysore in a pursuit of territorial expansion annexed the territories up to Salem and Coimbatore from Madurai Kingdom between 1690 and 1694. In 1695, Tiruchirapalli, then capital of Madurai, was also besieged by Mysore armies was defeated and sent back.

Shortly after her war and peace with Thanjavur in 1700, both united and proceeded against Chikka Dev Raya. The later had built an Anicut (which means "dam" in Tamil) across the river Cauvery thus preventing adequate supply of irrigation water for Thanjavur and the northern parts of Madurai Kingdom. Same year, the river also ran near dry. Anticipating a drought and famine situation, both Madurai and Thanjavur armies united to attack Mysore. But by that time, heavy rains had washed off this Anicut, which was located at the site where the present Kannambadi dam stands.

Mangammal's greatest trial and serious failure was her expedition against Raghunatha Sethupathi, which was also her last major campaign in 1702. The war was against the Sethupathi for his support to Thanjavur during her early days. This ended in a defeat for the Madurai culminating with the death of Madurai’s famous Dalavoy Narasappiah in the battle. This was a serious blow to Rani Mangammal for otherwise successful military campaigns.

Mangammal was an efficient and popular ruler and her memory is cherished even today in the rural areas of the district. Mangammal worked industriously at civil administration, trade and industry paying special attention to irrigation and communications.

Many irrigation channels were repaired, new roads were constructed, and avenue trees were planted. The highway from Cape Comorin was originally built during the time of Mangammal and it was known as Mangammal Salai.[1] She built many public works, notably the Choultries for pilgrims, of which the Mangammal Chataram [2] (Choultry) in Madurai near the railway station is a standing monument. Popular belief ascribes to her every fine old avenue constructed in Madurai and Tirunelveli and other smaller towns in Tamil Nadu.

Her own original palace (Tamukkam or Summer Palace) in Madurai now houses the Mahatma Gandhi Museum although modified several times. The Palace has Tamukku Maidanam (Grounds), capable of hosting royal entertainments such as elephant fights. She also provided comfort to highway travelers and pedestrians by planting trees, building inns and supplies of water. In 1701 she made large grants for a public feeding institute. 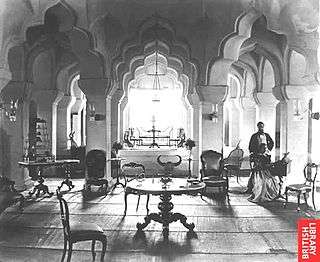 Mangammal was Hindu but nevertheless she was tolerant of other religions. She endowed both temples and mosques, and she was friendly with Christian missionaries and their converts. In 1701, she made village grants to a Dargah in Tiruchirapalli. Christian Missionaries enjoyed greater freedom in carrying out their works.

Mangammal donated considerable jewels, palanquins to the Madurai Meenakshiamman Temple and similar endowments to numerous temples in her Kingdom.

Rani Mangammal instituted the famous Unjal (swing) festival in the temple of Meenakshi to be performed in the Tamil month of Ani. Her contemporary portrait may be seen in the Unjal Mandapam. On all celebrations, the royal sceptre (sengoal) used to be placed before the Meenakshi deity and then placed on the throne for the whole day. A painting in the Meenakshi Amman Temple shows the temple priest handing over the royal sceptre to the Queen. It may also be mentioned that Hindu kings ruled their kingdoms as the servants of God. The land was ruled in the name of the presiding God of the country.

Mangammal’s death (circa 1705) is shrouded in mystery. Managammal’s grandson Vijaya Ranga Chokkanatha Nayak came of age in 1704—1705. But she is the most remembered of all Nayak rulers by the people of Tamil Nadu even more than Thirumalai Nayak for her administrative works which still exists in various parts of her former kingdom. The belief was that women were not suited to succeed to the throne of a kingdom, so Mangammal shines almost alone as an able and powerful female ruler in Tamil Nadu.