Cheyyar is a town in the Tiruvannamalai District in the Tamil Nadu state of South India. The most common name of this town is Cheyyar but it is also referred to as Thiruvetipuram in many government records. It gets its name Cheyyar River as the town initially was developed on the river beds of cheyyaru. As of 2011, the town had a population of 37,802.

The town is situated at 30 km from Kanchipuram, 90 km from Thiruvannamalai, 34 km from Arani and 100 km from Chennai,60 km from Vellore,32 km from Arcot,As well connected by buses on SH 5 and SH 45. The town contains an ancient temple called Vedapureeswarar Temple situated on the banks of the river,[1] and there is a legend that Thirugnana Sambandar, one of the four great saivite saints visited the temple and caused a male palm tree to flower by singing verses in Tamil. There is another famous ancient temple called Patcheeswarar temple built during the Pallava's rule in the very heart of the town. The town was in the North Arcot District (part of Vellore district) until Tiruvannamalai district was formed. It has a sub collector office and is the third largest town in the district after Thiruvannamalai and Arani. This town has a Government Arts College, dating from the early 1970s. The chief occupations of the people are agriculture and handlooming.

Cheyyar is located at 12.6580°N 79.5424°E on the banks of Cheyyar River in the north eastern corner of Thiruvannamalai district of Tamil Nadu. It is 100 km southwest of Chennai the state capital.

The ancient name for Cheyyaru river is Sei Aaru (Child river) meaning that the river is created for a child to play. History says that Goddess Parvathi (Balakusalambigai or Ilamulainayagi) made a line on the earth's surface with her Trisul to make a river for her son, Lord Muruga to play. 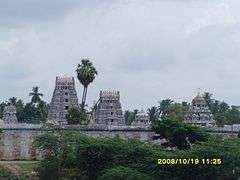 Vedapureeswarar Temple as seen from the Cheyyar river bridge

The temple is devoted to Lord Vedapuresswarar who came here and imparted his spiritual knowledge regarding the Vedas. According to legend in this sacred place Saint Thirugnana Sambanthar used his holy miraculous powers and transformed a male palm tree into a female palm tree. Palmyra Palm tree is the thala virutcham (holy tree) of this temple. This is the 8th of the 32 Devara Stalams in the Thondaimandalam region of South India. Although this temple had been founded earlier, inscriptions primarily from the middle and later Chola periods (11th -13th centuries) indicate expansion of temple during Chola time. Arunagirinathar, a devotee of Lord Muruga worshiped and wrote Tamil song on the God of this temple. The temple has some unique distinctions compared to other Siva temples. The Nandi, which usually faces the Siva lingam, is facing the main gate. Also, one can worship all the Pancha Bootha lingams in this temple. The devotees of the temple and the natives of the town celebrate a festival every year with street processions which spans 10 days called Brahmmotsavam. There is village called Purisai 11 km from Cheyyar is famous for Shivan Temple, Ellaiamman Temple and Therukoothu. 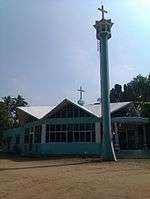 Tiruvettipuram is known for its oldest and biggest government schools and college. The Government Boys Higher Secondary School is the major school having alumni around the world. The school building was opened on August 31, 1931. Arignar Anna Government Arts College was established in 1967 extending over 69 acres (280,000 m2). Arignar Anna Government Arts College was originally affiliated to Madras University. Since the creation of Thiruvalluvar University in 2002, the college stands affiliated to Thiruvalluvar University, Vellore. Wisdom, Indo-American and Murugan educational groups are the major private organizations offering primary to college level education. Some other private colleges are Indo-American college, Wisdom arts&science college,Ramana Maharishi Engineering college.Virutcham International Public School (CBSE & IGCSE) is the next generation School in Cheyyar

Cheyyaru started industrialization following the establishment of the industrial complex by the State Industries Promotion Corporation of Tamil Nadu (SIPCOT).[5] with an allotable field area of 619.35 Acres.[6] Since the investment hot-spots such as Sriperumbudur and Oragadam have become overcrowded, Cheyyaru has become an alternative choice. This is evidenced by the recent announcements of a 250-acre (1.0 km2) hi-tech Special Economic Zone for automotive components, a 300-acre (1.2 km2) electronics hardware park and the commitment from the Taiwanese Shoe Company to set up its unit.[7] One of the largest sugar mills in the country - Cheyyar co-operative sugars - is situated near the town. On Nov, 2009 Tamil Nadu cabinet approved the Mahindara & Mahindra's Rs 1800 core automobile project in 450 acres. This unit will produce tractors, SUVs and commercial vehicles and auto parts.[8] Aluminum die cast unit by Ashley Alteams, a joint venture by Ashok Leyland and Finland-based Alteams Oy started its production on Jan, 2010.[9] This High pressure die cast will manufacture automobile and telecommunication components with initial capacity of 7000 ton per year.[10]