Toledo Zoo is a zoo located in Toledo, Ohio, United States. The zoo began in 1900 as Toledo Zoological Gardens and operated by the City of Toledo's Parks Board. In 1982, ownership was transferred from the city to Toledo Zoological Society, a private non-profit organization, and professionalized the zoo's management. Many of the zoo's original buildings were built by the Works Progress Administration, and are still in use today.

Toledo Zoo is a member of the World Association of Zoos and Aquariums (WAZA) and the Association of Zoos and Aquariums (AZA), and participates in over 30 Species Survival Plans. It is also a member of the Butterfly Conservation Initiative (BFCI). The zoo has also been home to many firsts in the world of zoos; such as the first hippoquarium (and subsequently the first video of a hippo birth),[6][7] as well as being the first place in the world to display the Kihansi spray toad.[8] In 2014, the Toledo Zoo was named USA Today's #1 zoo in America.

Toledo Zoo began in 1900, when a woodchuck was donated to the City of Toledo. In 1918, plans were made to move the Toledo Zoo from Walbridge Park to Ottawa Park, where it would "represent the finest and the third largest zoo in the United States." [9] These plans were never carried out.

The zoo was run by the city until 1982, when management was transferred to the Toledo Zoological Society. It has since added many new exhibits. In June 1986, the Hippoquarium, Phase 1 of the African Savanna, opened; Phase 2 opened the following year, in June 1987.

Because of the success of the Hippoquarium exhibit, the Toledo Zoo was given an opportunity to exhibit two giant pandas on loan from China for the summer of 1988. This was the first year that the zoo had over a million people attend in one year. The exhibit became controversial when the World Wildlife Foundation sued the Toledo Zoo over exhibiting pandas on a short term loan. The zoo was also charging people to see the pandas as a separate exhibit and because of the lawsuit the zoo was ordered to get rid of the fee because it was a part of the regular zoo. The lawsuit was settled out of court and the pandas were exhibited as planned throughout the summer. It is likely that many more people visited the zoo to see the pandas, because of the media attention the zoo gained during the lawsuit.

In 1998, the zoo renovated its Aviary which was originally built around 1930. In 1999, Toledo Zoo received the Association of Zoos and Aquariums' Exhibit Award for Excellence.

In recent years, the zoo built a pedestrian bridge over the Anthony Wayne Trail. Before the bridge was built, people could get into the zoo through an underground tunnel.[1]

Africa! opened on May 1, 2004, and is 12 acres (4.9 ha) large. The main exhibit, the African plains, is 5 acres (2.0 ha) in size. It has artificial termite mounds for the free-roaming African animals, such as the East African crowned cranes, Grant's zebra, greater kudu, helmeted guineafowl, impala, Masai giraffe, Nile lechwe, ostrich, watusi cattle, and wildebeest. There is also a 0.6-acre (2,400 m2) section for African wild dogs. This is all viewed by visitors on an observation deck or the Safari Railway, which circles Africa! Children can ride the only African animal carousel in existence. Africa! was built on the site of the original gravel parking lot that existed before the bridge was built. In March 2010, a male baby giraffe named Enzi was born whose father, Mowgli, is another famous giraffe at the zoo.

It has one of the most diverse collections of any zoo-aquarium in the United States. The aquarium closed in October 2012 for renovations and re-opened in March 2015. The updated aquarium contains 3000+ aquatic animals in 178,000 US gal (670,000 l) of water, including the largest tank with 90,000 US gal (340,000 l). The total water volume is nearly four times as much as the previous aquarium. A new addition is a touch tank containing various stingrays and small sharks. The renovations took two and half years and preserved the exterior of the Works Progress Administration era structure.[10]

The Arctic Encounter includes wolves, gray and harbor seals, and polar bears. Two waterfalls and 7 saltwater streams are featured in this exhibit.[11]

The bald eagle exhibit and rescue is located in the middle of the north side pedestrian ramp to the bridge. The first inhabitants had an injured wing and a blind eye respectively.[14]

Cheetah Valley can be viewed from an observation deck or from the fence located by the Museum of Science. One female from Namibia has had several litters of cubs.[15]

Nature's Neighborhood is located next to the Museum of Science. It contains live animal shows, a treehouse, a forest room, Jumpin' Junction, a workshop and a climbing wall.

Kingdom of the Apes

In 1993, The Kingdom of the Apes first opened. Now, it holds orangutans and western lowland gorillas. The gorillas have a Gorilla Meadow, which has an area of 0.3 acres (1,200 m2). The orangutan exhibit has a pool in the outdoor space and climbing structures.[16] Two chimpanzees, named Fifi and Harvey, used to be on exhibit at the Toledo Zoo. After the death of the chimps from old age, the zoo chose not to continue the chimpanzee exhibit.[17]

The exhibit includes two sub-exhibits, The Crawlspace and Amazing Amphibians. The Crawlspace: A World of Bugs contains over 20 species such as beetles, centipedes, cockroaches, orb-weaver spiders, scorpions, tarantulas, and stick insects.[10]

The Amazing Amphibians exhibit features over two dozen species of frogs, salamanders and caecilians, including the Kihansi spray toad, the Wyoming toad and the Japanese giant salamander. Completed in 2008, the exhibit features a nocturnal area at its entrance and biosecure rooms that enable breeding of certain species.

The Penguin Beach was built in 2014 and features African penguins. This is an outdoor exhibit with a little overhead bridge and an underwater viewing area.

The Lights Before Christmas

Main article: The Lights Before Christmas

The Lights Before Christmas is an annual event held by The Toledo Zoo from November 16 to December 31. Most summer attractions and exhibits are closed, but all the buildings and trees are decorated with Christmas lights. It features over one million Christmas lights, 200 animal images, ice carvings, food, carolers, model trains from the Swanton Area Railroad, and Santa Claus. An 85-foot (26 m) Norway spruce tree contains over 32,000 lights every year, which is more than the Rockefeller Center Christmas tree. The main show, Dancing Lights, is near Cheetah Valley. It is repeated several times every night. It uses LED wide-angle mini lights that flash along with Christmas music.[18] All this is done using nearly 10 miles (16 km) of extension cords.[19]

Winter Weekends is an annual winter-themed event lasting from January through February. It features professional ice carving demonstrations, "Cabin Fever Feeds", musical and theatrical performances in the historic Indoor Theatre, and other special activities. Many of the outdoor animal exhibits are closed during these months, but all of the indoor exhibits remain open to the public. Zoo admission is also half-price during this event.[20] 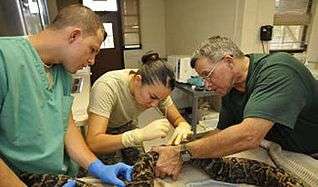 A Cuban boa gets a microchip from Toledo Zoo biologist.

The Zoo has several projects across the world working with wildlife and habitats. Zoo employees run a majority of the research abroad and will participate in expeditions. Some of the most prominent conservation programs are the Aruba island rattle snake program, West Indian boa conservation, the Kihansi spray toad program (which served to restore a wild population that was declared extinct).

The Zoo has a department called Wild Toledo, which focuses on local conservation efforts and scientific research. This conservation department works to re-introduce hellbenders to their native habitat in southeastern Ohio, release thousands of monarch butterflies for fall migration, rear the federally endangered Mitchell’s satyr butterfly, restore native prairie habitat in urban Toledo, conduct research on the spatial ecology and population dynamic of several species of threatened turtles, conduct health assessments and vaccinations of local mesopredators, research the movement and presence/absence of native Ohio wildlife with trail cameras, conduct vegetation analysis on ecosystems around the region and work to support and restore native pollinators.